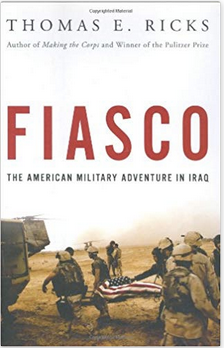 Fiasco: The American Military Adventure In Iraq remains one of the pre-eminent military histories of the early years of the U.S. war in Iraq. The book is broken up into thirds, with the first on the lead up to the 2003 invasion, the middle on the aftermath when the U.S. found it had no plan on how to bring about stability and democracy to Iraq , and then the end focuses upon 2004-05 when the resistance to the occupation increased and the U.S. still couldn't fully adapt. The strength of the book is writer Tom Ricks’ depth of knowledge about military affairs. The title is his thesis, meaning that he argues that the Bush administration never had a strategy to win in Iraq because it misconstrued what kind of conflict it was getting into.


Ricks wrote there were two original fiascos of the Iraq war, first that all the arguments for it were false, and second that the U.S. had no plans on how to achieve its goals. Ricks called the first the “fruit of the poison tree” when the claims against Iraq about WMD and ties to Al Qaeda not only proved to be untrue, but then no one was held responsible because the government never really admitted it was wrong. Even after no WMD was found President Bush and others continued to claim that Saddam Hussein was a danger to the world, and then simply moved on. America lost a huge amount of credibility as a result. Even more important the White House said its end goal was a democracy in Iraq, but never came up with how that was to be accomplished. The main fault lay in the fact that both the White House and the military simply thought in terms of removing Saddam and not about what was to come afterwards. Instead, the administration constantly argued that the postwar situation would be easier than the invasion and that the U.S. would be welcomed as liberators, while neglecting planning for after the war. Ricks holds President Bush ultimately responsible, but also the military and Congress for what the author believes was one of the biggest failures in recent American history. This was a basic lack of strategy. Ricks makes a very convincing argument. The main drawback was that he never provided a reason why President Bush wanted war. The book only has one sentence that claims Bush was eventually convinced that Iraq had WMD in 2002, which was not very satisfactory. This was a major problem for almost all of the U.S. books written during the occupation, that they failed to give an explanation for the cause of the war other than the administration’s own case of WMD and Iraq-Al Qaeda ties.

The next section of the book dealt with the failed occupation of Iraq. The day Saddam Hussein was removed was basically the end of the U.S. plans for the country. Everything quickly went wrong and the U.S. was left flatfooted. The Americans had nothing for the looting and then the emergence of the insurgency. This was made worse by a lack of coordination between the civil administrations and the military. The Coalition Provisional Authority took major measures like disbanding the Iraqi military and implementing deBaathification that were opposed by the military. On the other hand, each division in Iraq was basically left to its own devices and committed many acts that also made the situation worse. Ricks singled out the 4th Infantry Division then commanded by General Ray Odierno who later became the overall commander in Iraq for carrying out mass arrests of Iraqi men, abusing prisoners, relying far too much on indiscriminate use of firepower upon the population, and sending thousands of men to Abu Ghraib where they were mistreated. All these acts helped turned the Iraqis against the U.S. Finally, the White House refused to admit that anything was going wrong, and instead argued everything was getting better. Ricks compared what the U.S. was doing during this period from 2003-04 with counterinsurgency strategy that focuses upon securing the population from militants. The Americans were doing the exact opposite because they initially refused to even acknowledge the insurgency, and had no plan. Again, Ricks shows off his knowledge of the military by going through different writers on counterinsurgency such as French officers from its war in Algeria to modern U.S. thinkers that tried to advise the American forces in Iraq on what the occupation should have been like. He also did extensive interviews with civilians, soldiers and Marines in Iraq to give their personal perspective on what was going wrong at that time. Because the U.S. entered Iraq with no plan, it basically improvised its way through the first couple years to devastating effect.

The book finishes with the 2004-05 period when the problems in Iraq only grew. In 2004 there were the two battles for Fallujah and two Sadr uprisings. On the other side, the new U.S. commander in Iraq General George Casey drew up the first battleplan for Iraq one year into the occupation. While it included an attempt at counterinsurgency the Americans didn’t have enough troops, the Iraqi forces were in their infancy and neither was capable of holding onto any area that was cleared of insurgents or militias. Back in Washington Bush continued to resist any reports he received that things in Iraq were going badly. By 2006, the Americans were in the third year of occupation and still had no strategy and their opponents were only growing stronger. The result would be civil war. This was the continued fiasco. The problems that were there at the start of the Iraq war still had not been resolved. Again, the president must be blamed for his refusal to listen to what was going on and demanding that things change. Instead, he would pronounce again and again that he would stay the course. Ricks’ focus is again upon the U.S. forces in Iraq, which was his expertise. If he’d delved into the White House more he might have found the overall problem was that Bush was not hands on with the Iraq war. He delegated it to the Pentagon and the military. Secretary of Defense Rumsfeld had fought tooth and nail for the Defense Department to control postwar Iraq, but after the invasion, he lost almost all interest leading to the general drift in policy. The military was taking baby steps towards a counterinsurgency strategy, but didn’t have the resources or backing to make it work yet. Again, Bush was mostly oblivious and did not provide the necessary leadership.

Fiasco is still one of the best books to understand how everything went so wrong for the U.S. military in Iraq in the early years of the occupation. Ricks focuses upon how the American leadership starting with President Bush to Defense Secretary Rumsfeld to invasion commander General Tommy Franks down to the division commanders first deceived themselves about Iraq thinking it was only about regime change, and then only made the situation worse when the U.S. became the occupying power. Congress also never provided any oversight and partisan politics meant many didn’t want to question what was going on. Ricks also does a great job pointing out all the things the Americans should have done like come up with strategy on how to transform post-Saddam Iraq, and how counterinsurgency policies could have lessoned the resistance to the occupation. What Ricks wrote about was what the U.S. eventually did with the Surge, but that wasn’t until 2007, four years after the invasion when Bush finally figured out that Iraq was failing and made a change. That again highlights that blame starts at the top and it was Bush’s lack of inquisitiveness and stubbornness that were at the root of the problem.

Thanks for this.
Best,
Tom Ricks

Great book and a great review. I recommend Fiasco to anyone who wants to understand "how we got in that mess."

My heart breaks for the thousands of victims - American, Iraqi, or otherwise - of that shortsighted clown car of leadership.

Thanks for your great book Tom