September 2022 marked the end of the Islamic State’s annual summer offensive. It paled in comparison to previous years in the number and types of attacks the group was able to carry out.

There were a total of 41 security incidents reported in the Iraqi media in September. That compared to 57 in August. 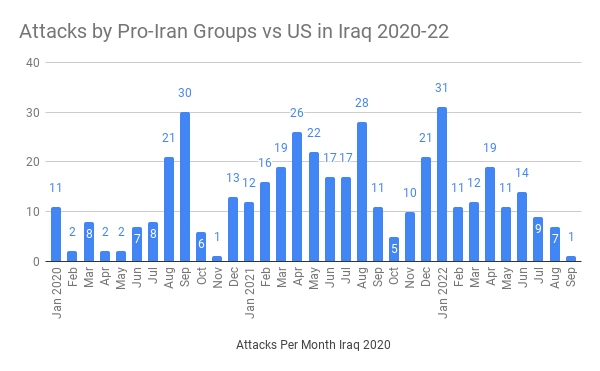 There was only 1 incident by pro-Iran groups during the month when they fired rockets at Irbil province. In August these factions carried out 5 attacks and 9 in July. The incidents have been declining as the Hashd factions have been more concerned about the formation of the next Iraqi government.

There were also 3 mortar and rocket attacks upon the Green Zone in Baghdad. One of them landed right in front a group of Iraqi Security Forces (ISF) wounding 7 of them. The first two incidents came as the Sadrists stormed the Green Zone in an unsuccessful attempt to stop parliament form re-affirming its support for Speaker Halbusi in a move towards picking a new prime minister. It would seem the Sadrists would be behind the shelling of the Green Zone but they denied it. It could still be them however. Moqtada al-Sadr is becoming desperate to try to block his rivals and violence is one of his last tools.

That left 37 incidents by the Islamic State. There were 49 in August and 37 in July which was when the summer campaign began. Before that there were 26 incidents in June. In 2021 IS incidents went from 62 in June to 90 in July and 103 in August before dropping to 70 in September. This is the latest sign of the decline of the insurgency which is barely holding on in Iraq.

Of the 37 attacks by IS during September only 6 were offensive. Those took place in Babil (2), Kirkuk (1), Salahaddin (2), and Sulaymaniya (1). The other 31 were aimed at keeping people and the government out of IS areas. None were in an urban area. Again this showed how limited the Islamic State is. Even during a campaign it can only increase the same types of operations it usually carries out and only in areas where it's present.