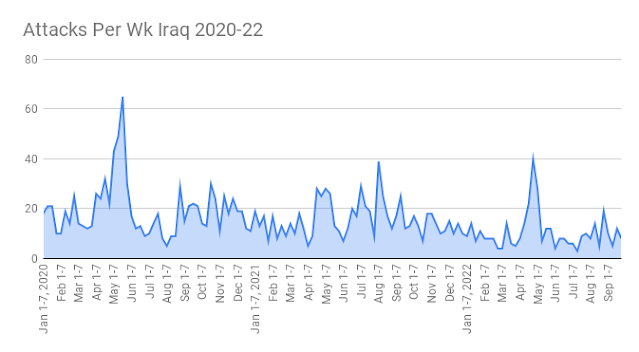 Attacks by the Islamic State have fluctuated up and down during the month of September. This is a sign that the group’s summer offensive could be ending. Pro-Iran groups have not carried out any attacks since the start of September although some militia group did fire rockets and mortars at the Green Zone this week.

There were a total of 10 security incidents in Iraq reported in the media from September 22-28. That compared to 12 the week before, 5 the 2nd week of the month and 11 the first week.

On September 28 parliament met for the first time in weeks to re-affirm Speaker Mohammed al-Halbusi. Twice that day the Green Zone was hit with rocket and mortar fire. 7 members of the security forces were wounded as a result. Who is responsible is unknown. The Sadrists are the likely culprits since they wanted to disrupt the legislature meeting but the group did deny they were involved.

That left 8 incidents by the Islamic State during the fourth week of September. Those incidents took place in Anbar (1), Baghdad (3), Diyala (2), Kirkuk (1), and Salahaddin (1).

They left 2 dead and 9 wounded. 2 members of the Iraqi Security Forces (ISF) were killed and 1 civilian and 8 ISF were injured.

In Anbar there was an infiltration attempt in Rawa along the Euphrates River. The province is mostly used as a transit route to move in men, families, and material into Iraq from Syria.

An IS den was discovered by the ISF in the Tarmiya district of northern Baghdad that led to a shootout and a suicide bomber being killed. 1 ISF was killed and another wounded as a result. A sniper also wounded a soldier at a checkpoint and an IED was dismantled both in that same district. For months there were hardly any incident in Baghdad. Now there are weekly ones and almost all of those occur in Tarmiya which has been a long time IS base.

1 soldier was killed and 2 wounded during a security sweep in Lake Hamrin, Diyala which ran into a group of IS fighters. An IED also wounded a civilian in the Muqdadiya district in the center of the governorate. Diyala used to be the most violence province in Iraq but incidents have steadily declined there.

An IED wounded 4 police in southern Kirkuk’s Daquq district. That area along with Diyala are the two centers of IS’s diminishing activity in Iraq.

Finally, an IED was dismantled in the Balad district of Salahaddin.

There were no offensive operations by the Islamic State during the week. All the attacks were limited to rural areas where there are few people and the violence has little impact upon Iraq overall.

NINA, "A boy was injured by a foreign body explosion in an agricultural orchard northeast of Baquba," 9/27/22

- "Detonation of an explosive device under control north of Baghdad," 9/25/22

- "Dismantling an explosive device that was placed on the side of the road between Samarra and Balad," 9/28/22

- "An Officer And Three Federal Policemen Injured In An IED Explosion In Kirkuk," 9/25/22

- "An ISIS terrorist who tried to infiltrate the valley sin Anbar was killed - Urgent," 9/23/22