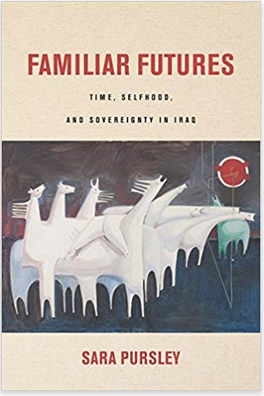 New York University Assistant Professor Sara Purlsey’s Familiar Futures, Time, Selfhood, And Sovereignty In Iraq covers the period from the British Mandate in the 1920s to the 1958 Revolution. It can’t really be called a history however because it only touches on certain events. Rather it’s Pursley’s musings upon different subjects from how the English saw the Iraqis to how the academic system was supposed to instill nationalism and then a western form of modernity to a U.S. sponsored agricultural project to whether the Qasim government was really revolutionary to the Personal Status Law the general passed to the Monument of Freedom in Baghdad’s Tahrir Square. Her expansive vision is seen in the introduction where she talks about gender, family, nationalism, and modernization. The problem is the author’s broad approach to Iraq doesn’t ever add up to a coherent vision of the country, and its academic writing, especially at the start would alienate all but the bravest graduate student and professor.


Familiar Futures runs into problems right off the bat in the introduction. It starts with the Iraqi Communist Party’s women’s league coming out into the streets of Baghdad during the popular demonstrations that welcomed the 1958 coup that overthrew the monarchy. Pursely then explains how she is going to write about how gender plays out in theories of history. Then she adds that she wants to look at how the concept of children is often used to promote ideas of modernity. She’s not done however because she also wants to include nationalism, sovereignty, and even economic development. It’s obvious that the author doesn’t want to be held down to just one subject, but including so many automatically raises red flags for the reader. This might have been a daring reading through history, but there’s no unity in the introduction, and that stays true through the rest of the book. Not only that but the start is deceiving. Pursely spends so much time talking about gender, you would think that would be a main theme but she doesn’t even touch upon it until the third chapter.

Even more important is that the introduction is full of theory. That means there is a ton of academic language that only another academic can really enjoy. For instance, she writes, “Koselleck and others have noted how the clock time and calendar time that measure modern homogenous linear time, and that have come to dominate quotidian life with the rise of capitalism and the nation-state, are predicated on uniform duration and endless repetition.” Or in another passage she notes, “This heteronormative discourse works to defer demands for political change in the present by placing on the “tiny shoulders” of the child the burden of embodying a political future that never arrives.” Unless one has a background in this type of writing there is no way one can get through it without getting completely lost. The first few chapters and the epilogue are similarly written.

The body of the book is no better. Chapter 1 on the British mandate is just like the introduction and covers a whole hodgepodge of issues. That includes how the English wanted to develop Iraq so that its resources could be exploited. How the British were going to use air power to rule. How it created a tribal law system. How the borders of Iraq had to be set with Turkey, and finally agriculture. This is meant to explain how sovereignty and modernity were brought to Iraq by the English. Chapter 2 and 3 are better and deal with Iraq’s education system. At first it was seen as a way to promote Arab nationalism, but then western influenced teachers took over and they wanted to instill a system that ensured people would stay in their place in society whether that be a peasant or a woman. For instance, the main innovation American trained teachers brought to Iraq was to spend more time on home economics for girls to prepare them to be housewives rather than academics, which was considered a waste of time for a developing country. Covering so many issues could have provided some fresh insights into early Iraq. The language however continues to be a drag like when she describes Royal Air Force bombings of Iraqis as “Not a biopolitical technology at all, but a necropolitical one”, although it does get better in the middle. More importantly skipping topics means that the reader may not be interested in all the things covered.

You can’t fault Pursely for being ambitious. She had a vision, which included going through various issues at the start of Iraq that revealed how things like modernization and gender played out. So many issues are covered that it also makes it hard for someone to maintain their interest because while they may like a few things Pursely writes about, they may not like the variety of others that are included in Familiar Futures. Most importantly her style failed her. Only highly educated readers from the Social Sciences can get through this book.