Revised Review Fallujah Redux, The Anbar Awakening and the Struggle With Al-Qaeda 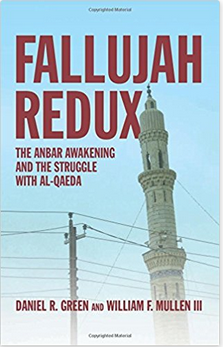 Fallujah Redux is not about the two well known Battle of Fallujah fought in 2004, but rather how the U.S. and Iraqi forces along with local tribes attempted to secure the district during the 2007 Surge. It was written by Daniel Green who was a Naval Reserve officer and General William Mullen III who commanded the 2nd Battalion of the 6th Marines at the time. Green worked with the Fallujah government and on a tribal outreach effort, while Mullen was involved in combat operations. The book is written in an interesting style with each author trading off chapters writing about their specific experiences. When they arrived in the city in 2007, it was feared that the insurgents had almost regained the initiative, and the Anbar Awakening, which had started in Ramadi had not stretched east yet. Green and Mullen were part of the U.S.-Iraqi effort that helped bring Fallujah back from the brink.


After the two battles of Fallujah the city had fallen into disarray. The Iraqi forces were a mixed bag. The Public Order Battalions and Iraqi army unit were mostly Shiites, and were known to harass, abuse and extort Fallujans. The situation had gotten so bad that U.S. units had to raid the order battalion bases to free illegally detained prisoners and to stop torture. The local police were lethargic, and would rarely leave their stations. The mayor only seemed to be concerned with his own personal safety and skimming money, while the city council was thought to be pro-insurgent. In the rural areas, most of the local sheikhs had fled to Jordan or Syria in 2004 and not returned because of the militants leaving a vacuum mostly filled by the militants. Rather than dealing with these problems, the Marines actually made the situation worse. They were trying to put the Iraqi forces in the lead, even though they were not up to the job. This was seen as a sign of weakness by the insurgents who increased their attacks as a result. In turn, most of the police refused to go to work out of fear. When Green and Mullen came to the city it was in a precarious situation, and the gains the U.S. thought it had made in 2004 had disappeared. There was a similar situation in much of Anbar. Local leaders were rare because the violence had driven many away or into submission. The government was dysfunctional, and the Iraqi forces were often times a part of the problem rather than the solution as the Americans hoped. Despite these problems, the Bush administration’s policy before the Surge was to push the Iraqis into the forefront so they could take on more responsibilities, and the American forces could leave. Green and Mullen’s jobs were to try to reverse this course of events.

Green’s chapters focus upon trying to get the tribes involved in fighting the insurgency and helping the Fallujah authorities to govern the city. The first issue took a lot of homework. Each tribe had dozens of sheikhs. That meant Green had to not only discover who all the local leaders were, but which ones had real authority and followers, and which did not. Once the meaningful sheikhs were discovered the Americans hoped to bolster their position through aid and projects. One such mean was allowing a sheikh to form a security detail of around 50 men, who would then get training to be policemen. That increased his patronage, and gave the U.S. a group of fighters it could hopefully rely upon. Those men would then help secure their tribal area with the hope that if the sheikh was in exile they would return and continue with the process of rebuilding the district. Within Fallujah, the main task was to get the newly appointed mayor Saad Awad Rashid al-Dulaimi to assert himself and run the city. The main problem was the Fallujah Tribal Sheikhs Council, which Green and others believed was working with the insurgency and attempting to take over the government. The city authorities were also under constant threat. The plan was to isolate the tribal council, while empowering the local authorities, and ensuring their safety. One thing Green did was challenge everything the Tribal Sheikhs’ leader Abu Bakr said at government meetings. He became so frustrated he stopped showing up. Green also put Mayor Dulaimi in contact with the provincial government in Ramadi to try to enlist its support. Through months of hard work, Green helped get many of the tribes organized and armed, and the Fallujah mayor and council to start governing. This is important chapter because it describes just how difficult tribal outreach was in Anbar. Since the Awakening a cottage industry developed in America that pushed the narrative that once the U.S. began supporting sheikhs in Anbar they were able to organize an effective fighting force and turn the tide upon the insurgency. Not only that, but that model could be exported to other countries like Afghanistan. Green highlights that tribes are very amorphous with all kinds of different loyalties and leadership, which took a lot of time just figuring out let alone working with. Because of that they are also inherently unstable and couldn’t be relied upon in the long term, even though that’s not a topic in the book. Simply holding elections was also not enough to get Iraq’s government working either. Politicians had to deal with political rivalries, tribal differences, the insurgency, and many were simply greedy and wanted to enrich themselves. Trying to find real leadership was another difficult task the Americans found themselves handling.

Mullen was in charge of military operations, and had to seize back the initiative from the militants. That began with getting the Marines out in the streets again, which often led to gun battles, especially in the south. Next was standing up the Iraqi police and army. The police had a good chief Colonel Faisal Ismael Hussein al-Zabai, but he was woefully disorganized. Mullen eventually believed that a dramatic change in tactics and strategy was necessary. The Marines sent a unit to Ramadi to observe the methods they used there to secure the city, so that they could be duplicated in Fallujah. That included breaking the city up into districts, setting up concrete barriers to limit car bombs, create a cordon around the city to control movement in and out, build Joint Security Stations made up of U.S. and Iraqi forces, recruit locals to form neighborhood watch groups, and then isolate and degrade the militants. Once security improved in one area, community clean up and small reconstruction projects would start, locals would be empowered to help run things, and then operations would begin on the next district. That got underway in May 2007. By October, incidents had dropped from over 500 to just 80. Finding an effective counterinsurgency policy in Iraq happened largely by trial and error out in the field rather than from a manual or from the top. The U.S. had actually started with many tactics that were counterproductive and made the security situation worse. What happened in Ramadi, which was copied in Fallujah, was discovered by having the right officers and coming at a time when several local sheikhs had it with the insurgency and were willing to work with the Americans. This had been building up across parts of Iraq for quite some time, but had not been effectively exploited by the Americans until the 2006-07 period.

Most of the books on the Surge focus upon Baghdad since it was the center of gravity for the war. Anbar however, was an important part of the campaign. Fallujah Redux provides important information on how that battle was fought through a combination of replicating the successful counterinsurgency tactics of Ramadi, and engaging the local tribes and government. The U.S. did a lot of the heavy lifting but without Iraqi partners they could only do so much. It was only through a successful partnership between the Americans and Iraqis that things were turned around during this period.