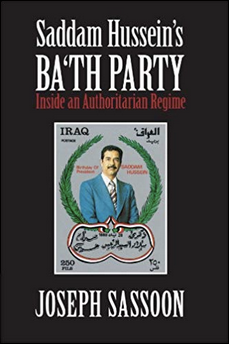 Georgetown’s Professor Joseph Sassoon was one of the first to go through the captured Baathist documents that now reside within the United States and use them as a basis for a book. The result, Saddam Hussein’s Ba’th Party, Inside an Authoritarian Regime documents how Saddam and the Baath were able to stay in power for thirty five years. Many believe that dictatorships simply rule through fear. In fact that was the basis of a famous book about Saddam’s time The Republic of Fear. Sassoon however points out that the real secret of longevity was the rewards as well as the punishments that the regime offered, its penetration of nearly every aspect of society, and how the combination of those factors co-opted large parts of the public to buy into the system rather than resist.


The first part of Sassoon’s thesis, that Saddam ran an authoritarian rather than a totalitarian system is a bit controversial. Sassoon constantly compares Baathist Iraq to Hitler’s Germany, Stalin’s Soviet Union, and Mao’s China, which were all totalitarian in nature. Others that have studied the Baathist documents such as Aaron Faust in The Ba’thification of Iraq also noted those parallels and came to the conclusion that Saddam was a totalitarian. Sassoon however believes that because the Baath did not set up a command economy Iraq during this period it cannot be put in that category. To be a true totalitarian every aspect of a country must be controlled. The same could be said of Nazi Germany, which also upsets Sassoon’s point. Totalitarianism seems to be the appropriate characterization of Baathist Iraq. The party sought to control everything, so even though there were capitalists, they too followed the government’s directives.

History was one of the elements Saddam and the Baath Party studied to ensure that they would stay in power. Iraq had a history of military coups starting in the 1930s. In 1958 the Baath supported the military overthrowing the monarchy, but had no real role in the Qasim government that came to power. That would change in 1963 when the Baath joined with the army to topple Qasim. The officer corps however quickly expelled the Baathists, but not before they went on a little reign of terror executing hundreds of Communists and other opponents. The new Arif regime attempted to co-opt the country’s tribes and put loyalists from his clan into the military to control it. The Baathists were originally a pan-Arab party, but arguments with Egypt’s Gamal Nasser led it to appeal to Iraqi nationalism more. Finally, after the 1963 coup the party split, which made it easier for it to be kicked out of the new government. In 1963 the Baath weren’t ready for power. They’d spent all their time scheming rather than preparing to rule. They did not want to make that mistake again. That was especially true of Saddam who was said to be a student of Iraqi history. He and the party wanted to make sure that the next time they overthrew the government would be the last. Saddam made sure that the Baath were not only united, but got rid of all of his opponents both real and suspected within the party. The military wing of the party was quickly subjugated and the armed forces was put under control similar to what the communists did via commissars and controlling the officer corps. The Baath constantly pushed enrolling new recruits so that it had wide representation throughout the nation. Finally, Saddam used his extended family to run important parts of the government. At the same time, he made sure none of them, even his two sons, acquired too much influence that might challenge him.

Simply not repeating the past was not all that was behind the long Baath rule in Iraq, it’s control of society was what was really important. The Baath created an extensive bureaucracy of security agencies, party organizations, and paper work, along with carrots and sticks to influence nearly every aspect of the country. There were four man security agencies that spent the majority of their time surveilling Iraqis. Iraqis were encouraged to inform upon each other to keep in good graces and receive benefits. That included an extensive array of  spies to collect everything from coup rumors to daily gossip, which was important to keep tabs on what the public was thinking in case that might lead to unrest. The sticks are all too well known in Iraq. Saddam had no problem imprisoning and murdering his countrymen, even close friends and relatives. The carrots however are largely overlooked but even more important because no dictator can simply rule through fear. A regime has to make the public believe they have something to gain from the system to ensure there is not constant revolts over the repression. There were all kinds of medals, badges, and ID cards that gave privileges. That was meant to encourage the people to work with instead of against the authorities to gain a house or land or higher pay. Finally, there were hundreds of documents citizens, the military and party members had to fill out to achieve anything such as getting married that included extensive information about their friends and family. That gave the party records on everyone and nearly everything. That was integral to observe what was going on to control the nation. While there was always resistance, the Baath and Saddam were able to hold onto power from 1968 to a foreign invasion in 2003. That’s because they dug their claws deep into Iraq. This was the main addition of Sassoon’s scholarship to the understanding of this period. His emphasis upon the benefits the government offered people was something completely new to the conventional wisdom about Saddam’s rule.

Finally, near the very end of the book Sassoon weighed in on the Faith Campaign which Saddam started in the 1990s in response to the growth of Islamism across the Middle East. There are various theories about this strategy. Some believe that the Baath were always secular and simply tried to co-opt Islam to stay in power. Others think Saddam really embraced religion at this time. Sassoon would fall into the former camp. He argues that the government remained suspicious of religion until the end and sought to monitor and control it just like every other part of the country. That fits in with the rest of Sassoon’s theory of Baath rule, and goes along with much of the scholarship as well.

The main problem with Sassoon’s book is that sometimes he goes into too much detail. The chapter on the party structure for example has too much minutiae, which really bogs down the reading. He runs into that same issue in other chapters as well. This was probably inevitable given the source material. Having gone through hundreds, even thousands of documents Sassoon was going to write about them in as much details as he could to show off his research. While that’s good for academia, it’s not so good for the average reader.

Despite that Saddam Hussein’s Ba’th Party is an essential read to understand this period of Iraqi history. Other books have followed in its path, but Sassoon was the first to break down the extensive system that was created to control an entire people, and largely succeeded. Despite various setbacks such as the 1991 uprising following the Gulf War, the party was able to adapt, change and recover to stay in power. That wasn’t just due to all the arrests, torture, interrogations and executions, but an extensive system of rewards that were offered as well. That allowed the Baath to co-opt large swaths of the population.