Revised Review Nights in the Pink Motel, An American Strategist’s Pursuit of Peace in Iraq 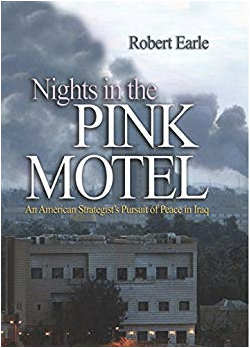 Robert Earle was a veteran State Department official who was in retirement writing books when he was called back into service by John Negroponte who was just appointed the U.S. Ambassador to Iraq in the summer of 2004. Negroponte wanted Earle to be his “thinker.” His book Nights in the Pink Motel is divided into four sections. Three of those focus upon Earle writing strategy papers for Negroponte and U.S. commander in Iraq General George Casey. The middle section is when Earle got a blood clot in Baghdad, which forced him leave Iraq, and head to Germany for medical treatment. Earle writes in an easy and informal style, and the book reads like a journal rather than a formal account of events. The main take away from The Pink Motel was that the U.S. dug itself into a hole the first year in Iraq, and even when it tried to come up with a strategy to pull itself out, it fell short.


In June 2004, Negroponte arrived in Iraq as the new ambassador and brought Earle along to draft a new approach to deal with the country. First, he was to define who the enemy was in Iraq. Earle brought together a small Red Cell and went through four major groups. First were Shiites backed by Iran. Tehran wanted the U.S. to fail in Iraq and make sure Baghdad was no longer a threat. It used its various ties to Shiite parties to achieve those two goals. This was considered a secondary issue because the Iraqi Shiites wanted political power, and turning to violence would be a distraction from that. Second were foreign fighters and those aligned with Al Qaeda. They were a security threat, but were very small in number. Third was the insurgency made up of former regime elements (FRE) and Sunni rejectionists. The FRE wanted to return to power, while the rejectionists felt like they had lost their rightful place in the country and resented the changes the 2003 invasion brought. Their strength was that they could wait for years and outlast the Americans. Finally, the Coalition itself was discussed. The U.S. was upsetting a range of groups and caused disorder just with its regular routines. The cell also went over the $18 billion reconstruction effort started under the Coalition Provisional Authority (CPA). It found that the program was completely separate from U.S. goals in Iraq. It consisted of multi-year contracts to build large infrastructure projects and employed few Iraqis. It neither helped fight the insurgency, nor won over Iraqis. The cell felt they needed to show immediate results, and give Iraqis jobs. The United States Agency for International Development (USAID) was different as it worked on developing Iraqi human capital so that they could plan and execute their own projects. USAID however didn’t coordinate with the larger CPA plan. Based upon these findings the Red Cell wrote a strategy paper of rooting out the insurgency, getting those on the fence to join politics, protecting the coming elections, training and equipping the Iraqi forces, getting the United Nations more involved, encouraging Sunnis to join politics, and helping Iraqi politicians do their jobs. This became the first Joint Mission Statement and Campaign Plan for Iraq one year into the war, and was signed off by both Ambassador Negroponte and the U.S. commander in Iraq General George Casey. Earle’s account showed just how far behind the curve the Americans were in Iraq. A year into the war and they were just drawing up their first strategy. The lack of one resulted in the CPA, USAID and the military not coordinating their operations. Without unity of command no country can be successful, and explains why the Americans were in such trouble early on in Iraq.

The second time the Ambassador called he wanted Earle to write a long report for the White House on all the problems the U.S. was facing in Iraq. Negroponte asked for the paper to look 5-10 years into the future, and what could be done. Earle was given a small pink room, which he dubbed the Pink Motel, hence the title of the book. When he gave the draft of the paper to Negroponte he thought it was too negative for Washington, and told Earle to cut it to just the main issues and solutions. In the end, it was only a few pages emphasizing economic reform, switching the U.S. military role from combat to providing aid, more money for training the Iraqi forces, more international engagement, getting Europe and NATO to help develop the security apparatus, and a larger role for the U.N. Negroponte would later tell Earle that he didn’t think the paper went over well as President Bush did not like bad news. Again Earle highlights the difficulties the Americans were facing early on. They were in a multi-year occupation of Iraq which was failing. To right the ship they would need a much more massive and concerted effort, but the president didn’t want to hear about it. That was the reason why it would take another three years for the U.S. to come up with a successful strategy because the president didn’t think anything was wrong.

Earle’s third and final trip to Iraq was focused upon the January 2005 parliamentary elections. Negroponte wanted one plan for how to deal with the balloting, a new Joint Mission Statement for 2005, and an agenda for the incoming Iraqi government. Earle divided the mission statement into security, diplomatic, economic, and political concerns. The main job for the Coalition was training the Iraqi forces, degrading the insurgency and protecting the elections and new government. Earle also came up with three scenarios for the balloting including if they did not occur. Finally, the U.S. strategy was used as a basis for what the new Iraqi politicians would have to do. There was a major flaw in this planning. General Casey wanted to transform the U.S. presence from fighting the insurgency to supporting the Iraqis. The problem was the militants were not defeated, the Iraqis were nowhere near close to being able to fight it, which meant politics would always be threatened. Casey’s ideas were based upon his orders to organize a withdrawal of American forces from Iraq. Hence pushing the Iraqis into the lead was supposed to relieve the U.S. of responsibilities and allow them to leave the country by 2006. The fact that the Iraqis weren’t ready didn’t seem to matter. That along with the increasing violence meant that Casey’s plan was eventually abandoned, but again, it took two more years for that to happen.

Earle was then struck by the disconnect between Iraq and Washington. First, newly appointed Secretary of State Condoleezza Rice arrived to do a review. Earle thought her staff were haughty and came in proclaiming that they were going to fix everything. Earle compared their hubris to the CPA’s. Next, Negroponte was appointed the new National Intelligence Director after just nine months in Iraq. Earle had completed all these strategy papers and now there was going to be a new ambassador and everything would start from scratch on the political side. That in a nutshell was a major reason why the Americans had such problems in Iraq. The U.S. came into the country with such great plans, but then things didn’t work out, and people were left asking why. From just 2003-2005 Iraq had seen the Office of Reconstruction and Humanitarian Assistance, the Coalition Provisional Authority, and then less than a year of Negroponte. Then Ambassador Zalmay Khalizad would be appointed and a brand new strategy would be drafted all over again. Most importantly President Bush didn’t see anything wrong with this state of affairs. He thought things were going well, and rejected negative news. That lack of direction from Washington and the constant turnover in Iraq would lead to many lost years.