Revised Review Iraq, In the Eye of the Storm 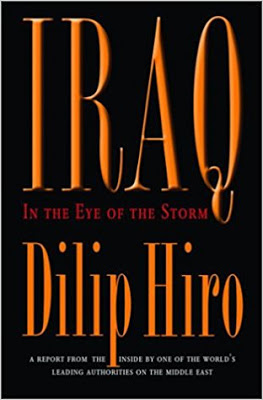 Dilip Hiro was one of the few people consistently covering Iraq from the 1980s-2000s. Iraq In The Eye of the Storm covers the country from the Gulf War right up to before the 2003 invasion. Each chapter has a theme such as life for ordinary Iraqis under sanctions, the Iraqi opposition, the Kurds, the impact of 9/11, etc. The three most interesting parts were on the mid-1990s plots against Saddam, the coup proofing of the regime by Saddam, and the U.N. weapons inspections.


First, in 1995 the Iraqi National Congress, the Patriotic Union of Kurdistan and the Kurdistan Democratic Party were plotting a revolt in Iraq. The plan was to attack Mosul and Kirkuk, that they hoped would cause a military collapse in the north. Baghdad would then have to send reinforcements. The INC was working with former military intelligence chief General Wafiq al-Samarrie who claimed he knew military commanders who would then kill Saddam. The rival Iraqi National Accord (INA) had its own plot underway and went to the CIA and successfully got it to pull its support. That led the KDP to abandon ship as well. The INC and PUK went ahead anyway and completely failed. The next year the INA launched its own coup, which was infiltrated by Iraqi intelligence, rounded up, and ended with the Iraqis calling the CIA telling it to go home. In the wake of the Gulf War, many Iraqi opposition groups believed they could get western backing and overthrow Saddam. Unfortunately the divisions within the movement also meant lots of rivalries and back biting. The INA convincing the CIA to stop supporting the INC-PUK-KDP revolt was just one example in that doom the effort. While none of these plots worked, it showed that there were many organizations who were quite active in the 1990s against the regime.

The Clinton administration didn’t give up and in 1998 Congress passed the Iraq Liberation Act. An ex-general and an ex-CIA official drew up a plan to seize sections of western and southern Iraq by the opposition backed by U.S. air power. When Baghdad responded, that would lead to a war and the overthrow of Saddam. The problem was the administration found no backing from regional countries that would have to be used as bases for this plan. Still, at the end of his presidency Clinton wanted something done about Saddam, but found few options. Many historians have said that Clinton was not really interested in regime change in Iraq. The president seemed content initially to follow the previous administration’s policy of containing Iraq via sanctions and weapons inspections. At the end of the Clinton years however, as Hiro noted the president had changed his mind, perhaps because he was tired of Iraq not coming clean about its weapons programs to the United Nations and finding loopholes in the sanctions after the Oil for Food program was begun. He was thinking more in terms of taking military action against Saddam but had not decided on regime change.

Another interesting chapter was on the survival instincts of Saddam. He was always afraid of coups and after several attempts withdrew into his inner circle and created more and more security forces and intelligence agencies to protect him. For example, the Republican Guard was created as an elite military unit that then turned to regime security, but when officers from the Guard were involved a plot, Saddam created the Special Republican Guard. Each of these organizations was placed under either a family member or a trusted ally. There ended up being at least a dozen agencies or military forces many of which were meant to police the others to block any coups. Saddam was a student of Iraqi history. One thing he learned was to be weary of not only the military but his own Baath party that could organize and overthrow him. He thus not only created multiple forces, but regularly purged them as well to stop any coalescing of opposition to his rule.

Finally, the discussion of U.N. inspections focused upon the increasing aggression of the inspectors and the U.S’s attempts to manipulate them in the mid to late 1990s. First, exasperation at the Iraqis continual denials led to the U.N. switching from finding their weapons programs themselves to how the Iraqis were trying to hide them. The inspectors worked with American, British and Israeli intelligence to try to break Iraqi communications to find out what the Iraqis did before a team arrived at a suspected site to discover which organizations and officials were behind the deception campaign. On the other hand, the Clinton administration went from backing the inspections to using them to try to overthrow Saddam. The White House wanted the U.N. to create confrontations with Baghdad that could then be used to justify military strikes to at first get rid of Saddam, and then to punish him. The CIA ended up placing their agents within the U.N. teams, planting their own devices within the U.N. monitoring and communication systems to spy on Iraq, and even used the inspections in an attempted coup plot by the Iraqi National Accord. Iraqi intelligence quickly found out about the plot and let things progress right up until the planned coup day when it called the CIA to let it know all the Iraqis involved had been rounded up and the Agency should go home. That’s exactly what they did. The U.S. didn’t believe Iraq was ever going to come clean about it nukes or WMD, so decided to use the inspectors for its own policies. In the end, the inspectors left at the end of the 1990s, and Iraq gave up on reviving its WMD and nuclear work, but the U.S. never knew about it. Those programs would then become one of the main rationales for the 2003 invasion.