Review It Takes More than a Network, The Iraqi Insurgency and Organizational Adaptation 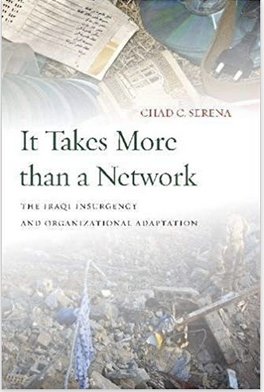 RAND analyst Chad Serena tried to explain the Iraqi insurgency using network theory in It Takes More than a Network. Network theory focuses upon how groups are organized, operate and respond to internal and external influences. It seemed like a new and interesting way to analyze the Iraq situation because it was so much different from previous guerilla wars. Serena ran into several problems however. First, was that he spent just as much time explaining the theory as the insurgency, which provided some very dry reading. Second, certain aspects of the insurgency would apply to multiple parts of the theory, so he would repeat them over and over. Third, he got a lot of the Iraqi insurgency wrong because he based his research off of the period when the insurgency was declining and missed its rebuilding. At the same time, the weaknesses he pointed out turned out to be what allowed the Islamic State to be successful in 2014. Overall, Serena made some interesting points but they get lost in the network theory.


The main drawback of It Takes More than a Network is that the author goes through each section of network theory that leads to lots of repetition. The emphasis upon network theory is apparent from the chapter titles: Chapter 1 The Nature of the Iraqi Insurgency, Networks, and Organizational Adaptation, Chapter 2 The Iraqi Insurgency – Organizational Inputs, and Chapter 3 The Iraqi Insurgency – Organizational Outputs, Learning, and Summary of the Adaptive Cycle. An example of the repetition this caused was that Serena wrote that the insurgency was diverse and non-hierarchical again and again because it related to different parts of the theory. Also reading about theory from beginning to end is not interesting. It means you have to dig through the text to find insights into the resistance to the U.S. occupation of Iraq. What Serena should have done was explain the basics of the theory, then go through the insurgency, and then relate the two together. That would have eliminated the repetition and the endless descriptions of network theory.

What was interesting was that Serena got the bigger picture of the insurgency wrong. His thesis was to explain why the Iraqi insurgency had declined by 2008-2009. He argues that the diversity and networked nature of the insurgency was what led to its undoing. There were various groups involved in fighting the Americans and the Iraqi government with diverse backgrounds from Baathists, to nationalists, to tribes, to the foreign Al Qaeda in Iraq (AQI). The one thing that united them was their opposition to the new Iraq, but that quickly collapsed as the other goals of the groups came into conflict with each other, most notably the Iraqis unwillingness to go along with the international agenda of AQI, its desire to create an Islamic state, and its emphasis upon targeting civilians. Serena wrote that the groups had to become more organized and hierarchical, to increase cooperation, learn from the changing environment as Iraqis were turning against their form of violence, and emphasize their vision of an alternative Iraq. His research appeared to be based upon 2003-2010 when the insurgency emerged, and then was defeated by a combination of the Awakening when tribes turned against the militants, and the Sahwa where insurgents defected and were willing to work with the Americans. His explanation was on point about what happened during this period, but what he got wrong was that he believed this was the end of the resistance to the new Iraq, when this was just one phase. He underestimated the ability of AQI to learn, adapt and cooperate. For example, he wrote that AQI showed no interest in governance at all, which showed that it had not aligned its means with its ends. What became the Islamic State however, did become more organized and hierarchical, and its declaration of an Islamic State was a vision of a new government system. It also learned from the Awakening and Sahwa and rebuilt its base within the tribes and created a broad base coalition of militants by 2014 that helped is seize Mosul.

The irony of It Takes More than a Network is that the weaknesses Serena pointed out as the failure of the insurgency turned out to be what the Islamic State eventually figured out and led to it seizing territory in Syria and Iraq. He continuously wrote about how the insurgency was adaptive, but thought that it had reached its limit and was no longer able to cope with the changing dynamics of Iraq, which led to its downfall. It turned out the Islamic State studied and learned from its mistakes and worked upon reversing them very successfully. That means Serena provides some interesting insights, but not the way he intended. The reader also has to dig through all the network theory to find it. That’s probably asking too much from the average reader meaning this is aimed at the specialists.