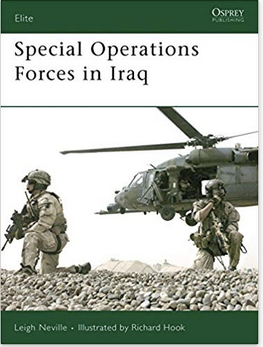 Osprey publishes short, general military histories, with lots of pictures and colored illustrations in the middle. Leigh Neville’s Special Operations Forces in Iraq mostly focuses upon the Coalition special forces during the 2003 invasion of Iraq, with a little on what they did afterward. For a brief overview Osprey always does a good job although this one could have done better without all the military acronyms and more maps.


The first half of the book goes over the American, Australian, British and Polish special forces during the 2003 invasion of Iraq. They had four main tasks. First, U.S., Australian and British forces were deployed to western Anbar looking for SCUD missiles and to secure the cities on the Euphrates River along the Syrian border. Second, American special forces were flown into Kurdistan to work with the Kurdish Peshmerga to hold down 13 Iraqi divisions so that they could not be sent to Baghdad, and to destroy the Ansar al-Islam base, a jihadist group with connections to Al Qaeda, in Kurdistan near the Iranian border. Third, U.S. Delta operators and Navy SEALs, along with Polish and British forces seized the oil infrastructure and ports in Basra, and then moved north into the major cities of southern Iraq. Fourth, a Delta team looked for WMD, seized Haditha Dam in Anbar, and then moved into the city of Tikrit to try to capture high level Baathists. This was a huge deployment of special forces from multiple countries. Many of the Americans had just come from Afghanistan and didn’t even have all of their equipment. The 10th Special Forces Group left all their vehicles in Afghanistan for instance, and had to smuggle commercial vehicles into Kurdistan via Turkey. The forces were not only involved in combat but also set up new administrations in several Iraqi cities. Some of these operations were far more successful and intensive than others. The hunt for SCUDs and WMD for example was largely fruitless. In comparison there was heavy fighting in the north and south. Because this is the largest part of the book it provides the most depth and is the most interesting. The one major drawback is that it could have used several different maps to show where these operations took place. Instead there was just one large map of Iraq with the ethnosectarian regions shaded for some reason. That had nothing to do with anything mentioned in the book.

The second half of the book is split between color panels, post-invasion operations, and the weapons and equipment used by the different forces. Special forces were involved in the killing of Saddam Hussein’s sons Uday and Qusay, the killing of Abu Musab al-Zarqawi the head of Al Qaeda in Iraq, and forming and training the Iraqi Counter Terror Unit and special forces. There are some interesting tid bits revealed such as the British SAS wanted to a night time raid to arrest Uday and Qusay but the U.S. military overruled them and launched a day time operation that led to an extended battle involving anti-tank missiles and helicopter strikes to get just two brothers out of a single house. The other tasks of the special forces are only talked about in the most general terms, which is unfortunate since they were said to have played a crucial role in taking out the leadership of the insurgency. Probably because the book was published in 2008 when there was still major combat going on many of these operations were still classified and more information was not available. The section on the weapons and equipment was sorely lacking as well because Neville went through all kinds of guns for example that could have used more pictures to distinguish one from another. Otherwise to a casual reader one gets lost in all the names and variations.

Speaking of getting lost, another drawback of the book was the endless military acronyms. The readers easily gets drowned in abbreviations like SFG, ODAs, GMVs, SR, etc. that cover every page. A glossary of terms was sorely needed.

Overall, any Osprey publication like Special Operations Forces In Iraq is really a basic beginners book on a military topic. There was a large deployment of Coalition special forces during and after the 2003 invasion of Iraq, something that has not been written about in much depth. The first half on the invasion is good the second half if lacking in details. Still, if one wanted to get a start on this topic this would be a good start.