Islamic State’s Revenge Of The Levant Campaign In Full Swing


In April the Islamic State announced its latest spring-summer campaign the Revenge of the Levant after the loss of its last territory in Syria. Things started slowly that month, but they were in full swing by May with the highest number of attacks since October 2018.


There were 137 incidents recorded in May with 136 of them by the Islamic State. The one exception was when a pro-Iranian group fired a rocket at the Green Zone as tensions between the U.S. and Iran increased. This was the highest monthly total since 171 in October 2018. Diyala and Kirkuk with 35 each led the country during the month. Anbar was the only province where violence went down, while attacks were flat in Babil and Baghdad. 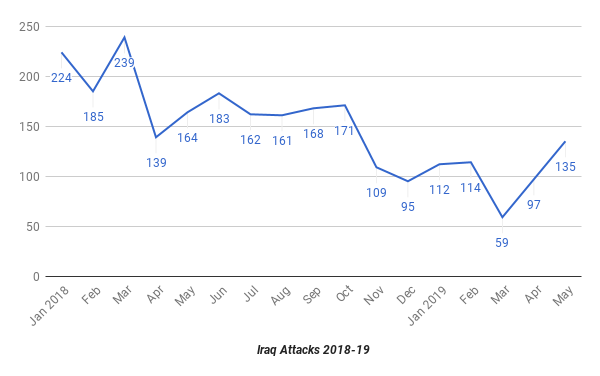 There were 163 deaths and 200 people wounded in May. That included 35 Yazidis found in a mass grave in the Sinjar district of western Ninewa. In total, 1 Peshmerga, 18 Hashd al-Shaabi, 23 Iraq Security Forces (ISF), and 121 civilians lost their lives and 37 ISF, 43 Hashd, and 120 civilians were injured. Kirkuk with 29 dead and 78 wounded had the most casualties during the week.

Anbar saw a decrease in violence with 16 incidents in April and only 8 in May. However, that included two car bombs in the west. The last vehicle bomb in Anbar occurred in the first week of April. 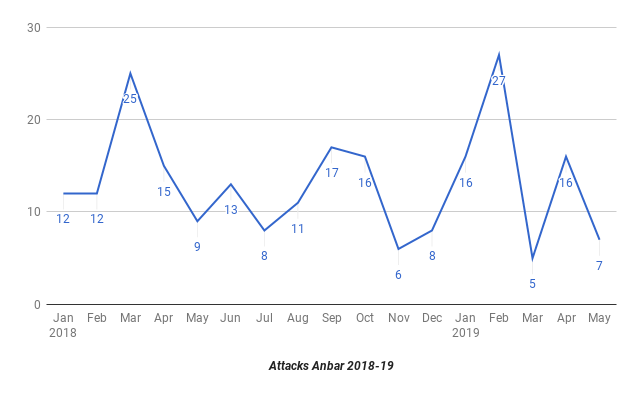 There were 3 incidents in Babil in April and 3 again in May. Two of those occurred in Jurf al-Sakhr in the northeast and one in Mahawil in the center. This province is largely a forgotten front. When IS does attack it’s almost always in Jurf al-Sakhr, which is accessible from Anbar. The district was emptied of people who have not been allowed to return since then because it is along the main highways pilgrims use to go to Najaf and Karbala. It is now a military base for the Hashd, which is why IS usually strikes there.

Violence was flat in Baghdad with 10 incidents in May and 10 in April. IS has largely forgotten about the capital as it rebuilds. The group may be trying to return to the province however. A car bomb was discovered and dismantled in the west. There also might have been a suicide bombing in Sadr City during the month, but that was disputed. Returning to the urban centers is the Islamic State’s ultimate goal. That’s where the money is and how it can challenge the government so it eventually has to make a comeback in Baghdad. 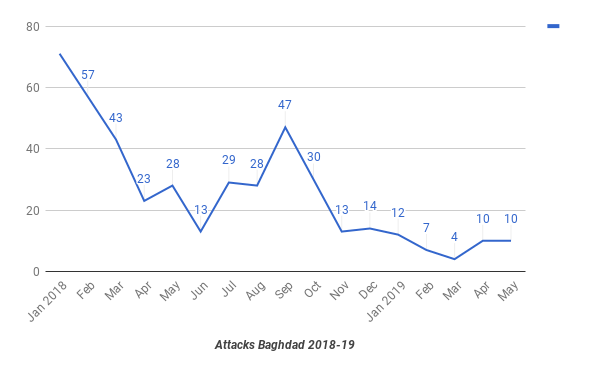 Diyala is where IS has its strongest presence. It never seized any territory there in 2014 so it was the first place the militants reverted back to an insurgency. It has been rebuilding there ever since and now has access to all of the rural areas in the province. It has expanded northward into the Khanaqin district since the federal government took over the disputed areas from the Kurds. That’s because it does not have the forces to adequately secure those areas. 14 of the 35 attacks during the month were in Khanaqin. 35 was also the most incidents in Diyala since 35 in October 2018. Because of the Islamists’ strength there it was one of the first places Revenge of the Levant began with attacks going from 17 in March to 30 in April. 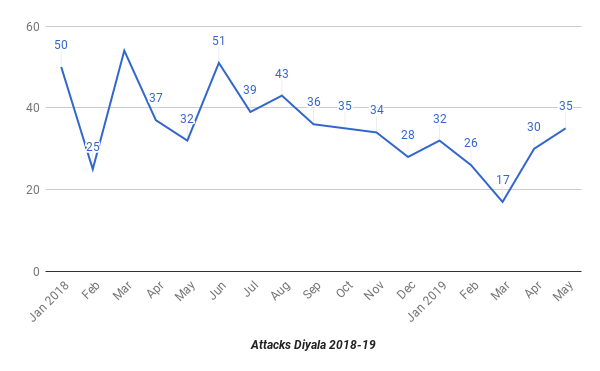 Kirkuk also had 35 incidents. That was up from 13 the month before. It was the site of the largest attack of the month when 6 IEDs went off in Kirkuk city with another two being defused before they could explode. That left 5 dead and 35 wounded. Kirkuk is one of the urban centers that IS still has regular access to. 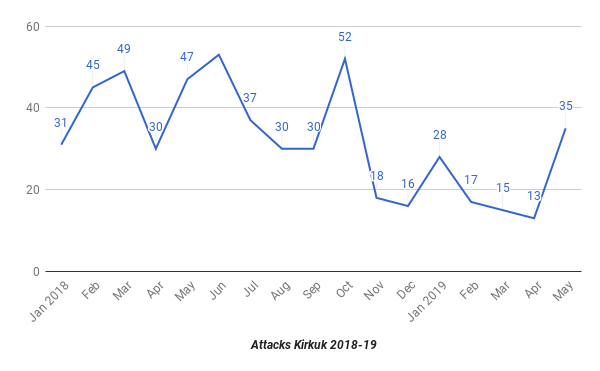 Like Diyala, the new IS campaign started in April in Ninewa. There were 11 attacks in March, climbing to 19 in April and 25 in May. The insurgents were able to set off two motorcycle bombs in Mosul, and a truck bomb hit a market in the Rabia district in the west along the Syrian border. IS is active in the west and south of Mosul and still has elements in Mosul as well. 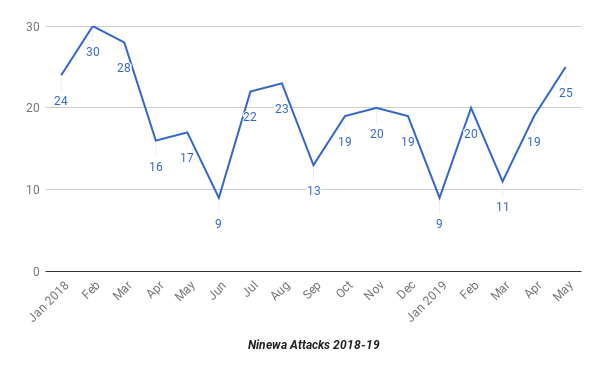 Salahaddin saw a large jump in incidents as well. There were 8 in March, 8 in April, and then 20 in May.  That included two attacks upon the Alas oil field in on week, both resulting in large gun battles. 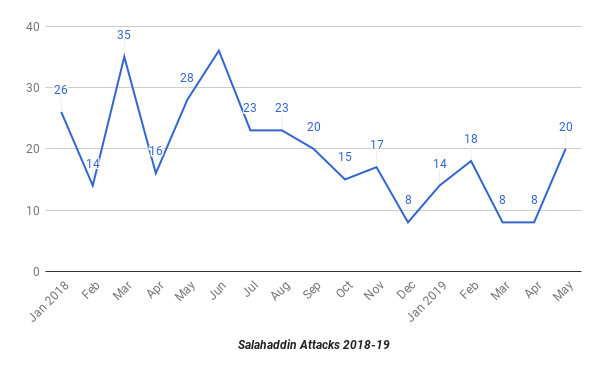 The biggest story was the fires the Islamic State set in fields across central Iraq. This happened in one farm in Baghdad, 9 in Diyala, 13 in Kirkuk, 5 in Ninewa, and 5 in Salahaddin for a total of 33. IS used the blazes to intimidate farmers to pay taxes to them and to also drive people out of their towns so that the militants could use them as bases. There were far more fires that were the result of a mix of accidents, the start of the hot season, and local disputes over land.

Violence By Province May 2019

Shafaaq News, "Killed and injured six members of the energy police in Salahaddin," 5/22/19