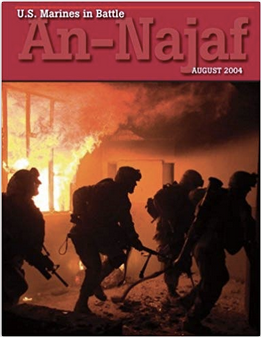 U.S. Marines in Battle, An-Najaf August 2004 is the official Marine history of the second battle for the southern Iraqi city. It gives a detailed day by day account of the Marines, later backed by the Army and Iraqi forces as they attempted to destroy Moqtada al-Sadr’s Mahdi Army. It does an excellent job describing the American side of the fight. What it lacks is an Iraqi perspective and a political understanding of the battle.


When the Marines took control of the Najaf and Qadisiya provinces in July 2004 they were immediately confronted with the Mahdi Army. The militia had risen up in Baghdad and southern Iraq in April 2004 before signing a truce in June that they would disarm. They never followed through with that agreement, and were carrying out a campaign to intimidate the local government and Iraqi forces (ISF). The Marines decided their strategy would be aggressive patrols to try to wrest control of sections of Najaf City back from the Sadrists and intensify their training of the local ISF. This policy only lasted a few days as it quickly set off the second Battle of Najaf. To the Americans Najaf appeared to be a city out of control as the Sadrists had free reign. As the Marines were a brand new unit to Iraq they wanted to assert their power and authority, which could lead nowhere else but a confrontation.

Within a week of the Marines arrival in Najaf the second battle for the city began. That started with a patrol that led to a gun battle and then the Mahdi Army retaliating with an assault upon a police station which brought the Marines in. This takes up the vast majority of the book as the Marines were pulled into a bigger and bigger fight that they never planned for. The main areas of confrontation were the Wadi al-Salam Cemetery and the Old City where the Imam Ali Mosque was located. The fighting in the cemetery was the most intense with huge mausoleums that extended for several floors below ground providing the perfect hideouts for the militia. The Marines eventually got reinforcements from the Army, Polish Special Forces, and ISF with U.S. Special Forces advisers. They also brought to bear a huge amount of fire power from armored personnel carriers to tanks to helicopters to AC-130 gunships to bombings. The Mahdi Army only had assault guns, rocket propelled grenades, and mortars, took huge casualties, and yet never backed down. The battle started August 5. By August 7 the Marines lost 5 killed and 60 wounded while it was estimated that the Mahdi Army suffered 350 dead and hundreds wounded. That day the Marines also believed they were so out numbered they were never going to take the cemetery and retreated. This was where the book starts running into problems. Kozlowski claimed that the Sadrists’ morale was faltering and yet he acknowledged that the Sadrists were not retreating and it was the Marines that had to pull back. He also quoted a Marine commander in the New York Times that said the Mahdi Army was desecrating the Imam Ali shrine. While Iraqis were definitely angry that Sadr had taken control of the shrine the main fear was that the Americans were going to damage it with their heavy weapons. Then later on Kozlowski acknowledges that point, and then contradicts himself by saying that the Mahdi Army was still highly motivated, and that they believed they had won because they forced the Marines out of the cemetery. The author proved great at the day to day details of the battle, but when it came to analysis he really left much to be desired.

The final section of the book deals with the final assault upon the Imam Ali shrine that was supposed to destroy the Mahdi Army, but politics got in the way. The Americans assembled 5,000-6,000 men from the Marines, Army, Special Forces, Iraqis and Poles to face down an estimated 2,000 Mahdi Army. The attack towards the shrine began on August 23. By August 26 the shrine was surrounded and the U.S. was getting intelligence that militia units were melting away. Later that day however the battle was called off and a ceasefire announced August 27. Ayatollah Ali al-Sistani negotiated a deal for the Sadrists to withdraw from the shrine. In 24 days of fighting the Marines lost 7 dead and the Army 2, along with 94 wounded. It was estimated that the Sadrists suffered 1,500 wounded alone. This is where Kozlowski again runs into problems assessing the outcome. He wrote that Sadr was defeated tactically, and that it was a major political victory. Sadr was removed from Najaf, it helped the standing of the Allawi government, and led to the okaying of the 2nd Battle of Fallujah. The author could have consulted with some more sources, especially Iraqi ones. Ali Allawi for example who was then the Finance Minister said that the 2nd Battle of Najaf was a defeat for both the Allawi government and the Americans. First, they both said that they would destroy the Mahdi Army, and that did not happen. Second, Sadr actually came out claiming victory because his militia stood up to the Americans and survived. His perspective obviously is the exact opposite of how Kozlowski saw things.

U.S. Marines in Battle provides a good day to day account of the Americans fighting in the 2nd Battle of Najaf, but the assessment could use a lot of work. The fighting was very intense and the author gives a blow by blow summary. His analysis and perspective on the impact of the battle however was off. The Americans said their goal was the destruction of the Mahdi Army, but it was allowed to fight another day due to the deal with Ayatollah Sistani. The fact that they left the shrine however is portrayed as a victory. Kozlowski can’t seem to put these two together however. In the end, that means the book is a good summary, but you would do better going elsewhere to find out the impact of the battle.