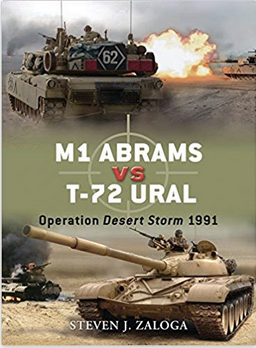 Osprey’s duel series is supposed to explain a battle pitting two iconic tanks against each other. M1 Abrams vs T-72 Ural by famed military historian Steven Zaloga focuses upon the 1991 Gulf War and specifically the American attack into the Iraqi flank meant to cut off Saddam Hussein’s forces so that they couldn’t escape from Kuwait. Unlike many in the duel series this one covers two major confrontations where US Abrams and Iraqi T-72 tanks actually fought each other.


All the duel series books follow the same format. First there is some background, then the development of the two tanks, their specifications, a breakdown of the two sides, the strategic situation in the war, and then the battle between the two forces.

Immediately Zaloga points out that the Iraqis were outmatched in the war starting with the technology of the two vehicles. Iraq’s T-72s that were purchased in the 1980s during the Iran-Iraq War were not only one generation behind their American counter parts, but had guns and inferior ammunition that couldn’t penetrate the front of an Abrams tanks, and complicated sights, which the Iraqis didn’t properly use. This was because the T-72 was an upgrade of the T-64 tank developed in the 1960s. The Soviet vehicles also had cramped interiors which didn’t allow the Iraqis to use them for extended periods without suffering from heat exhaustion. Despite that the T-72s were the best vehicles the Iraqis had and they even wanted to produce them, but the war disrupted that. The Abrams on the other hand was a cutting edge 1980s vehicle that had superior armor and fire control that allowed them to see the Iraqis before they could see the Americans. The rule of armored warfare is the first to see the enemy usually wins, and that’s what happened in the Gulf War. The Abrams had superiority in sighting, armament and armor. The vehicles had to be properly used however to exploit these advantages and the Americans did that as well.

The two sides were unequal in terms of strategy, tactics, and crew training. The top down organization and fear of Saddam meant that Iraqi units were given simple tasks to perform instead of relying upon individual initiative and taking advantage of situations as they presented themselves in battle. For example, Iraq relied heavily upon artillery, but pre-aimed it at specific areas, a tactic learned from the Iran-Iraq War, and did not re-aim them after they started shelling to hit their targets. Zaloga also wrote that the Iraqis were used to defensive battles from the Iran-Iraq War instead of the mobile war of the Gulf War and that was a negative, but the Iraqis were on the defensive in 1991 so that should have made them comfortable with their situation. Unfortunately, the technological advantages of the Abrams meant the Iraqi defenses were ineffective. Another important point that the author emphasizes was that the western reporting during the Gulf War was that all the Iraqis threw off their uniforms and fled without putting up much of a fight. On the western flank that was completely untrue. Almost all the Iraqi divisions stood their ground even though their resistance was futile. The Americans on the other hand, after the increases in defense spending by the Reagan administration had probably the best trained troops in the world. Unlike the Iraqis who were used to static warfare, the Americans believed in a war of maneuver and that was what the Persian Gulf battle plan was. The U.S. would attack towards Kuwait city to hold down the majority of the Iraqi forces, while a huge sweeping attack wound come from the flank to capture the Iraqis in Kuwait and block them from retreating back into Iraq. That would start with a major air campaign, something the Iraqis had never encountered before, which destroyed the Iraqi logistics and led to huge desertions from the regular Iraqi divisions. Like the two tanks the Americans had the decided advantage. They were going to launch a war, which the Iraqis were ill prepared to fight due to their poor command and control, and their out of date strategy and tactics.

The best part of the book is the section covering the Gulf War as Zaloga gives a blow by blow account of the fighting. On February 24 the Americans attacked along the Persian Gulf coast and in the western desert. The Iraqi commander in the west General Iyad al-Rawi ordered two armored divisions to block the American advance, but they were destroyed. The U.S. then ran into two Iraqi Republican Guard Divisions the Tawakalna and Medina. Based upon their Iran-Iraq War experiences, the Iraqis moved up their positions and then dug in their vehicles so that only their turrets were visible. They also set up behind ridges so that they could ambush the Americans as they crested the top. The problem was the weather was rainy and the visibility poor. The Iraqi sights on the T-72s could not see the American vehicles while the U.S. thermal sights clearly showed their opponents. The Iraqis also couldn’t use the complicated sights on the T-72s and usually pre-set them to fire at 1,800 meters and never adjusted them when combat began. The problem was the Americans started engaging the Iraqis usually at 2,500 meters and farther. That meant when the Iraqis shot their shells never even came close to the Americans. The same thing happened with the Iraqi artillery that fired on specific points and didn’t adjust which mean they never hit the U.S. either. In the battles of 73 Easting and Medina Ridge, which are highlighted in the book, the Americans clearly saw the Iraqis first and began hitting them before the Iraqis could even see them. When they returned fire their shells fell far short of their targets. The Tawakalna and Medina Divisions were destroyed as a result. Just one American division, the 1st Armored was credited with destroying 186 Iraqi tanks and 127 armored personnel carriers during these battles. In comparison, during the entire war only 7 Abrams tanks were hit by the Iraqis with none destroyed. Zaloga points out that the Iraqis in the west put up a feisty defense and never witnessed the mass flight that occurred in central Kuwait. That was heroic fighting because the Iraqis usually couldn’t even see the Americans who were shooting at them, but could view all their compatriots getting hit left and right. The Iraqi training, tactics, strategy and vehicles betrayed their effort however. This is by far the most enjoyable part of the M1 Abrams Vs T-72 Ural.

Many of the duel books suffers from building up a huge battle between two tanks and then not delivering because there are few to no actual details of any encounters between them. That’s not the case with this release. There were two huge battles during the Gulf War between Abrams and T-72s on the western front, which were well documented and provide the heart of Zaloga’s account. He provides excellent background as well about how the Iraqis were outclassed yet stood and fought, and how the Americans exploited all of their advantages. For anyone interested in the Gulf War or these two vehicles this offers a great read on both.

I didn’t read the book, but judging from your review, the book apparently ignored the Alliance air superiority, satellite and air surveillance and, especially, the role of the A-10s “Tank Buster” or “Can Opener” with its powerful 30 mm guns and anti - armor ammunition and Apaches to which some, if not most, of the T-72 hist could be attributed.

The book mentions that the U.S. air force claimed it destroyed 40% of the Iraqi tanks and 35% of the AFVs. The U.S. Army and Marines both think that was an over estimate. Even the air force's own figures would give the army and marines the majority of kills.

I remember a full brigade of Iraqi armored vehicles during the Khafji incursion into Saudi Arabia parked behind a large sand berm just inside Kuwaiti territory north of the town of Khafji. They were part of the 1st Iraqi Mech Infantry Division. Once spotted, we (I MEF) directed a massive number of aircraft to attack this brigade (roughly 100+ armored vehicles, if memory serves) and subjected them to non-stop attack for several hours. The entire time the Iraqi vehicles only moved tactically, mostly staying as close to the berm as possible, just backing up and moving back into position, sometimes moving several meters to either side.
Once the sun went down and the Iraqi elements in Khafji had withdrawn, this Iraqi brigade also withdrew. Post-strike BDA showed roughly 10 destroyed vehicles, although it was certain that many of the Iraqi vehicles had suffered some damage but not enough to provide a mobility kill. I know that we vectored at least 100+ aircraft in for series of strikes, to include AV-8 Harriers, A-6 Intruders, F-18A/B Hornets and F-15E Strike Eagles.
Needless to say, I was not impressed with the efficacy of airpower.
That said, I do understand that on the Iraqi side, from POW reports, the constant aerial strikes left them feeling psychologically isolated on the battlefield, that itself being worth the effort as the mass surrenders once the ground attack went in showed.