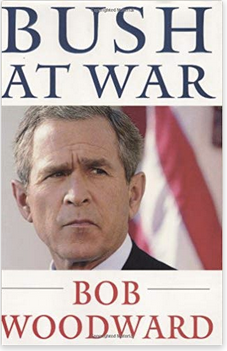 Bush At War was the first of four books by Washington Post reporter Bob Woodward on the Bush administration’s wars in Afghanistan and Iraq. This one covers the aftermath of 9/11 that led to the invasion of Afghanistan and then has a little on the public campaign for the Iraq War launched in 2002 in the Epilogue. Woodward provided important insight into how the Bush White House operated and how that led to failures in both conflicts.


Woodward began with the U.S. response to the terrorist attacks upon New York and Washington D.C. on September 11, which revealed the trends within the Bush administration that would shape not only the Afghan war, but the one in Iraq as well. Bush gave a televised speech on 9/11 where he announced the war on terror that included anyone that harbored terrorists. Those comments were made without consulting with National Security Adviser Condoleezza Rice nor Secretary of State Colin Powell. During the first National Security Council meeting on 9/11 the focus immediately became on how to respond to Al Qaeda. Defense Secretary Donald Rumsfeld constantly posed questions without ever taking a position on anything. The next day Rumsfeld suggested striking Iraq rather than Al Qaeda. On September 15 a meeting of all of Bush’s national security advisers was held at Camp David where Iraq was brought again by Deputy Defense Secretary Paul Wolfowitz. Bush ultimately decided that Al Qaeda would be first. At the same time, twice the president told his cabinet that he believed Iraq was involved with 9/11, but would be dealt with later. Bush also told Woodward he didn’t want the new war on terror to be used as a grudge match versus Saddam Hussein by officials like Cheney and Wolfowitz who had been with his father’s administration during the Gulf War. At the same time, the president said he acted on instinct and his gut, and never questioned or second guessed his decisions afterward. This was a very revealing history. First, there was a lack of coordination on Bush’s very first speech after the terrorist incidents. That would lead to major problems with Iraq for example, where you had three or four different organizations planning for the postwar situation completely independently of each other. Second, Rumsfeld was one of the most powerful secretaries within the cabinet who wanted sole control over the Afghan and Iraq Wars, and yet his style was to needle people with questions without making any major decisions. That would drive others in the administration and the military crazy. Third, Bush had Iraq on his mind right after 9/11. It was apparent in September that Afghanistan would be first in the war on terror, and then Iraq would be next. The president’s belief that it was connected to Al Qaeda would be the main motivator. Bush had no evidence for this, but like he told Woodward, he went with his gut and never waivered once he felt a certain way on a matter.

Another important part of Bush At War was the planning and lack thereof for the invasion of Afghanistan which would repeat itself with Iraq. The White House wanted to hit Al Qaeda and see how the Taliban reacted. When the two stood together the point of the invasion became regime change. By the end of September officials realized that would mean forming a new government and running the country for a period of time. The big debate within the administration however was Rumsfeld attempting to minimize the U.S. role in nation building and Powell trying to get officials to talk about the postwar situation. Even then the strategy papers that were distributed were all about the war with nothing on what was to come afterward. When cities started to fall like Mazar, the U.S. had nothing. Rumsfeld told Bush that the Generally Tommy Franks who was leading the invasion would come up with something. Eventually the U.N. held a meeting of Afghan leaders that led to Hamid Karzai being selected as the new leader. Part of the problem was that the U.S. went into action shortly after 9/11. There was no real time for any in depth planning for the day after the Taliban were overthrown. The issue however was that even when officials began pushing the need for a political program nothing was done. In the end, the Taliban were deposed, bin Laden escaped and Bush thought this was just one stage in a long war. However, the U.S. was now running Afghanistan with no strategy and is still there to this day. Almost the same thing happened with Iraq, but this time there was time to formulate ideas for what would come after Saddam, but again, nothing happened. That was because both times the cabinet only thought of war and not the aftermath, and Bush never pushed the matter. Bush told Rice and Woodward he didn’t want to micromanage things like what happened in Vietnam, and he trusted his advisers to take care of everything. When they didn’t he didn’t even seem to know because he had delegated matters and was inexperienced. Thus, the U.S. started two wars only thinking getting rid of the government was the goal and got stuck in two countries as a result because there was nothing on an end state, which would allow the Americans to leave. What was surprising was that Woodward didn’t seem to understand what he was writing about either. It wasn’t his style to really comment upon events, but Woodward comes off as naive as Bush about the lack of strategic thinking.

In the Epilogue some of the basics of the run up to the 2003 invasion of Iraq were also discussed. Powell noted that all the meetings within the administration were over when the war would happen, not if it should begin in the first place. Powell questioned the war, and warned Bush in August 2002 that taking on Iraq would come to dominate his entire presidency and that the U.S. would have to run Iraq afterward. Even after that, Powell got stuck in the weeds arguing for going to the United Nations to garner international support for on Iraq, rather than pushing through a real strategy. Woodward asked Bush on what his overall foreign policy was based upon, and he said that he wanted to make the world more peaceful and eliminating Saddam would achieve that. Here again some of the major problems with the Bush White House were brought up. Bush never met with his advisers over whether Iraq should be invaded or not just like how the president made speeches about the war on terror without consulting all his top staff. The U.S. went into Afghanistan with no overall purpose other than to eliminate Al Qaeda and in Iraq it just thought of removing Saddam. The aftermath in both countries was largely ignored leading to years of chaos, resistance, and U.S. occupations.

Woodward’s style is to provide a general history with a recitation of facts backed up with interviews with top officials including the president himself. There are few comments about events, and no analysis. Despite that drawback, he outlined why the Afghan and Iraq Wars went wrong even though he didn’t even realize it at the time. Bush didn’t know about war or foreign policy either, and never asked for a strategy on Afghanistan or Iraq that would lay out how they would remove the regimes and then change the countries so that they were no longer threats. He believed he had assembled the best team around him and that they would take care of this. When they didn’t Bush didn’t even know. Today, Iraq is rightly believed to be one of the worst decisions made by the United States in recent times. Afghanistan isn’t treated as badly because it’s linked with 9/11 and thought to have been necessary. However the conduct of the war there was just as bad as Iraq, and should be placed right along that conflict as a horrible decision making process.