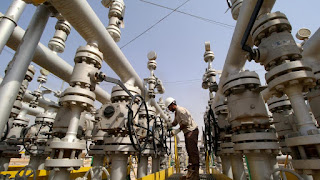 August 2019 was the second month in a row that Iraq’s oil exports grew. That’s due to the country not following OPEC production quotas. At the same time prices dipped down to around $50 per barrel for the first time in seven months. Fears of an economic slowdown and overproduction of petroleum has led to prices to stall throughout the year.

In August, Iraq exported an average of 3.603 million barrels a day. That was up from 3.52 million in June and 3.566 million in July. In August the nation produced a record high 4.88 million barrels a day, up approximately 100,000 barrels a day from July. That happened to be a violation of OPEC quotas meant to limit production to raise prices. Iraq’s quota is set at 4.51 million barrels. The country has not followed previous agreements made by the organization either. Oil Minister Thamir Ghadban has repeatedly said that the government, which gets roughly 90% of its revenue from petroleum needs as much income as possible to pay for rebuilding after the war with the Islamic State. Last year however only 0.5% of its spending was for reconstruction. A more likely reason is that for over a decade now Iraq has said it wants to expand its oil industry and its share of the international energy market to become a world leader in the field.

The problem for Iraq is that the petroleum business ebbs and flows and right now has plateaued and might be in for a decline. Iraqi crude sold for $56.70 per barrel in August. That was down from $61.15 in July. This was the first time the nation’s oil was in the $50 range since January. There was some hope that markets were recovering and there might be a larger than expected growth this year, but overproduction and now fears of a recession coming have meant those hopes have gone unrealized. For the year Iraq has averaged $61.66 per barrel, which is below 2018’s average of $65.61.

Likewise, revenues have been relatively flat this year. In August Iraq made $6.342 billion, down from $6.692 billion in July. For two months, April and May it made over $7 billion per month, but for the year it’s averaged $6.626 billion each month, which was below the $6.953 billion per month mark set in 2018.

With more and more indicators coming out that an economic global slowdown is coming these factors will not change and prices will likely continue a slow decline. Iraq’s cheating on its OPEC quota is not helping with the organization’s desire to shore up prices during this period. This could lead to serious budget problems again. Every time oil markets recover the government boosts spending mostly on government salaries and pensions, and then when prices drop that leads to large deficits and increasingly foreign borrowing. The politicians have shown absolutely no control over spending as they rely upon the public sector in their patronage networks to stay in power. Thus, Iraq will continue to follow this pattern of too much spending and then deficits, borrowing and debt.