Review State of War, The Secret History of the CIA and the Bush Administration 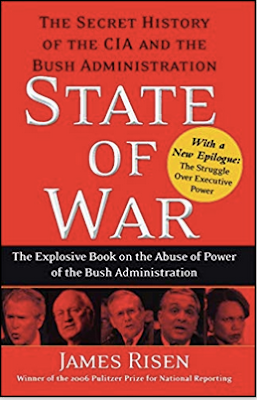 James Risen of the New York Times focused upon the war on terror in State of War, The Secret History of the CIA and the Bush Administration. The book covers the fight against terrorism after 9/11, the Iraq war, and spying on Iran and its nuclear program to name a few. Risen argued that more things went wrong then right for the Bush presidency, and that there were abuses along the way.


The first topic was the war on terror, which Risen believed led to a vast expansion of the power of the state, and major problems. The Bush administration authorized putting terrorism suspects in Guantanamo Bay and torturing them via enhanced interrogations as well as tapping into the phone system and internet to monitor the conversations of Americans. The U.S. also had issues with its allies Pakistan and Saudi Arabia that were uncooperative in taking on Al Qaeda and financed terrorism. Finally, the administration did not believe in nation building in Afghanistan and it lost troops and resources when the Iraq War started in 2003. That meant the U.S. was stuck there in a forever war not being able to lose, but not being able to win either. Risen argued that Guantanamo, enhanced interrogations and monitoring Americans were all abuses of power. In the aftermath of 9/11, the administration was so set on countering another attack and taking a tough stance, that it comprised U.S. ideals about how to act domestically and internationally.

Cracking into Iran’s nuclear program was another dilemma for the CIA. Unfortunately, it might have actually helped Tehran in a misguided intelligence operation. The Agency used a Russian scientist who had defected to the U.S. to sell tainted nuclear plans to the Iranians. The CIA was hoping that they could determine how far the Iranians had gotten with this scheme. The problem was the Russian found the flaws the CIA planted in the plans, and that meant the Iranians could probably do so as well, and once they’d eliminated them Tehran would have workable directions on building a nuclear device. On top of that, a CIA officer screwed up and sent a list of all the U.S. agents in Iran to a double agent, which led to mass arrests. With the failure of the plans and the loss of assets the CIA turned to the Mujahadeen-e Khalq for intelligence on Iran, which was not only a questionable source but listed as a terrorist organization in America. Risen painted this as an unmitigated failure, and another part of his thesis that the CIA has often failed in its operations. His first two examples read like a comedy of errors with the U.S. perhaps giving Iran plans for a bomb and exposing all of their agents. It raised serious questions about the management of the agency that it could make such mistakes.

The heart of State of War deals with the invasion of Iraq, but its coverage was up and down. Like too many U.S. books on the war, it focuses upon the neoconservatives as the cause for the conflict. It argues that they were empowered by Secretary of Defense Donald Rumsfeld and Vice President Dick Cheney. Then Risen got caught up in the blame game between the CIA and White House over the pre-war Iraq intelligence. He obviously relied on a lot of Agency sources who told him that the CIA was against the war with only a small minority promoting it. They also said that the Agency never believed in an Iraq-Al Qaeda connection or the defectors provided by the Iraqi National Congress (INC) that were promoted by the neoconservatives. Compare that however to an entire chapter on a CIA program to contact Iraqi-Americans to talk to their relatives back in Iraq that were working on WMD. All of them reported that Iraq no longer had WMD programs, but the Agency didn’t believe them and the reports were never widely circulated. There are all kinds of contradictions with this. First, the neoconservatives in the administration were all deputies like Paul Wolfowitz and Douglas Feith at the Pentagon. They did not call the shots. Ultimately, Bush decided on the war and there is nothing on his motivation. Second, the CIA used INC sources for dozens of reports on Iraqi WMD. The claim that it didn’t only happened after the 2003 invasion when the CIA was trying to push everything on the administration. Third, while the CIA did question Iraq-Al Qaeda ties, it completely believed that Iraq had WMD and that those programs were growing hence its rejection of the findings of the Iraqi-American campaign. Again, Risen used too many sources from the CIA and only got their side of the story. That is a major fault with the book, which happened to several other authors who published books around this time.

The section on the occupation of Iraq also had its issues. The good part was that the CIA was one of the first to warn that an insurgency was emerging and then growing in Iraq in 2003. That was rejected by the White House because Bush only wanted to hear good news. Risen rightly places the blame for the postwar chaos on the failure of the U.S. to make a comprehensive plan for Iraq. Then, he fell for the Agency sources again who blamed the Pentagon for wanting to put Ahmed Chalabi in power rather than come up with an actual strategy for Iraq. First, while some of the neoconservatives did back Chalabi that was never an actual policy. The lack of a strategy for how to create a post-Saddam Iraq was a much deeper flaw throughout the White House and military that didn’t understand the war they were getting into. They believed regime change was an end in itself rather than just a step towards a new Iraq. On the other hand, the CIA did quickly realize that things were not going right, but President Bush didn’t want to hear it. He believed in his decision to invade and it took him four years to change his mind. This was a fault of the president’s stubbornness more than anything else. Risen’s problem was that he was looking more at the CIA-White House dispute in this matter rather than exploring the man in charge of everything the president.

In the end State of War is a very inconsistent read. The sections on the abuses that came out of the war on terror are convincing. The handling of Iran was shocking for its incompetence. The coverage of Iraq however was more up than down. That was largely the result of Risen listening to too many from the CIA who were trying to avoid blame for the Iraq invasion. He repeated too many of their claims which were often wrong and misleading. Overall, this book was a reflection of its time. Many American writers around 2006 were trying to decide if Iraq’s policy after 9/11 was going in the right direction. The abuse of terror suspects, the spying upon Americans and the Iraq War all seemed to point in the negative. The gapping hole in the narrative is the president’s role. There was nothing on Bush’s thinking that led to the Iraq invasion for instance. There’s no way to evaluate his responsibility for what transpired as a result. This problem was quite common for many other writers at this time as well.