Review Squandered Victory, The American Occupation And the Bungled Effort to Bring Democracy to Iraq 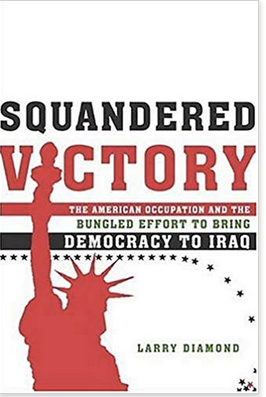 Larry Diamond was a political science professor at Stanford University specializing in democracy who was called up by his friend from that school National Security Adviser Condoleezza Rice to help the Coalition Provisional Authority (CPA) draft Iraq’s transitional constitution. Diamond had opposed the 2003 invasion, but thought it worthwhile to try to help foster democracy in the country. He came away deeply troubled by his experience which he wrote about in Squandered Victory, The American Occupation and the Bungled Effort to Bring Democracy to Iraq. He believed the United States constantly made mistakes both before and after the invasion to the point that he called it “criminal negligence.”


Diamond arrived in Iraq in January 2004 and immediately ran into Paul Bremer who talked about creating a democracy, but constantly denied it to Iraqis. Bremer had a multi-year plan for Iraq, but that was shot down by the White House in November 2003 as taking too long. The new plan called for drafting an interim constitution and a transitional government that would lead to the return of sovereignty in 2004. Ayatollah Ali al-Sistani constantly complained about Bremer’s ideas and issued a fatwa against them because the CPA head refused to hold elections for drafting the constitution and creating a government. Bremer even vetoed district and provincial elections which Iraqis and the U.S. military were trying to organize. Diamond was originally impressed by Bremer’s demeanor and leadership, but eventually came to think of him as a major detriment. Bremer was a control freak who micromanaged everything. He was in a bubble inside the CPA, and had no idea what Iraqis thought of his organization or the Americans in general, and didn’t seem to care. That meant he not only rejected Sistani and Iraqis’ call for elections, but even his own officials because he believed his plan was the only way to move forward.

The writing of the interim constitution, the Transitional Administrative Law (TAL) was an example of the CPA’s approach to Iraq. An Iraqi adviser to the Iraqi Governing Council came up with the draft of the TAL. An Iraqi-American lawyer, an Iraqi exile lawyer, Diamond and two others from the CPA’s Governance Council drew up the document. It tried to include liberal democratic practices from the west like due process, judicial review, and federalism. The Kurdistan Democratic Party and Patriotic Union of Kurdistan on the Governing Council were then able to get a number of concessions such as federalism based upon the Kurdistan Regional Government rather than provinces, and allowing three provinces to veto a new constitution that was to be drafted after sovereignty was returned. That greatly angered Sistani, the religious Shiite parties on the Governing Council and plenty of regular Iraqis as well. Diamond worked to promote the TAL to the public and was constantly barraged with complaints the main one being that no Iraqis were included in the writing of the document, which was offensive to many. As usual, Bremer rejected all the criticism and refused to make any more changes. This was the second major problem Diamond found with the CPA. The organization, just like Bremer never included Iraqis outside of the Governing Council. That led to widespread opposition. A group close to Sistani for example, issued a short rebuttal to the TAL which was widely circulated in the country calling it an occupier’s law. Again, the document that was supposed to be the basis for Iraq’s permanent constitution and lead to a liberal democratic system was made by foreigners showing the hubris of the entire effort.

A third failure was the creation of the interim government. A State Department official drew up a plan to have conferences across Iraq that would pick the new authority. It wouldn’t be elections, but it would include Iraqis making the choices. That was cancelled by the White House and the Iraqi Governing Council that wanted to control the process. Those two completely undermined the efforts of the United Nation’s representative Lakhdar Brahimi to create a non-political and technocratic government until one was elected. Instead, the two made a series of backroom deals to pick the interim prime minister Iyad Allawi and most of the ministers. The majority of the parties and individuals on the Governing Council shared the view of the CPA and White House, that the Iraqi public and popular sovereignty were not as important as holding onto power. The U.S. was again motivated by dictating terms rather than promoting democracy as well. Diamond was greatly disappointed by these constant examples of political decisions that hurt the overall effort to build a new Iraq. That idea appeared more lip service than a reality.

Lastly, Diamond argued that the CPA and Washington were feckless in the face of the threat of militias undermining Iraq’s new political system and the future of the country. The biggest manifestation of this was Moqtada al-Sadr’s Mahdi Army, which not only attacked Coalition forces, but enforced Islamic law, arrested, detained and tortured people under its own courts. There were other armed groups as well such as the Supreme Council of the Islamic Revolution in Iraq’s Badr Brigade, and the peshmerga of the two Kurdish parties. The CPA drafted a Transition and Reintegration plan to disarm, demobilize, and integrate these groups, but it wasn’t signed by Bremer until the last month of the Authority’s existence, and never implemented by the interim government. Diamond thought that Sadr either needed to be co-opted by being included in the Governing Council or crushed by the U.S. military. The Americans did neither. Even when Sadr launched an uprising in April 2004, the U.S. backed a political deal that kept his militia intact. Diamond’s experience studying developing countries provided plenty of examples of weak states not having a monopoly on the use of force due to militias, which weakened new democracies. Iraq is still dealing with this issue today with the proliferation of Hashd brigades that are only nominally under the government’s control.

Diamond’s final thought was the Bush administration squandered its opportunity to transform Iraq after the 2003 invasion. The original sin as he termed it was that the U.S. had no plan for Iraq. That led to mistakes before the war such as going in with a small invasion force that wasn’t big enough to secure the country and continued with the Coalition Provisional Authority. This was why Diamond said this was an example of criminal negligence and one of the biggest failures in U.S. history. Squandered Victory was published in 2005, and its assessment rang true. Most current histories of the Iraq War believe that it was one of the greatest mistakes America made. Diamond’s work is important because it documents how Iraqis were constantly ignored. How was the public to believe in the U.S. endeavor for democracy when they were consistently denied not only the vote, but even a say?