Review Plan of Attack: The Definitive Account Of The Decision To Invade Iraq 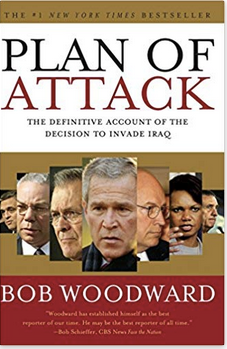 Plan of Attack: The Definitive Account Of the Decision To Invade Iraq was the second of four books by Washington Post reporter Bob Woodward on the Bush administration’s wars in Afghanistan and Iraq. Like Woodward’s other work he provides an insider look at the White House and its decision making based upon interviews with top sources such as the president himself. Woodward provides few comments and no analysis. Plan of Attack is important for several reasons. First, it breaks down the characteristics of the major players in the government. Second, Woodward details the main decisions that led up to the 2003 invasion of Iraq. Finally, he highlights the fact that President Bush and his top advisers did not understand the war they were getting into. Almost their entire focus was upon deposing Saddam Hussein, when Bush said his ultimate goal was to transform Iraq into a democracy. The lack of a strategy to achieve that aim was why Iraq fell into chaos immediately after the 2003 invasion and has been plagued by problems ever since then.


Woodward was the first to present many of the important events that led up to the Iraq war. The most significant was on November 21, 2001 when President Bush asked Defense Secretary Donald Rumsfeld to revise the war plans for Iraq and to keep it a secret. Bush said he knew there would be a negative reaction if word got out that the U.S. was thinking about Iraq while 9/11 was still fresh in the memories of the public and the Afghan conflict was still on going. Bush told Woodward that this was the first step to a new war. His motivation? His gut feeling that Iraq was connected to the September terrorist attacks, despite finding no evidence of that. The U.S. would have a dual track policy where it would secretly work on the invasion plans, while publicly claiming that it was trying peaceful measures such as going to the United Nations and asking for the return of weapons inspectors to end the threat posed by Saddam Hussein. The ultimate goal was always regime change however. There has been a heavy debate about just when the president decided that he would get rid of Saddam. In September he’d told his staff more than once that Iraq would be next on the war on terror due to his conviction it was involved in 9/11, November was when planning actually began, and as he related to Woodward he knew that was the start of everything that followed.

Another important element of Plan of Attack was that it went through the major players and how they shaped the planning process. The two most important were the president and Defense Secretary Rumsfeld. Bush was a self-assured chief executive who didn’t believe in micromanaging his staff, delegated tasks and wasn’t hands on with Iraq. Part of that meant that he never asked very deep or probing questions during briefings. He also felt so confident in his decision to go to war that he never went to his staff about the matter because he believed they were with him. Even after the invasion and no WMD or ties to Al Qaeda were discovered Bush still thought he had done the right thing. Donald Rumsfeld was portrayed as a bully who wanted total control and power over everything. He made endless demands and questions as a way to assert his authority. That undermined planning for the invasion making the military go through all kinds of meaningless tasks, and it ended up with a smaller force than originally planned for that hurt the occupation. He also rarely gave his own opinion on matters and even told Woodward at the end of the book that he never pushed for the war even though he was one of its main advocates. These two personalities would have a hugely negative impact upon Iraq. Bush’s conviction meant he decided Iraq was a threat on 9/11, and would not budge on his determination to remove Saddam. The president never brought up big issues, like should the U.S. invade in the first place, and there were never any demands upon Rumsfeld or anyone else to figure out what to do with Iraq after Saddam. Not only that, but when things went immediately wrong after the invasion he didn’t accept it because he believed he was in the right. He also had little experience in foreign policy or war, and left things to Rumsfeld who worked with General Tommy Franks to come up with a war plan that lacked a strategy to achieve Bush’s goals because they were uninterested in the postwar situation. Neither was a big thinker, and Rumsfeld spent his energies incessantly needling Franks about every aspect of the invasion, while missing the bigger picture.

That brings up Woodward’s other main revelation the utter lack of a wholistic plan for Iraq. Plan of Attack has 443 pages of text, only roughly 16 of which were on postwar duties. That was actually very symbolic of how little time the administration spent on this most pressing topic. In August 2002 for example, the White House issued “Iraq: Goals Objectives and Strategy,” which said the point of the war was to transform Iraqi society and create a democracy, but with nothing on how to achieve them. That same month, General Franks briefed Bush and not only admitted there was no political scheme for the day after the invasion, but that he wanted to withdraw U.S. forces as quickly as possible. Also, in August Secretary of State Colin Powell had dinner with the president and warned that if America invaded it would become the occupying power with all that implied. Powell then failed to push for a strategy either. Bush himself told Woodward that the U.S. needed a strong understanding of Iraq and how to rebuild it, but that was never done. When the war started Bush said that there was a lot of second guessing going on like what would happen after the war, but he said winning was all that mattered. Woodward didn’t know it but he was documenting how the White House did not understand this conflict. Bush, his cabinet, and General Franks only thought in terms of removing Saddam as if that was the end game. The problem was the real goal was to change Iraq, and the administration was utterly devoid of ideas about how to achieve that. The president never seemed to understand this all the way to the end of his term. As stated earlier, his personality actually led him to believe that everything was succeeding.

What was really ironic about Plan of Attack was that Woodward didn’t seem to comprehend all that he was reporting. Yes, he covered the powerful figures that shaped the Iraq war, and recorded the important dates along with some memorable events, but the bigger picture he missed. He rarely made any personal remarks, but at one point he called General Frank’s initially planning “ingenious.” He spent nearly 400 pages on all the different moves that led up to the 2003 invasion, but just like the president failed to realize that to create a new Iraq there had to be a strategy and postwar planning, but that never really happened. It’s not just that the entire argument for the Iraq War proved false, it was that the White House didn’t know what it was doing that made this such a tragedy and one of the worst foreign policy decisions in recent American history.