Two contradictory trends occurred in Iraq during the month of August. For the first time in three months security incidents went up in the country. At the same time, the Islamic State largely withdrew from most of the country and became solely focused upon Diyala province. There were also continued reports that people were fleeing towns and being left unprotected from the intimidation of the militants. This supports recent papers by the United States and United Nations that IS is de-emphasizing operations in Iraq right now to preserve and rebuild its core.


There were a total of 104 security incidents recorded during August. One of those was an IED set off by a pro-Iran Hashd group targeting a security unit working for British Petroleum at the Rumaila oil field in Basra. Still, the 103 incidents likely committed by the Islamic State were the highest since 135 in May, and marked the first increase in attacks since that month as well. In the preceding two months incidents had gone down from 93 in June to 82 in July. 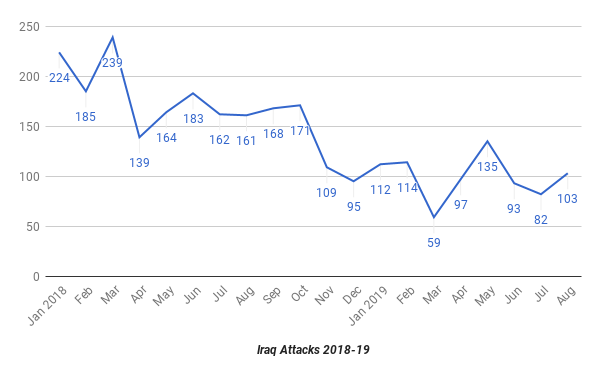 There were a high number of casualties as well. There were 103 deaths consisting of 1 U.S. soldier, 24 Iraqi Security Forces (ISF), 37 Hashd al-Shaabi and 41 civilians. 10 bodies of Yazidis killed by IS were found in the Sinjar district of western Ninewa. That left 93 violent fatalities during the month. Another 141 were wounded made up of 12 Hashd, 48 ISF, and 81 civilians. Diyala had the most casualties with 21 killed and 46 wounded as it continues to be the most violent province in the country.

Despite the increase in overall security incidents during the month, IS operations have been in decline across central Iraq. In Anbar there were only 4 incidents during the month the lowest ever recorded since 2003. Just a few months ago there were 27 in February, 16 in April, and 13 in June. Even with those spikes it has been apparent the province is no longer considered a main front for the insurgents. Rather it is using Anbar to move men and material into the nation from Syria. Incidents in Kirkuk have been flat for the last three months. After 35 in May there were 18 in June, 15 in July and 19 in August. Attacks there have followed that pattern since the summer of 2018 with a jump and then a few months with little activity, and then another jump. The spikes however have been happening less frequently. Likewise, in Ninewa, there were 10 incidents in June, 6 in Jul and 9 in August, while in Salahaddin incidents went from 9 in June to 8 in July and 7 in August. The militants used to be active in the western Anbar deserts, in southern Kirkuk, in the western border of Ninewa and south of Mosul, and northern and eastern Salahaddin. Now there are only sporadic attacks in all those areas. Salahaddin almost went three weeks straight without a single attack. During the insurgents last rebuilding after the Surge it was still setting off IEDs every day, taking shots at the security forces and would often carry out mass casualty bombings. That has all disappeared this time around. The U.N. and U.S. reported that IS is focusing its attacks in Syria, while looking to preserve its core leadership and fighters in Iraq. Still, this is a remarkable change in the country’s security situation. 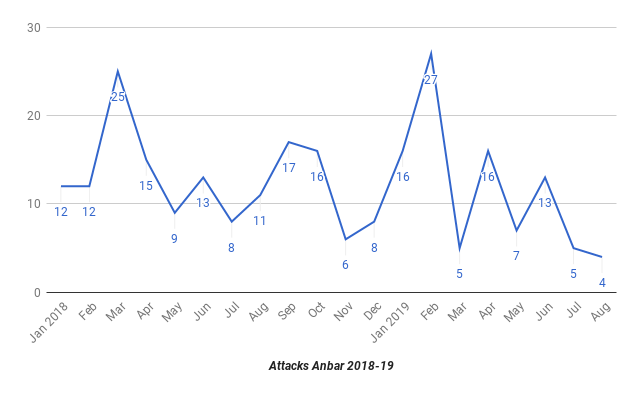 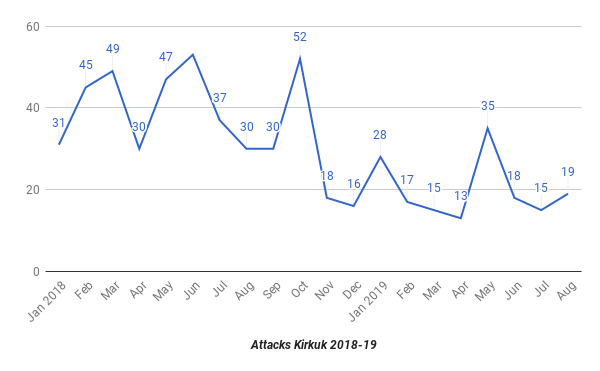 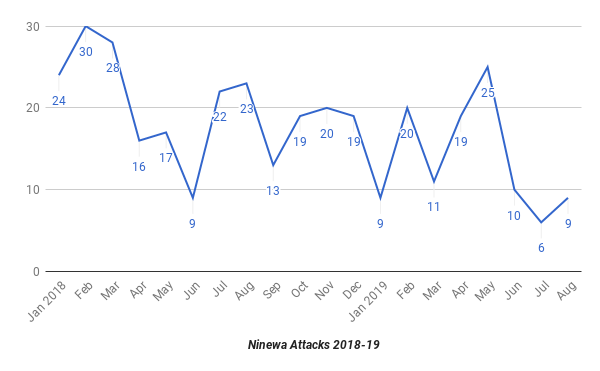 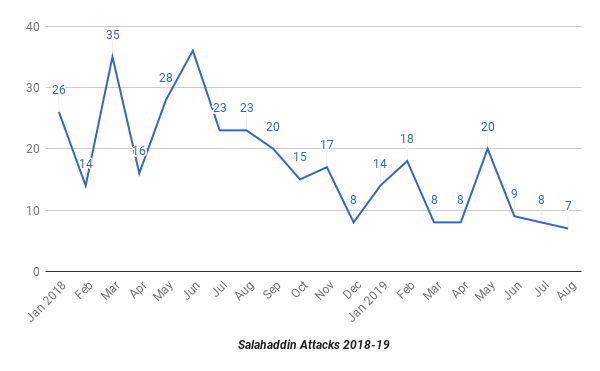 There are a few exceptions to that trend. Babil saw 8 attacks in August. That was the most since June 2018. Not only that, but IS carried out a mass casualty bombing with a motorcycle bomb hitting a market in the northern section of the province. The insurgents have also been attempting to infiltrate into Baghdad, but at a very slow pace. There were just 4 incidents in that governorate in March, then 10 in April and May respectively, 13 in June, 15 in July, and then 14 in August. Almost all of these attacks occur in the periphery of the province in the north and south, but the effort is on-going, and is proving difficult. In both cases, the Islamic State appears to be probing the defenses of the two governorates and looking for opportunities. Babil is a much easier target because IS has access to it from Anbar. Jurf al-Sakhr is a favorite district because there are no civilians there and has been turned into a Hashd base providing lots of targets. 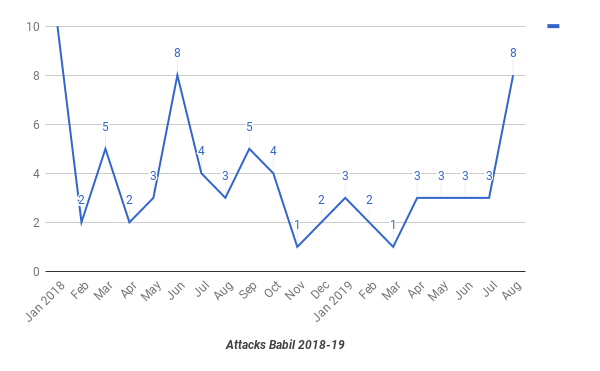 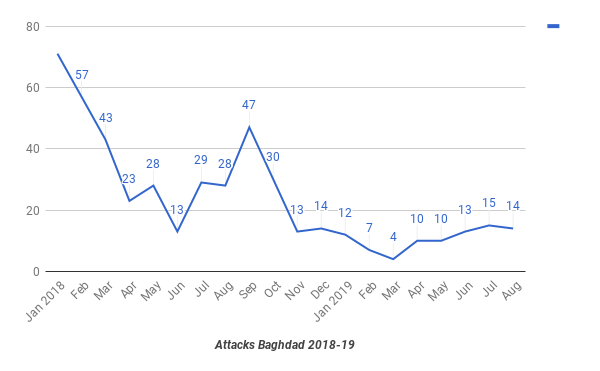 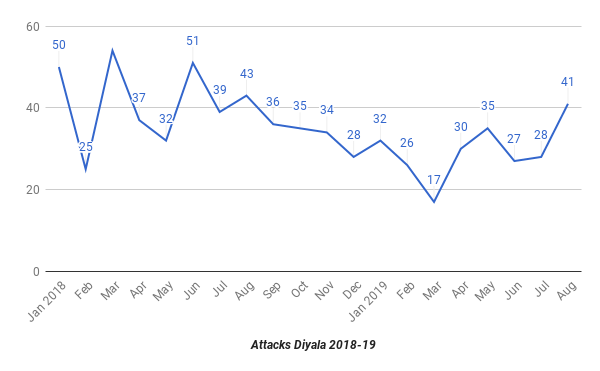 Diyala however, has become the bastion of the Islamic State. Attacks saw a large jump from 27 in June to 28 in July and then 41 in August. That was the most attacks since 43 in August 2018. IS never seized any territory there in 2014, and immediately transitioned to an insurgency. Even here there has been a transition. Earlier on the militants were active in every rural area of the province. Now around half of the attacks are in the Jalawla-Khanaqin districts in the northeast and most of the rest are in the north or center. There are few attacks in the south or west anymore. Here you see both sides of the group’s rebuilding. On the one hand it has forced people out of several rural areas allowing it to set up new bases. On the other hand, it has constantly hit local administrators and the security forces. In the middle of the month for instance, there was a large attack upon an army camp. The result is that Diyala is consistently the most violence area of the country. A major issue for the government is that there are too many security units in the province and a lack of coordination between them. In the Jalawa-Khanaqin districts for instance, the Hashd have moved in after the areas were taken from the Kurds after the 2017 independence referendum. Those brigades do not have enough troops there and there are gaps between them and the Peshmerga. The rest of the province is supposed to be under control of the Badr organization that also runs the local army units, but other Hashd units are also there that do not follow Badr. This hodgepodge of units has provided ample space for IS to operate in.

A third main goal of IS is to set up new camps to rebuild its cadres. That includes killing local officials, attacking towns, collecting taxes, and driving out residents. This appears to be going well for the group. There are constant reports of people fleeing after IS attacks. In August there were stories that 20 villages in Diyala’s Khanaqin had been abandoned, that families were fleeing Diyala’s Maya Basin, Kirkuk’s Daquq district, and the Shura district of Ninewa, that the security forces were not protecting people in Diyala’s Kanaan from the insurgents, and that IS was regrouping in the Makhmour area of Ninewa. Since IS lost so many fighters in the war, it is now trying to get new recruits. That requires secure areas to train them. That’s what these stories point out, where the insurgents are finding places to create bases. These are just as important as the individual attacks, because it lays out where the militants may emerge in the future.

Al Maalomah, “Daini calls for urgent measures to stop the displacement of the villages in the heart of Imam Weis in Diyala,” 8/13/19

Al Mirbad, “Explosion of a bomb on a security vehicle charged with protecting the BP company west of Basra,” 8/7/19