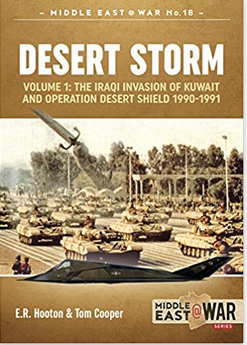 Desert Storm, Volume 1 had great potential, but got lost in a breakdown of all the military forces involved in the aftermath of the 1990 invasion of Kuwait. The book starts with some history on the creation of Kuwait, Iraq-Kuwait relations and then the militaries of Iraq, Kuwait, and Saudi Arabia. The invasion of Kuwait is next, and then all the forces and logistics involved in Operation Desert Shield. It’s the later that really brings down the book as it takes up nearly a third of the text and begins to read like a list of all the different pieces of equipment that were deployed.


The book starts off well with some background on Kuwait and its relations with Iraq, which were always up and down. Kuwait was settled by people moving north from the Arabian peninsula and then people leaving Basra towards the Persian Gulf. Its rulers’ relationship with the British who were looking for ports along the route to India eventually allowed the area to become independent. Iraq at first tried to have good relations with the new country, but its ties to London became an issue leading General Abdul Qasim to declare Kuwait was part of Iraq in 1961. Then in the 1970s President Ahmed Bakr laid claim to the Warbah and Bubiyan Islands that would have given Iraq greater access to the Gulf. When the Iran-Iraq War started Kuwait backed Saddam loaning him billions of dollars. That debt, Iraq’s argument’s with Kuwait over oil prices, and Saddam’s desire to use his military power in the region would lead to the 1990 invasion. Authors Hooton and Cooper provide some basic history here. It’s good that they started with the origins of Kuwait to show that ties between the two had ebbed and flowed over the years.

The section on the invasion of Kuwait is interesting. Saddam had the Republican Guard secretly make plans for the assault and completely cut out the regular army, navy and air force. At the time, Iraq was the strongest Arab military after its experience in the Iran-Iraq War. It learned how to plan and execute combined arms operations at the corps level. After the war however, Saddam asserted his control the armed forces to prevent coups and potential rivals. He placed an inexperienced cousin in charge of the air force for example. Despite Iraq’s overwhelming force the invasion did not go as well as planned. The air force didn’t prepare for potential bad weather and was grounded by fog for the start of the day. That meant the Iraqi special forces flown into Kuwait City and other targets on helicopters had no air cover and lost a large number of aircraft to the Kuwaitis. The armored columns also got caught in traffic along the highways as people attempted to flee towards Saudi Arabia. Finally, the army didn’t have enough fuel to get all the way to southern Kuwait and had to use civilian gas stations at times. While the Kuwaiti military wasn’t that good it did put up a fight and its air force scored many victories before they were forced to withdraw to Saudi Arabia. That effort allowed the Sabah royal family to escape as well. Hooton and Cooper were able to interview some Iraqi generals who took part in the invasion, which gave them some good insights into the Iraqi planning that went into the operation. The narrative of the fighting was also interesting and gave a blow by blow portrayal of the conflict.

The last third of the book that focuses upon Operation Desert Shield is where Desert Storm, Volume 1 fell apart. The problem was that it went through every one of the militaries that deployed to protect Saudi Arabia in excruciating detail. All the different planes, all the different tanks, all the ships that were used, etc. are all covered. It’s simply too much. The only really interesting part is that there was no evidence that Saddam intended to invade Saudi Arabia. On the other hand, the Saudis and General Norman Schwarzkopf were convinced Iraq was coming. Later, some of Saddam’s military chiefs tried to warn him that any confrontation with the U.S. led Coalition would result in a disaster, but he wouldn’t listen. He didn’t want to look weak by withdrawing from Kuwait under international pressure, because he wanted to confront Israel next, and be seen as the next great Arab leader. Those little nuggets are buried in a sea of text on military equipment.

The best part of Desert Storm, Volume 1 is its account of the preparation and invasion of Kuwait. The opening histories are important, but the rest is too monotonous. It is a military history, but the focus gets lost on all the armored vehicles, planes, and ships that were involved.