Review Shatter the Nations, ISIS and the War for the Caliphate 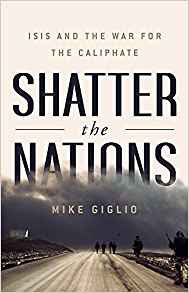 Mike Giglio worked for Newsweek and the Daily Beast covering the Arab Spring in Egypt, the Syrian civil war, and finally the Battle for Mosul. He put that experience into Shatter the Nations, ISIS and the War for the Caliphate. It reads like short vignettes of Giglio’s time in Egypt, Turkey, Syria and Iraq. That’s its major problem however as these individual stories, while enjoyable to read, don’t add up to a unified story.


The first half of Shatter the Nations highlights the problems with the book as Giglio bounces from the overthrow of Hosni Mubarak in Egypt to the start of the Syrian and Iraq Wars and back. At one moment he’s in the second half of the Battle for Mosul in 2014 when the author was embedded with the Iraqi Counter Terror Service. Then he switches to 2011 when he talked with an Egyptian activist during the start of the Arab Spring. Then there’s Leo, a Syrian-American who grew up in New Jersey, got deported back to Syria, where he found himself in the middle of the civil war before he ended up a refugee in Turkey. These all read like assignments Giglio had that he turned from notes or articles into longer essays. While they touch on the unrest that was sweeping parts of the Middle East at the time that is only real connection between them. The inclusion of Egypt for example, doesn’t seem like it belongs in a book whose subtitle is ISIS and the War for the Caliphate. There is also no real analysis and only a little reflection, which means the book doesn’t provide a larger understanding of the events the author is writing about. That gives the beginning a haphazard feel.

That doesn’t mean the chapters aren’t interesting. There’s one about the antiques trade that sprung up during the Syrian War. That involved Syrians who simply wanted to make money out of their desperate situation to the Islamic State (IS) who had professional squads with heavy equipment to excavate sites to the middlemen who shopped the pieces to mostly Europeans and Americans who were happy to buy rarities despite their questionable provenance. There’s another piece on how the Obama administration claimed that it deployed precision air strikes against the Islamic State, which were supposed to avoid civilian casualties. Giglio looked for victims and fond many such as a house being hit where five sisters were killed, led to a pregnant women having a miscarriage, and three neighbors dying as well. The author collected all the details he could on the incident and sent them to the U.S. military who denied there were any civilian deaths. Finally, Giglio talked with a growing number of IS defectors who were springing up in southern Turkey. One man had been a smuggler for IS and left the group. His young son however had been indoctrinated by the militants and said he wanted to kill infidels. His father asked if he meant he wanted IS to eliminate them. The youth replied that he wanted to kill them himself. The wars in Syria and Iraq created many such stories from the tragic to the inspiring. The book does a good job capturing some of them. Again though, it skips from topic to topic and doesn’t make an effort to tie them together.

The second half of the book when Giglio focuses upon the Mosul Battle is much better. He spent time with both the Counter Terror Service (CTS) and the Peshmerga. He did a great job describing the various soldiers he met. For example, one CTS veteran explained how he was one of the first recruits to the service during the U.S. occupation, but by 2014 hardly any of his peers were still alive as his unit was used as the tip of the spear in the war against IS. One CTS officer also told Giglio how he and his men were all in on the conflict. Unlike the Americans who volunteer to join the armed forces and get sent to foreign countries and then eventually leave, the Iraqis were fighting in their country in their own backyard. They could not avoid the conflict. They had to confront the Islamic State otherwise it would continue to expand. There are more harrowing stories as the battle progressed such as how the author barely escaped a car bomb. Since the whole second part of the book is about this battle there is an actual theme and coherence to the reading. The chapters are also far more consistent, and the CTS members are really portrayed as heroes who sacrificed everything to defeat the Islamic State.

Ultimately Shatter the Nations starts off feeling scattered, and then becomes a war journal on Mosul. There are enough interesting stories that present a number of individuals who were affected by the Syrian and Iraq wars to keep the reader going. In the end though, it’s really about Giglio’s personal experiences, and doesn’t really provide much of an insight into the conflicts.