Revised Review Iraq and the Politics of Oil, An Insider’s Perspective 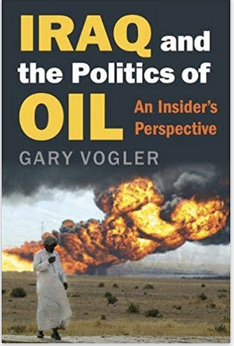 Iraq and the Politics of Oil, An Insider’s Perspective is a classic tale of experts being stifled from achieving their goals by the bureaucracy and political appointees. Gary Vogler spent 21 years working for Exxon-Mobile. In 2002 he was asked by the Pentagon to join a planning group for the Iraq invasion. That led to years working in that country. From 2003-04 he was with for the Pentagon, then the Office of Reconstruction and Humanitarian Assistance (ORHA), and finally the Coalition Provisional Authority (CPA). He would return from 2006-11 as a contractor for Wheeler Energy Ltd. During that time he found that there were committed Americans and Iraqis that wanted to develop Iraq’s oil industry and rebuild the country, but they ran into all kinds of problems due to Washington and Baghdad.


There are three broad sections of Vogler’s book starting with the ORHA-CPA period when the goal was to get Iraq’s oil industry up and running again after the invasion. One of the first things Vogler’s energy group did was to meet with Iraqis from the Oil Ministry, establish its leadership, and get the country’s petroleum flowing again. Here Vogler ran into the first of many roadblocks. The Oil Ministry wanted to re-establish its payroll and the CPA team approved it. The CPA budget director however wanted to reform all the Iraqi ministries pay systems. The director then froze funding for the CPA oil group because he objected to its contract with Kellogg-Brown-Root (KBR) for service projects. The director was warned that these decisions could lead to unrest, strikes, and a reduction of exports, but he didn’t care because he had his own agenda. There were problems from the Iraqis as well. When the Iraqi Governing Council got to name ministers Ibrahim Bahr al-Uloom was appointed Oil Ministry with the backing of Ahmed Chalabi even though he knew nothing about the business. This was part of a political deal between the two where Chalabi was able to broker deals and pick ministry officials. That included having Iraq sell to the oil trading company Glencore against the wishes of the ministry staff. Glencore had secretly sold Iranian oil to Israel, and Vogler believed this was part of Chalabi’s plan to try to get Iraq to export to that country as well, something he’d promised Jewish lobbyists and Israeli politicians to win favor for his Iraqi National Congress. A Pentagon official also called Vogler and Iraq’s Oil Ministry to see if they could get oil going to Israel. These types of stories are repeated again and again in Iraq and the Politics of Oil. The Oil Ministry was one of the early successes in Iraq because the top officials quickly went back to work, while the other ministries had to start almost from scratch. Then the CPA budget director and Chalabi tried to impose their own plans. There was no way the Iraqi government was going to authorize oil sales to Israel, but Chalabi and some in the Pentagon tried it anyway. That’s what makes this book so interesting because Vogler was involved in all these processes rather than hearing it second hand from someone else. The stories portray a constant struggle by experts to perform their tasks and follow through with their projects.

Vogler returned to these themes again and again. During the Surge for example, the U.S. military working with the Baiji refinery director Dr. Obaidi took back the facility from the Islamic State. General Petraeus was able to get the Oil Ministry to okay the building of new export facilities in Basra. Finally, in 2009 Iraq held a series of auctions which opened up some of its largest oil and gas fields to international oil companies (IOCs). For each one of those triumphs there were setbacks. Dr. Obaidi tried to tackle corruption at Baiji and got an arrest warrant issued for him as a result, and then left Iraq all together after the U.S. withdrawal because of the enemies he made in the insurgency and Iraqi government. Oil Minister Shahristani had no experience in the industry, and decided to break up the export facilities project into two parts that led to large delays which cost Iraq billions of dollars in potential profits. After the IOCs were brought in the government bureaucracy couldn’t handle the number of visas necessary for the influx of foreign workers, and couldn’t consistently pay the companies. The Oil Ministry’s strategy also got out of whack and the petroleum production was growing much faster than its export capacity so it purposely slowed tracked deals on its oil fields. These are likely very common experiences in the interface between government and the private sector. There are always politicians and bureaucrats that stand in the way of the best laid plans. Despite that, Vogler met many dedicated Iraqis and Americans who wanted to improve the country. That’s what motivated him to spend so much time in Iraq and write this very interesting book.