Review Weapons of Mass Deception: The Uses of Propaganda in Bush’s War on Iraq 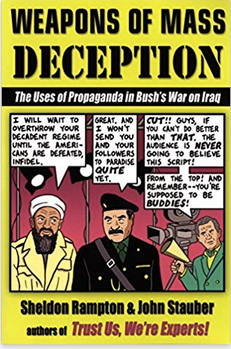 Weapons of Mass Deception by Sheldon Rampton and John Stauber is a disjointed book. It purports to be about the use of propaganda by the Bush administration during the 2003 invasion of Iraq. However their writing style is akin to a stream of consciousness meaning they go from topic to topic, some of which has more to do with 9/11, the war on terror, and a critique of American politics than Iraq. At its best the book has some interesting sections on how the invasion was covered, but the constant weaving on and off topic distracts from the authors’ argument.


The good parts of Weapons of Mass Destruction focus upon media critiques. It starts with how the taking down of Saddam’s statue in Baghdad’s Firdos Square was covered in April 2003. This event was embraced by the U.S. news as it showed Iraqis welcoming Americans as liberators just as the Bush administration claimed. In fact, only around 200 Iraqis were present due to a military cordon around the square and it didn’t capture the mood of Iraqis which was much more mixed about the invasion. There’s also a very short yet thorough rundown of how the Bush administration convinced a majority of the U.S. public that Iraq was a threat using faulty claims about weapons of mass destruction and ties to Al Qaeda. Another good part is how the authors compared how U.S. new outlets largely turned in sympathetic to cheerleading stories about the invasion to the Arab world where the deaths of Iraqis was emphasized. A Los Angeles Times reporter in Saudi Arabia was quoted as saying that the war coverage in the Arb world would inspire an army of young men to travel to Iraq to fight the Americans. He proved to be prophetic. These represent the strength of Rampton and Stauber’s work. They do a very good job breaking down a specific event in a very short amount of time. They provide a brief summary of what Americans saw and then an alternative view of what happened. The U.S. heard about Iraq’s WMD, while the world heard U.N. inspectors debunk most of those claims. NBC, Fox, etc. showed U.S. planes and tanks charging across Iraq, the Arab world saw dead Iraqis. The result was that the American public was not only largely ignorant of how its actions were being perceived, but didn’t get a thorough portrayal of the causes and impact of the war.

Unfortunately this is lost amongst a number of tangents and chapters not having to do with Iraq. For instance, the authors talk about how the Bush White House promoted the false story that 9/11 hijacker Mohammed Atta met with an Iraqi intelligence officer before the terrorist attack. That then segues into how Saudis were linked to the 9/11 attack and launched a PR campaign in the U.S. to avoid blame. There’s a chapter on government use of double speak, saying one thing and meaning another, which almost exclusively focuses upon 9/11 and how it affected marketing and politics, especially conservative rhetoric in America. This is the main problem with Weapons of Mass Deception, Rampton and Stauber can’t stay on topic. Almost half the book focuses upon the impact of the terrorist attacks upon the World Trade Center and the Pentagon. Some of what they talk about is interesting, but shouldn’t be in a book that is supposed to be about Iraq. The meandering style of writing is a distraction.

Overall, while Rampton and Stauber make some good points about how the Iraq invasion was portrayed in the U.S., it gets lost as the authors get sidetracked over and over again. If they had better editing, this could have been a nice book critiquing media coverage and the politics of the war. It seems like the authors however got caught up in the moment between 9/11 and the overthrow of Saddam Hussein and wanted to throw in a bunch of ideas about that time period in America.