When protests started in Iraq in October 2019 the Islamic State largely stopped its operations as it has done every year when demonstrations occur. IS has felt that the demonstrations present a challenge to the government, and it did not want to distract from that. However, as this year’s unrest has been sustained the Islamists finally decided to return to the field. The result was that security incidents in December were just about what they were before the protests began.


In December 2019 there were a total of 120 security incidents reported in the media. Six of those were likely by pro-Iran groups trying to provoke the United States. One was in Anbar where rockets were fired at the Ain Al-Assad base, while three others were in Baghdad where rockets were discovered aimed at the Green Zone, and additional missiles were fired at the Baghdad International and Military Airports. In the latter attack, six members of the Counter Terror Service were wounded. In Salahaddin, the Balad Air Base was hit by mortars, and finally, the K1 military base just outside of Kirkuk city received rocket fire that killed 1 U.S. contractor, 2 Iraqi police and wounded 2 Iraqi and 4 American soldiers. That left 114 incidents to the insurgency. That was just around the number seen before the protests, which was 119 in September. When the demonstrations started incidents dropped to 68 in October and 51 in November, the lowest total since the 2003 invasion. 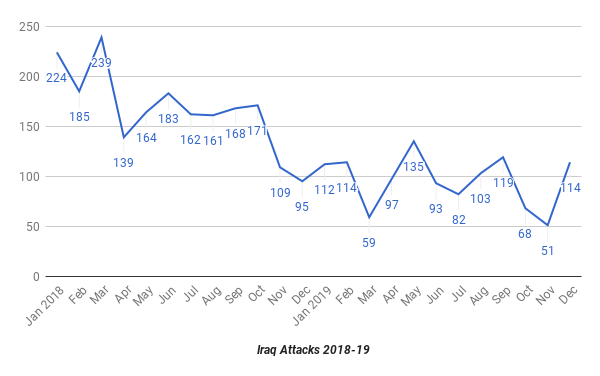 The increase in violence led to a high casualty rate. There were 134 dead and 133 wounded. 1 U.S. contractor, 9 Peshmerga, 28 Hashd al-Shaabi, 39 Iraqi Security Forces (ISF), and 57 civilians died. Another 4 U.S. soldiers, 4 Peshmerga, 33 civilians, 36 Hashd, and 56 ISF were injured. Diyala had the highest total with 50 killed and 50 wounded. The 267 total casualties in December was the most since 298 recorded in May.

Diyala remained the core province of the Islamic State. It carried out 42 incidents there. In November there were only 13. IS also changed its focus during the month. Previously, the majority were in the Jalawla-Khanaqin districts in the northeast, but in December there were only 10 incidents there. Instead, IS was targeting the center, especially the Muqdadiya district. That was partly because the government launched a security sweep through Khanaqin. IS shuts down operations during ISF campaigns and moves elsewhere. 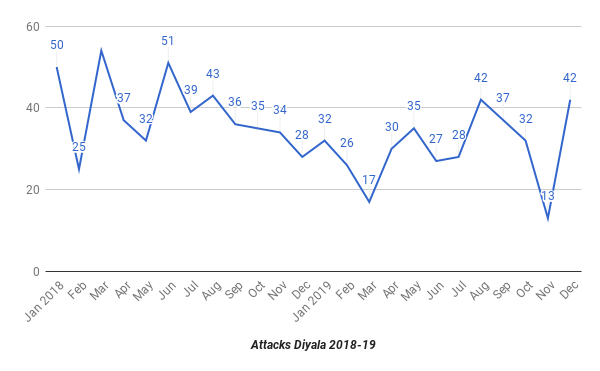 Like previous months the goals of these attacks were to challenge the local security forces, intimidate the population, and drive people out of rural areas so that new bases and camps might be created to train the next generation of insurgents. For example, there were 8 gun battles and 8 attacks upon checkpoints. That was the most scene 2018. IS has also gotten bolder. On December 1 there was an attack upon an army outpost and an ambush outside a Hashd base. Likewise, there was a report that in the Khanaqin District 50 families had fled and there were 6 villages that were totally empty of people because of IS. Another story quoted a commander in the Iraqi Forces who said that there were 25 abandoned villages in the province and that mukhtars and people who collaborated with the government were being targeted. Finally, the Human Rights Commission recorded around 250 families being displaced from the Khanaqin district during the year due to IS actions. This has been going on for months now with little response from the government. Yes, security operations occur but these have little effect. The result is that IS has been able to establish de facto control of several rural areas in the northeast and center of Diyala, which might pose a long term threat to the country.

IS made a return to Baghdad. There were 18 incidents in December, up from 9 in November and 3 in October. Earlier in the year the insurgents were slowly, but surely infiltrating back into the capital province going from 4 incidents in March to 10 in April to 15 in July to 25 in September. Almost all the attacks were in the outer towns in the north and south and a few in the west. IS started using motorcycle bombs in November. In December there were two more. Almost all IS activity is in the rural parts of the country. It has to move back to the urban areas to remain relevant, and Baghdad is obviously the most important of those. 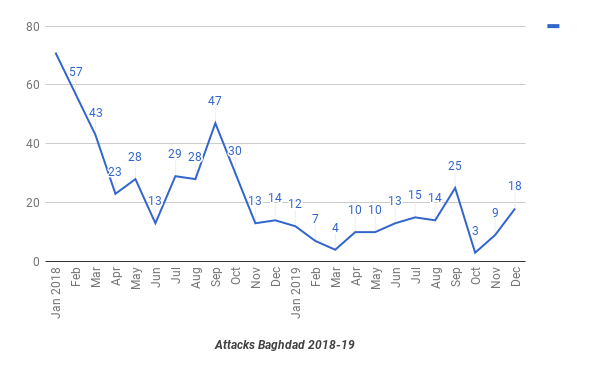 The militants picked up attacks in the rest of central and western Iraq as well. Incidents went from 0 in Anbar in November to 5 in December. That included a rare car bomb that went off in the Qaim district in the west. Attacks went from 11 in November to 17 in December in Kirkuk. That included 3 gun battles and 4 attacks upon checkpoints. IS also set up a fake checkpoint along the Tikrit-Kirkuk road and executed 6 civilians. In Ninewa there were 19 incidents in December versus 8 in November. There were 7 gun battles during the month. Incidents in Salahaddin went from 7 in November to 12 in December. A suicide bomber was discovered during a security sweep. He exploded his device before he was killed. There were two more car bombs as well that struck a Hashd unit. There were an additional 5 gun battles. Like Diyala, almost all of these attacks happened in rural areas. The three car bombs was also a big uptick, showing that the insurgents were back in business. There hadn’t been that many vehicle bombs since May. 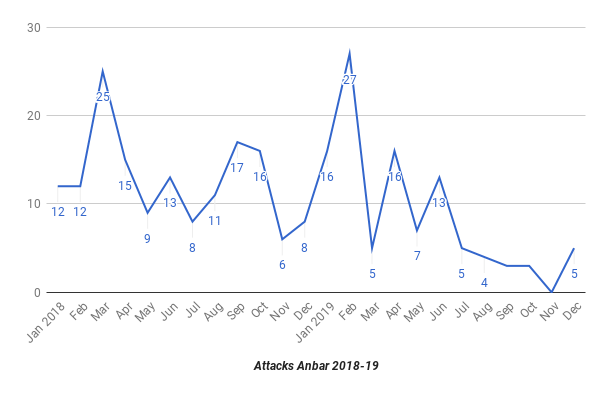 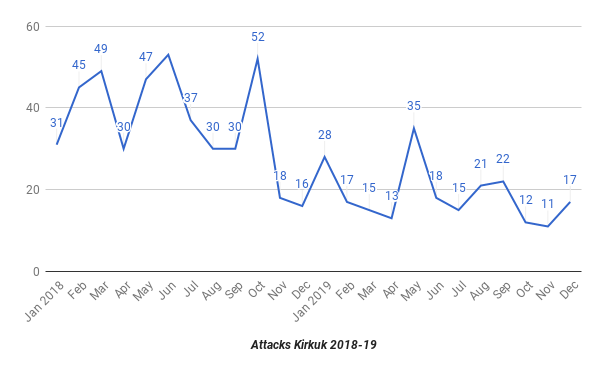 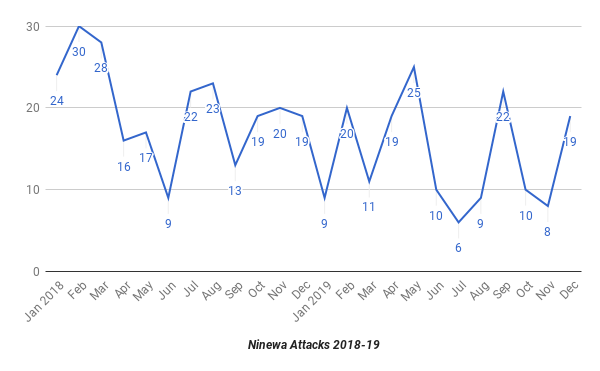 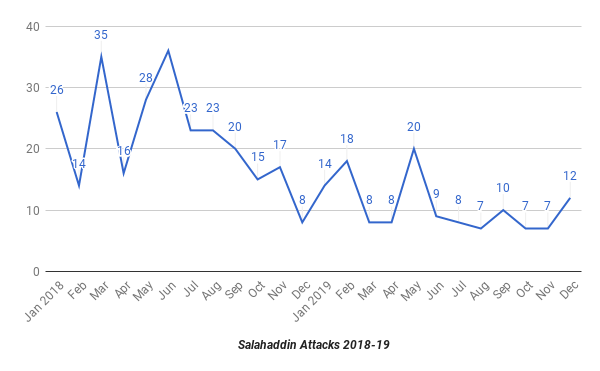 AIN, "Military reinforcements reach a village in Mosul after an ISIS attack," 12/19/19

Department of Defense, “Statement From Assistant to the Secretary of Defense Jonathan Hoffman,” 12/29/19

Shafaaq News, “Human rights document forced displacement from the outskirts of the Khanaqin district due to ISIS,” 12/24/19
- "Three members of the crowd killed and wounded near Baghdad, the third attack of its kind within hours," 12/2/19
- "Two members of the Federal Police were wounded in disputed territories attack by ISIS," 12/6/19

Sotaliraq, "Khanaqin: The body of a young man was found dead 5 days after his disappearance," 12/26/19