Review Understanding Iraq, the Whole Sweep of Iraqi History, from Genghis Khan’s Mongols to the Ottoman Turks to the British Mandate to the American Occupation 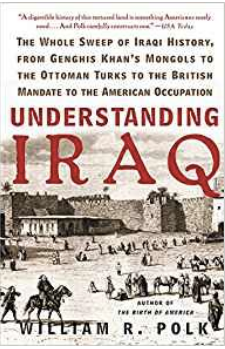 Understanding Iraq was one of many book written because of the 2003 invasion. Historian William Polk had decades of experience with that nation and even lived there for a time in the 1950s. The purpose of his book was to try to educate the West about Iraq and draw parallels between the past and present. Polk largely succeeded although there were a few problems along the way.


Polk broke up his history into six broad time periods. He starts off with the ancient period noting that Mesopotamia was the birthplace of civilization. The Ubaidians started farming, herding animals and irrigation, which created the Fertile Crescent which stretched along the Tigris and Euphrates Rivers over to Syria, Lebanon, Israel and Palestine. This led to thousands of years of new states, empires and invasions with the Sumerians, Akkadians, Assyrians, Persians, Macedonians, Parthians, and more. Many stories from the Bible originate from this area as well such as Noah’s flood and Nebuchadnezzar. Under the Ottomans, a new phase began as various migrating groups began settling down to become farmers. The sheikhs became landlords and the tribesmen something akin to serfs. Iraqis and the West have a great affiliation for this historical period. Many ancient artifacts and structures were taken by Europeans and Americans and fill their museums. Polk does a good job quickly running through the main trends during this period, while attempting to draw parallels with the modern era such as the importance of farming, and the birth of autocrats with grand aspirations, which he tries to tie to Saddam Hussein.

The next chapter is on the British Mandate and monarchy, which has the greatest lessons for the present day. The English invaded the Ottoman province of Basra in 1914 during World War I and proceeded to take Baghdad province, and Mosul after the war had actually ended. The fight was far more costly then London predicted. At the Battle of Kut for example, an entire division was surrounded, 7,000 died and 13,000 surrendered. Iraq was then created by the League of Nations as a mandate, which immediately brought the opposition of the inhabitants and led to the 1920 Revolt. The British then agreed to Iraqi independence but under its tutelage. Elections and a parliament were created, but they were more in name than function. The same group of politicians such as Nuri al-Said dominated all the governments, and the voting was determined beforehand. In 1936 Iraq had its first coup as the military became more powerful and thought it should run the country. Anti-British sentiment and pan-Arabism finally came to the fore in the 1941 Anglo-Iraq War, which Polk actually completely misrepresented. He claimed the Iraqi military acted because the British cut off arms and then they eventually went to Germany for help. In fact, the military was courting Germany and Italy for quite some time seeing them as a counter weight to the British and hoping to get not just real independence for Iraq, but other Arab lands as well. Polk draws many similarities between the British period in Iraq and the American one after 2003. Both countries implemented top down administrations, not including the Iraqis in the process and picking their leaders and controlling their economy and future. This led to armed resistance as seen in the 1920 Revolt, the insurgency and the Sadr revolts after the U.S. invasion. The costs of the war and occupation were also far more than either foreign nation anticipated. If the Bush administration had taken the time to learn just basic Iraqi history they might have avoided a lot of problems. Instead their ignorance led them to repeat the past.

Polk also covers the revolutionary period of military leaders in Iraq starting with the 1963 coup into the Baath era, Saddam Hussein, and then the U.S. occupation. Polk’s main theme about the military and Baath rule was that they constantly struggled between pan-Arabism and an Iraqi first policy with the latter usually winning out. Thanks to a boost in oil prices in the 1970s the Baath were able to finance an economic and development boom, which was then derailed by the Iran-Iraq War and the invasion of Kuwait. The author unfortunately blamed the 2003 invasion of Iraq upon neoconservatives. This was a very popular idea in the early 2000s, because that group was one of the most vocal proponents of regime change. In reality, the neoconservatives were all mid-level officials in the Bush administration. President Bush was not one of them and had his own motivations for the overthrow of Saddam Hussein. What the author did get right was that the Americans, like the British, did not include Iraqis in the occupation, which led to all kinds of problems, most significantly armed resistance. Polk argued for an American withdrawal in the hopes that would lead to real Iraqi sovereignty.

At just over 200 pages Understanding Iraq is not a bad place for novices to start their history lessons about Iraq. Polk writes in a very readable style, and doesn’t go into too much depth into any given topic, which might lose the reader who doesn’t have a background in the country. The parallels between the British and American periods are also very important lessons that people should read about because it explains why things went wrong after 2003.