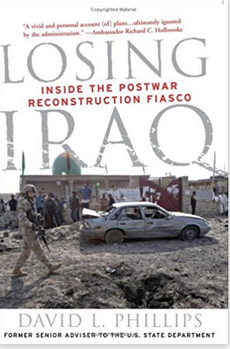 Losing Iraq, Inside the Post War Reconstruction Fiasco by former State Department official David Phillips argues that the United States failed in Iraq. Phillips was involved with the Future of Iraq Project, which brought together Iraqi opposition figures to plan for a post-Saddam Iraq. He adds important information about what the State Department was doing before the 2003 invasion, which has largely been overlooked for the activities of the Pentagon, the CIA, and the White House. Phillips believes that Washington didn’t plan for postwar Iraq, and made things worse during the occupation.


Phillips was one of the few early writers on the Iraq war that broke down the different factions within the White House that supported the invasion. One group was what Phillips terms hegemonists made up of Vice President Dick Cheney and Defense Secretary Donald Rumsfeld who believed in using military force to deal with threats to the United States. Another group was the neoconservatives who were mid-level officials like Deputy Defense Secretary Paul Wolfowitz and the head of the Pentagon’s Defense Policy Board Richard Perle. They believed the war on terror opened the door to transform the entire Middle East. The last were the pragmatic internationals, which was Secretary of State Colin Powell who thought building international coalitions was important for any military operations. The administration was split between the hegemonists and neoconservatives on one side who were hell bent on war and the pragmatists who believed in a different strategy. This caused bureaucratic wars, distrust, and back stabbing within the administration. Phillips blames National Security Adviser Condoleezza Rice for failing to fix these divisions. He argued that the role of the National Security Council was to negotiate and mediate between the different agencies within the government, but she never did that. Losing Iraq stands out for its breakdown of the pro-war groups in the White House. Many early books focused solely on the neoconservatives because they got so much media attention, when none of them had any major positions within the government. Phillips pointed out that they were only one of three groups. The problem is that President Bush’s position is missing. There’s nothing on why he wanted to overthrow Saddam, which is surprisingly a failure of almost every book trying to explain the Iraq War.

The heart of Losing Iraq is about why the U.S. failed. The first half covers the lack of postwar plans. Phillips places most of the blame upon the Pentagon who wanted to put the Iraqi National Congress’ Ahmed Chalabi into power. Chalabi left Iraq when he was 12 years old, and had no real base in the country. He was hugely successful at winning over friends in the United States and within the Bush administration. Before and after the invasion the Defense Department constantly lobbied for Chalabi to run Iraq, which ultimately failed. Promoting him was no plan for running a country. One of the faults with Phillips’ argument however is that he promoted the State Department’s Future of Iraq project, which was largely drafted by Iraqi exiles just like Chalabi. Most of these people had been out of Iraq for years and had little idea about what it was like after being away so long. Some of the groups like the Supreme Council for the Islamic Revolution in Iraq (SCIRI) were financed by Iran, which had different ideas about postwar Iraq then the United States, but that was largely ignored. Philips was right for critiquing the Pentagon’s choice of Chalabi, but he overlooks the State Department’s failing for relying mostly upon similar exile figures.

The United States had other problems before the invasion as well. One was State’s Future of Iraq Project was beset by factionalism. The INC tried to dominate one of the main groups, which caused deep resentment from others. That played out in other forums as well. In November 2002, the U.S. promoted an opposition conference in London for example, which was supposed to come out in support of America’s goals in Iraq, which was a unified country that was at peace with its neighbors and the region. The meeting devolved into a circus as the INC once again tried to take things over. Washington did little better with two of Iraq’s main neighbors Iran and Turkey. America had worked with Iran during the invasion of Afghanistan, but President Bush put Tehran into the Axis of Evil. The U.S. was rightly afraid of Iran’s influence over the Shiite parties like SCIRI and Dawa, but did little to counter it and even gave SCIRI a promote role before and after the war. America also wanted to use Turkey as a northern front during the invasion, but Ankara wanted to intervene in Iraq afterward to make sure the Kurds didn’t gain more power, which constantly angered Washington. The U.S. tried offering a huge aid package and hosted several meetings with the Turks, but in the end, they refused to help. Again, Phillips blames the Bush administration for failing to take into consideration all of the factors necessary for a successful invasion. It was so set upon war that it believed it could overcome all of these issues, which proved to be a huge mistake. Dealing with the opposition, Iran and Turkey were also tasks mostly handled by the State Department, and helps give a fuller picture of what different parts of the U.S. government were doing leading up to the war.

The second part of Losing Iraq covers familiar territory with a critique of the U.S. occupation. First, the Pentagon was given control of postwar Iraq. That meant many countries and non-governmental organizations were unwilling to contribute because they did not want to be under military control or be associated with the invasion. Second, the Office of Reconstruction and Humanitarian Assistance (ORHA) was put together by the Pentagon just two months before the invasion. It had no idea about any previous war planning like State’s work because of the divisions within the administration. Nothing it planned for like oil fires or a refugee crisis occurred. The lack of a strategy immediately played out when the U.S. military had no instructions for what to do the day after the regime fell. That led it to stand aside as Iraqis looted and destroyed government offices, which was a huge setback for the occupation. The Coalition Provisional Authority eventually took over running Iraq and made the situation worse but its deBaathification policy, disbanding the military, attempting free market shock therapy, refusing to incorporate Iraqis, ignoring Ayatollah Ali al-Sistani, and refusing elections. The U.S. lost standing with the Iraqis quickly, and was forced to turn to the United Nations to help transition to Iraqi sovereignty even though the White House rejected the international body beforehand. Phillips wrote Losing Iraq in 2004 when this critique was fresh news. Today, it’s common knowledge that the Pentagon, ORHA and the CPA mishandled Iraq. They went from one crisis to another, and had a knack for exacerbating situations. At the time, Phillips wasn’t sure if the U.S. had completely lost control of  Iraq, and was still trying to be optimistic. It’s clear now that this was an unmitigated disaster.

Phillips was one of the first to point out that the United States went to war without a strategy which doomed its prospects. The factionalism within the Bush administration meant there was never one single unified effort to plan for Iraq. The State Department’s Future of Iraq Project for instance, was done separately from the Pentagon’s work. That meant when the invasion ended there was no grand strategy. That left the occupation authorities to run things on an ad hoc basis making one mistake after another. The White House only focused upon the removal of Saddam and thought everything else was going to be easy when it was the exact opposite. Losing Iraq is a quick and easy read that helps explain what went wrong.