Spike In Violence In April 2020 But Can It Be Sustained?

April 2020 saw a spike in violence in Iraq. There was a total of 110 incidents, the most since 114 in December 2019. The country has seen several such increases in attacks only for them to drop off in the following months. The question then is whether April was one such jump or whether it will be sustained? 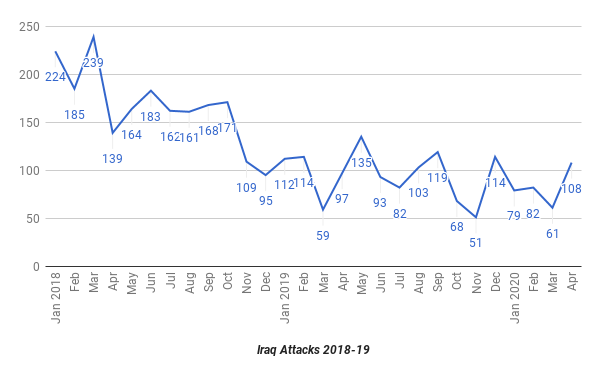 Of the 110 incidents in April 108 were by the Islamic State and 2 were by pro-Iran groups. On April 6 rockets were fired at the American Halliburton compound in Basra, and then on April 18 rockets were fired at a Chinese company working in east Baghdad. As usual, Diyala had the most incidents with 42 followed by 24 in Kirkuk and 17 in Ninewa. Oddly there was no IS activity in Baghdad which had been a main priority in previous months.

The 108 IS incidents led to 81 dead and 163 wounded. That consisted of 2 Sinjar Protection Forces, 15 Hashd al-Shaabi, 18 civilians, and 44 Iraqi Security Forces (ISF) losing their lives along with 3 Sinjar Protection Forces, 36 civilians, 35 Hashd, and 89 ISF. It’s noteworthy that there were more ISF and Hashd casualties than civilians during the month when it is almost always the opposite. That showed that the militants were going after military targets in April. Diyala had the most casualties with 85 followed by 75 in Kirkuk and 33 in Ninewa.

There were 10 incidents in Anbar. That was up from 5 in February and 6 in March. The province was an example of what the insurgents were doing throughout the month. There was an attack upon a checkpoint, an army patrol, the civil defense director in Rutba, a military base, and a village. In total, there were 19 casualties, with 6 ISF dying and 6 being wounded showing that IS was going after the security forces more than civilian targets. Most of the attacks were also in the west in the Rutba district heading towards Jordan. Overall however, Anbar remains a secondary front for the militants. 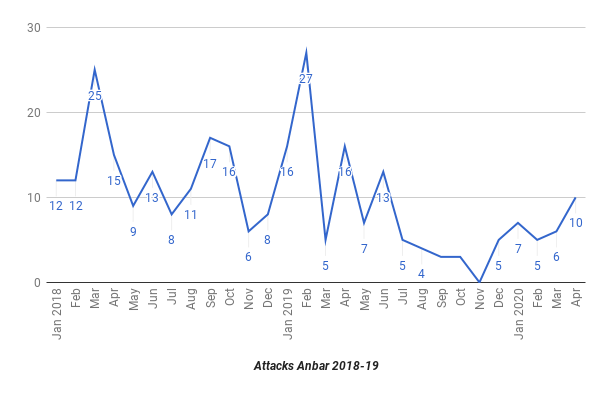 Besides the pro-Iran attack upon the Chinese company there were no other incidents in Baghdad during the month. Before IS was making a concerted effort to return to the capital. In 2019 it built up attacks from just 4 in March to 25 by September only to pull back when the protests against the government began in October. Then it started all over again going from 3 in October to 24 in February. Since then there were 7 in March and then 0 in April. This along with the emphasis upon the ISF and Hashd could point to a turning point in the group’s rebuilding in Iraq. It might be aiming for more military control of the rural areas it is based out of and postponing a return to the cities. 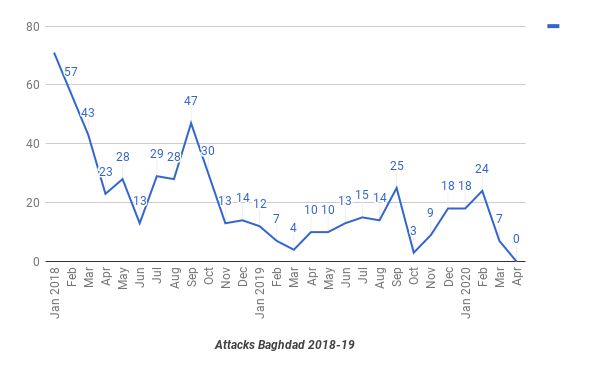 Attacks went up in Diyala, Kirkuk and Ninewa. Incidents in Diyala went from 23 in January to 24 in February, 26 in March and 42 in April. That was the most since 42 in December 2019. That included an IED on a patrol, an IED on a convoy, a motorcycle bomb, 2 attacks on checkpoints, 2 electricity towers being blown up, and 4 gun battles. That led to 85 casualties total, 62 of which were members of the ISF and Hashd. Almost half of the attacks were in the center of the province instead of the northeast as they usually are. The militants still have full access to every part of the governorate, but usually focus upon the Khanaqin-Jalawla districts in the northeast where there is a gap between the ISF and Peshmerga which is being exploited. After that however, the middle of Diyala has also been a prime target. In Kirkuk, attacks jumped from 1 in March to 24 in April. That was the most since 35 in May 2019. A village was attacked, there was a gun battle with the Federal Police where 3 officers were kidnapped with two of their bodies being found later, the North Oil police director’s convoy was ambushed, 3 checkpoints were assaulted, 5 other shoot outs, and there was a very rare suicide bombing aimed at the intelligence directorate in Kirkuk city. Almost all of this activity took place in the south where IS was never rooted out during the war. There were 75 casualties in the governorate 73 of which came from the ISF and Hashd. Finally, incidents went from 8 in March to 17 in April in Ninewa. That was the most since 19 in December. A civilian was kidnapped and executed, an army patrol was ambushed, a village was attacked, and four checkpoints were fired upon. Unlike the other two provinces 18 of the 33 casualties were civilians. Diyala has been the center of IS attacks for months now followed by Kirkuk. Ninewa however has seen incidents go up and down appears to be more of a secondary front. 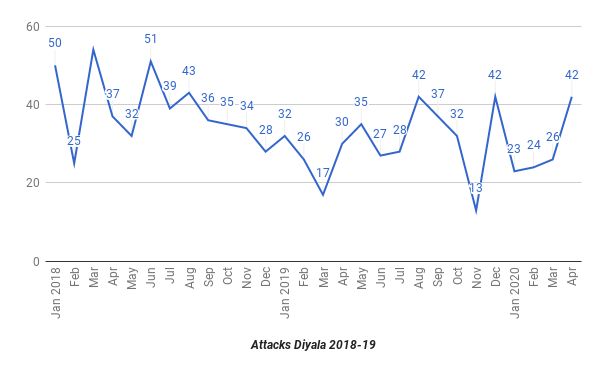 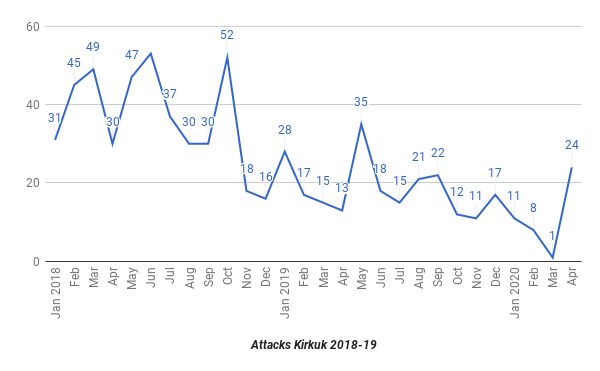 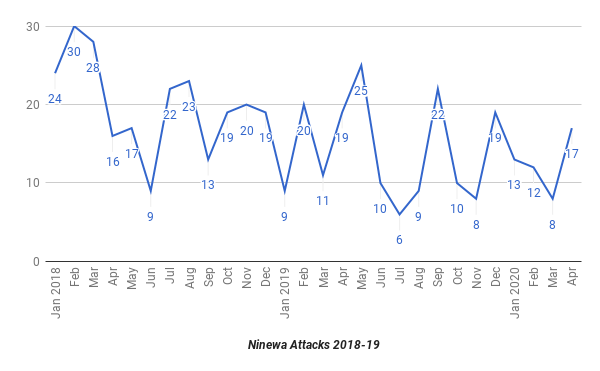 Salahaddin was the one exception during the month because incidents went down there. There were 11 in March and 8 in April. That was around the same level as seen for the last year. There were three gun battles, and a kidnapping. Again, the security forces were targeted with 16 of the 20 casualties coming from the ISF and Hashd. For the last two months the insurgents have been striking the Tuz Kharmato district in the east. That was a decided change because that area had not been consistently targeted since September 2019. 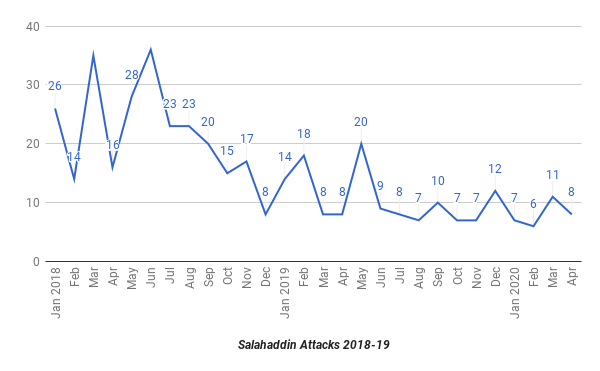 There were two more incidents in Irbil and two others in Sulaymaniya. An IED hit soldiers in the Makhmour district and Peshmerga were fired upon in the Kalar district in Irbil, while there was a gun battle and an IED aimed at the Peshmerga in the Kifri district of Sulaymaniya. The Islamic State has attacked Irbil every month this year, but November was the last time Sulaymaniya was hit. These appear to be examples of IS probing new areas of opportunity to expand its operations.

Finally, there were 3 incidents in Babil. All of those were in the Jurf al-Sakhr district in the northwest. That is a Hashd base and it looks like IS infiltrates a few fighters into the area every now and then because there are so many targets there. There have been around 3 incidents there a month since the start of 2019. 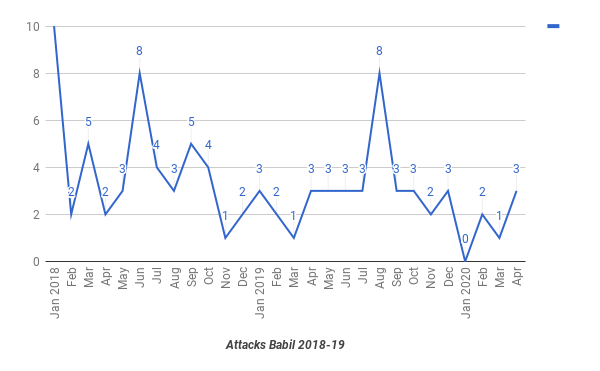 Since 2019 there have been constant spikes in violence in Iraq. January and February 2019 there were 112 and 114 incidents respectively. Then 135 in May, 119 in September, and 114 in December. There were large drops afterward. That raises the question of whether April was just another one-off affair or is the Islamic State aiming for a sustained effort, something that hasn’t happened since the summer of 2018. The group may not have rebuilt its cadres enough to do that yet, but only time will tell.

AIN, "3 people, including two children, were killed and wounded in an explosion in western Mosul," 4/5/20

Al Ghad Press, "A source reveals details of the Abu Said incident in Diyala and confirms the fall of 3 victims," 4/21/20

Iraq Newspaper, "A fierce battle between Brigade 47 of the popular crowd and ISIS terrorists in the village of Saidat, Jurf al-Sakhr, Lami warns," 4/23/20
- “The ISIS terrorists kill Lieutenant Ali Nimr and his assistants in an ambush in a tunnel in Hawija,” 4/7/20

Al Maalomah, "Two sheep herders martyred by ISIS attack on the border between Diyala and Sulaymaniya," 4/12/20
- "Two soldiers wounded by an explosive device, west of Anbar," 4/23/20

Rudaw, "Mortars fall near a government department in Diyala," 4/30/20

Al Sumaria, "A civil defense director was injured in Al-Rutba by an explosive device, west of Ramadi," 4/15/20
- "Diyala intelligence director survives and 6 security personnel wounded, when an explosive devices explodes in Hamrin," 4/22/20
- "Gunmen attack the convoy of the Director of the North Oil Police in Kirkuk," 4/14/20
- "One person was killed and another wounded, in a mine explosion west of Ramadi," 4/1/20
- "A person was killed by a bomb blast west of Ramadi," 4/29/20
- "Security media: Two fighters were killed and three wounded in an explosion near Makhmour," 4/3/20
- "Three mortar shells landed on Abbara, northeast of Baquba," 4/23/20
- "Two members of the tribal crowd were killed and a third was wounded in repelling an ISIS attack in Diyala," 4/23/20