Review Duty, Memoirs Of A Secretary At War 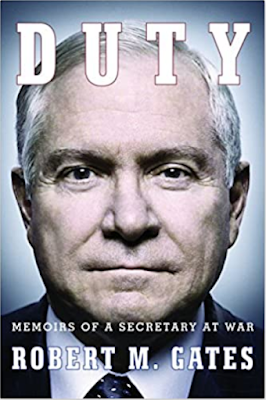 Robert Gates had a long history in U.S. government service. His last position was Secretary of Defense, which he held at the end of the Bush administration into the first term of President Obama. His memoir of that time Duty, Memoirs Of A Secretary At War covers the bureaucratic wars he went through, the difficulties he had with the military, and various challenges the United States faced, most importantly the wars in Iraq and Afghanistan. His most major incites come from the handling of those two conflicts. He found that the Pentagon and military were not committed to either one believing that they were aberrations, and he found American politics corrosive to running both.


The first big task Gates dealt with in the book was Iraq. He was first contacted at the end of 2006 to replace Secretary of Defense Donald Rumsfeld by President Bush to help introduce a new strategy the Surge. Gates realized that both the public and political class had turned on the war by the time the Surge started, so he saw his role as dealing with Washington to try to maintain what support he could find to give time for the military to be successful in Iraq. First, he would acknowledge past mistakes and then stall for time. Then when the Surge started showing success he started talking about withdrawals again with the goal to draw things out. While he was happy with the military results and the reduction in violence he came to accept the fact that the U.S. could not get Baghdad to pass any major laws or carry out reconciliation. Instead he believed the American role could be as a mediator between the various factions. He also believed Iraq would need a long term commitment from Washington to sustain the improvements.

He didn’t seem half as involved under the Obama administration. The new president campaigned about ending the Iraq war. He was committed to the withdrawal timeline laid out by his predecessor but agreed with Gates that a stay behind force was necessary. When a new treaty was not possible with Baghdad which Obama felt was needed to allow a small number of troops to remain he was happy to say that it was over. It’s surprising that Gates didn’t write more about this turn of events. After he repeatedly said he wanted the U.S. to be in Iraq to make sure things didn’t fall apart, he had little to say when the American military couldn’t stay. That seemed to be a fundamental failure of his point of view, but it went with little comment. That’s perhaps because he was much more involved and frustrated with Afghanistan by that time. The other issue he kept emphasizing was that Iraq was so toxic by the time that he came into office that there could be no open debate about it. Every public forum politicians took to showboating and giving diatribes to their constituencies rather than really dealing with the war. Gates would find that a problem with Afghanistan as well.

The Secretary believed that Afghanistan was neglected. The U.S. had invaded in 2001 but immediately shifted focus to Iraq and didn’t give the first conflict the time, attention and troops necessary to be successful. Like Iraq the U.S. also underestimated the enemy. Gates argued that the U.S. should focus upon services, local governments, and building up the Afghan forces so that they could eventually take over security. Under both Bush and Obama Gates faced nothing but trouble. First, more troops couldn’t be sent while the Surge was going on in Iraq. Then there were several different military commands and different development agendas all run by different groups and countries making managing the war a complete mess. These problems were never fully resolved. Bush sent some more troops at the end of his presidency but then he and Gates both agreed that the next administration should decide on what new strategy should be taken. That turned into another headache for Gates. There was a very long and thorough in the new White House and Obama eventually agreed to troop increases for a counterinsurgency-counter terror policy that the Secretary agreed with. The problem for Gates was that the debate became venomous for him. One group of advisors led by Vice President Joseph Biden believed that domestic politics were more important than fighting the war and constantly argued against more troops, and then when that was decided tried to undermine the policy at every turn. On top of that, military officials kept going to the press pushing their strategy choice which caused resentment within the White House and gave more ammunition to Biden and his camp. Like Iraq, Gates believed politics trumped national security in the discussions.

Gates third main point was that he didn’t believe the military or Pentagon was fully committed to either war. Instead they kept planning for the large conventional conflict they wanted like a showdown with China or North Korea. That meant they always wanted new aircraft carriers, bombers and the latest jet fighters instead of equipment that would help the troops in Iraq and Afghanistan. For instance, he relayed the story of the Mine Resistant Ambush Protected Vehicle (MRAP) which was designed to withstand improved explosive devices (IEDs) which were one of the biggest problems in Iraq and was a growing threat in Afghanistan. The military opposed it because they thought they would all be thrown away after the two conflicts were over, and the Pentagon wasn’t interested either because it didn’t fit the view of the new transformation in military affairs that Secretary Rumsfeld was pushing. Gates had to fight the bureaucracy and then luckily got support from Congress to greatly increase the manufacturing of the vehicle which saved countless lives. Another issue was drones. There were not enough for either war. This was largely due to the fact that the Air Force was opposed to them because they wanted piloted planes. They would only allow officers to operate drones and told them they could not advance their career by flying them. Only around half the drones the Americans had were deployed to Iraq and Afghanistan in the first place. Again, the Pentagon was thinking of bombers and fighters and taking on a big country rather than winning the on-going wars. Gates had to go through a huge bureaucratic mess to get more drones. Both of these incidents played into the Secretary’s fears that the military wanted to put Iraq and Afghanistan behind them as quickly as possible, forget everything they learned like happened in Vietnam, so they could go back to business as usual. The Pentagon and military turned out to be heavily invested in the status quo, and the two wars were seen as inconveniences. Gates never commented on how this worked out, but he was right. The Defense Department and services do want to put the two conflicts behind them as seen by the fact that they delayed the release of the Army history of Iraq and would not distribute public copies to the press and scholars because they argued the war did not fit its long term strategic planning for the future.

Duty covers plenty of other issues that Gates encountered, but really the most important lessons to be learned come from his experiences with Iraq and Afghanistan. Gates wrote that the only way to be successful in wars was to fully and publicly commit to them and explain to the public that only thinking long term can they be successful. They have to put that national interest above domestic politics that can turn at any time. He also believed that Americans could only maintain their support for so long so the White House has to do as much as they can with the time given them. He thought the U.S. successfully maneuvered this mine field with Iraq, even though he admits he didn’t get the stay behind force he wanted. On the other hand, he thought domestic concerns got in the way with regards to Afghanistan. He constantly felt at war with factions within the administration over policy which made a difficult situation worse. A White House at war with itself is no way to manage a conflict. On the other hand, what he never made that much headway with was the mindset and bureaucracy of the military and Pentagon. They had their vision, and fighting insurgencies was not included. The idea that American had to prepare for a range of different wars never got buy in from the institutions. That probably means the next time the U.S. intervenes in a developing country they will have to learn everything all over again just as Gates feared..