Review The Endgame, The Inside Story of the Struggle for Iraq, from George W. Bush to Barack Obama

Gordon, Michael and Trainor, General Bernard, The Endgame, The Inside Story of the Struggle for Iraq, from George W. Bush to Barack Obama, New York: Pantheon, 2012 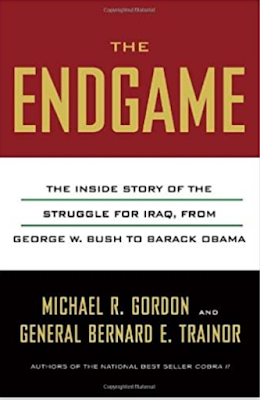 The Endgame, The Inside Story of the Struggle for Iraq, from George W. Bush to Barack Obama is an expensive history of the U.S. involvement in Iraq from the 2003 Invasion to the military withdrawal in 2011. Authors Michael Gordon and retired General Bernard Trainor said they would cover the political and military battles the Americans fought in Iraq and why they happened. Their argument was that both the Bush and Obama administrations made a series of strategic mistakes throughout the war. The problem was the explanations were lost in all the minutia.


There are four main topics covered in The Endgame starting with the planning for the invasion and the early American occupation of Iraq. President Bush had large aspirations for Iraq. He believed it would be a demonstration of U.S. power in the Middle East after 9/11, a warning to Syria and Iran, and a chance to transform the region by creating a democracy. The problem was his administration only cared about the invasion and never adequately planned for what would come afterward. As a result, the country was run in an ad hoc manner. The Office of Reconstruction and Humanitarian Assistance was the first organization to administer Iraq and planned for a quick handover to Iraqi rule. It was replaced by the Coalition Provisional Authority that reversed course and wanted a long term occupation to build institutions. The White House thought that would take too long and switched back to a swift return of Iraqi sovereignty, but again with no idea of what would come next. When the U.S. military finally came up with a campaign strategy it was to hold elections in 2005 and try to contain the insurgency until the Iraqi security forces were built up enough for them to take over and the Americans could withdraw. This wasn’t a plan to win, but to leave, and yet all the president ever talked about was victory. Plenty of people within the administration realized the disconnect between the two and yet nothing changed. By 2006 Iraq was in the midst of a civil war. Gordon and Trainor were one of many American authors to note that the Bush White House had no idea what it was doing in Iraq. They thought removing Saddam was all that mattered and were caught off guard when it turned out they were going to have to run a foreign country. The book documents all the different changes the U.S. went though from a short occupation to a long occupation back to a short occupation to trying to get the Iraqis to run the country even though they weren’t ready. Here you run into the main problem with the book. Gordon and Trainor go into so much detail about each event that the larger story of the mistakes the U.S. were making often gets lost. It’s difficult to keep focused on the big picture when given so much information.

The following parts of the book covered the 2007 Surge, the Obama administration, and the rise of Prime Minister Nouri al-Maliki as an autocrat. Tons of interesting stories are revealed in the process. Moqtada al-Sadr for instance controlled the Baghdad airport in the 1st Maliki administration which allowed his party to steal from the state, fly members of his militia and organization out of the country when they were wanted, keep tabs on Americans and other foreigners flying in and out of the country, and lay IEDs on one of the most dangerous roads in Iraq going from the airport to downtown Baghdad. The Endgame goes behind the scenes of the Obama White House and how it dealt with the disputed 2010 election when Prime Minister Nouri al-Maliki came in second. The U.S. military commander in Iraq General Ray Odierno was concerned Maliki would not leave office no matter what and wanted some direct intervention to try to stop the premier from undermining the political process. The U.S. Ambassador to Iraq James Jeffrey and Vice President Joe Biden believed Maliki was the best that Washington could and therefore supported his second term. There was some talk about coming up with an alternative to Maliki, but there was little support for that amongst the Iraqi parties. Finally, the decision was made to back Maliki but make him agree to power sharing with Iyad Allawi who came in first in the vote. The prime minister never followed that agreement, and the U.S. did little about it afterward. Gordon and Trainer went through Obama’s failed attempt to get a second Status of Forces Agreement (SOFA) with Iraq that would allow some U.S. troops to stay behind after the agreed upon withdrawal date at the end of 2011. At first, the president was open to keeping up to 30,000 troops in Iraq, but as talks over the SOFA collapsed and members of his administration discussed smaller and smaller numbers of soldiers staying the president eventually gave up and claimed success when the last U.S. troops left the country. Obama ran for president on the promise that he would end the Iraq War and that ultimately proved his biggest concern. Like the first part of the book however, the problem was there are so many details that the main points were easily forgotten. There is also little analysis either. An entire chapter for instance is devoted to Obama and the failed SOFA, but the consequences are barely mentioned.

The Endgame was one of the few books to cover the Iraq War from the perspective of both the Bush and Obama administrations. Nearly every twist and turn were covered, which was also the main drawback. The authors collected so much information it seemed like they couldn’t hold back from including it all. Some of it was very interesting and some of it not. The point was there were too many specifics and not enough commentary and very little analysis on what it all meant. The main point of how Iraq was one mistake after another is easily overlooked. The Endgame is still an important book to read because it includes so much of what happened during the American occupation. If you want to understand why things went so wrong however, you would be better off looking elsewhere.