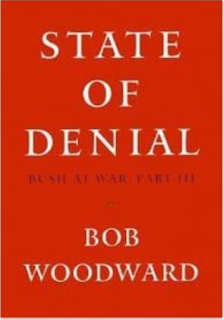 State of Denial, Bush At War, Part III as the title suggests was Bod Woodward’s third book on President Bush’s wars. This one covered how the occupation of Iraq went wrong. It is a longwinded affair starting with George Bush’s deciding to run for president. It takes 152 pages just to get to the 2003 invasion of Iraq. Like his other releases it focuses upon top officials in the White House and their debates and decision making on the war based upon extensive interviews. Woodward’s main argument was that President Bush and Secretary of Defense Donald Rumsfeld were never honest with themselves and the American public about Iraq and that trickled down throughout the administration where no one ever admitted they made any mistakes.


The first thing Woodward went into was the lack of serious planning for the invasion of Iraq. There were problems with the process right from the start but because so many different agencies were working independently with no coordination they never came to the fore. Everyone agreed quickly setting up an Iraqi government was a priority, but no one decided on how to do it. There were no plans for securing Iraq because the idea was to get to Baghdad as quickly as possible and depose Saddam Hussein. The Office for Reconstruction and Humanitarian Assistance (ORHA) that was supposed to run postwar Iraq was told by U.S. intelligence that they could expect all the Iraqi police and government employees to leave their jobs during the invasion and they wouldn’t return unless they were guaranteed their pay. This contradicted the White House and Pentagon assumption that the Iraqi government would still be running the day after the war ended. The U.S. therefore invaded a county with no real plan for what to do afterward and no one in the Bush administration seemed to care.

Woodward blamed Rumsfeld as the main culprit for these issues. The Secretary of Defense demanded absolute control over everything, was a micromanager, never coordinated the planning and actually undermined it with his pettiness. Rumsfeld for instance, refused to share information. He would give briefings and then chide people for taking notes and wouldn’t give handouts which stifled other parts of the government who were also working on the war. Worse he would deny responsibility for anything even though he wanted all the power. State of Denial provides plenty of evidence of how the planning for the invasion was dysfunctional and how the personal politics of Rumsfeld were a major cause. Woodward should have also included National Security Advisor Condoleezza Rice who was supposed to coordinate the government agencies. She’s mentioned, but the author seems to let her off the hook because she was dealing with such domineering figures as Rumsfeld, but that’s no excuse. Other books have called Rice one of the worst National Security Advisers ever and for good reason. She was guilty as the rest as she never tried to find consensus on Iraq. Woodward also doesn’t mention Bush much because he was largely absent. He delegated authority and his main role came down to being briefed and okaying what he was told. His lack of leadership is apparent throughout.

The second part of State of Denial deals with how the occupation of Iraq immediately went wrong. ORHA didn’t get any help from the military who actually tried to keep it out of Iraq. When it finally arrived, Rumsfeld told them they were being disbanded for the Coalition Provisional Authority and new leadership under Paul Bremer. Bremer had no experience in post-conflict countries, the Middle East or rebuilding. He was given orders to deBaathify and disband the military from the Pentagon, which went against the ORHA plans that were okayed by the president. Bremer was like Rumsfeld and micromanaged everything. Speaking of the Defense Secretary, he only cared about the invasion and had little interest in the occupation. As a result, National Security Adviser Rice tried to get control of the CPA, but Bremer ignored her. In 2005 Rice decided there was no clear Iraq strategy so she created Clear, Hold, Build where areas would be cleared of insurgents, held so that the armed groups wouldn’t return, and then rebuild would begin. The problem was she did not check this policy with anyone else, including the military who were supposed to be implementing this concept. At the very top President Bush didn’t seem to understand the war. He constantly asked for how many insurgents were killed thinking a body count was how to measure success. Most importantly, neither the Defense Secretary nor the president ever admitted to anything going wrong. Bush’s whole world view was being positive. He only talked about victory and didn’t accept any bad news about Iraq. The U.S. made egregious mistakes and Iraq was heading towards civil war by 2005. The book does an excellent job showing that during that whole time the only thing you heard from Bush was that America was winning. Woodward argued rather successfully that the president was never honest with himself, and definitely not with the American people.

Bob Woodward lays out plenty of details on how the Iraq War was a disaster right from day one. Rumsfeld’s style made sure that there was never going to be any effective planning. He undermined the whole process. To make matters worse he got control of postwar Iraq and then excused himself. That left the whole situation in limbo with no strategy. The president didn’t seem to notice because his positive mental attitude meant nothing could go wrong and he dismissed news to the contrary. State of Denial does a great job laying out how these two leaders the president and his Secretary of Defense failed as leaders, and the U.S. and Iraq had to pay the consequences.