The Islamic State launched a new campaign in Iraq in April, which has continued into May. Attacks have gone up nearly every week as a result.

During the second week of May there were 49 security incidents reported in the media. That was up from 44 the week before, but one of those was by a pro-Iran group. 49 attacks in one week hadn’t been seen since the third week of October 2018. 22 of those incidents occurred in Diyala, 6 in Salahaddin 5 each in Ninewa and Kirkuk, 4 in Anbar, and 3 each in Babil and Baghdad. 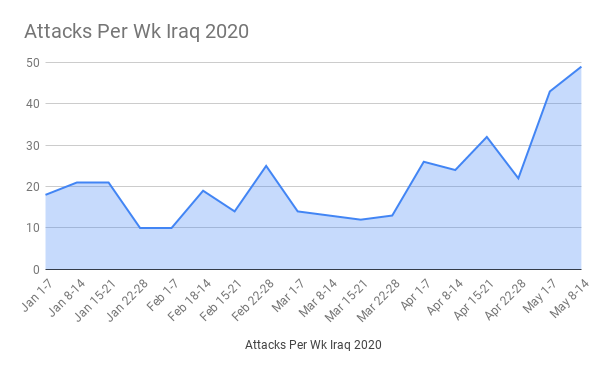 There was a total of 68 casualties during the week down from 83 the first week of May. 1 Peshmerga, 2 members of the Iraqi Security Forces (ISF), 7 Hashd al-Shaabi and 11 civilians were killed, along with 2 Hashd, 7 ISF and 38 civilians being wounded. In April and the first week of May the security forces accounted for the vast majority of casualties which was a decided change from previous IS attacks. The 2nd week of May went back to civilians being the main victims. Diyala had the most casualties with 32 during the week.

Anbar, Babil and Baghdad are now of secondary concern to IS. There were 4 incidents in Anbar. That included a suicide bomber being discovered by the security forces who blew himself up in the Rutba district in the west towards Jordan, an attack upon civilians in Fallujah that left 3 dead and 4 wounded, and two infiltration attempts one along the Syrian border and the other in the south towards Najaf. Babil saw 3 incidents, which is above average. All took place in the Jurf al-Sakhr district as usual in the northeast including an attack upon a checkpoint, an infiltration attempt, and an attack upon the Hashd. Those resulted in 2 Hashd deaths and 1 wounded. Finally, there were 4 incidents in Baghdad with 3 IEDs and a sticky bomb explosion in one eastern and 3 southern sections of the province. Anbar used to be a main front for the insurgents, but today is mostly used to transfer men and material from Syria into Iraq as the head of the Haditha district pointed out. Babil is simply a target of opportunity as Jurf al-Sakhr is a Hashd base. The insurgents infiltrate fighters into the district about once a week to find targets. Finally, Baghdad was a major concern of the militants until the recent campaign. IS is currently a completely rural organization. To maintain its relevance and provide a threat to the government it must return to the cities. It launched two concerted efforts to move back into the capital, but during the new campaign it is concentrating upon its rural strongpoints.

Diyala is the main base for the Islamic State in Iraq with Kirkuk, Ninewa and Salahaddin being support areas. As usual Diyala witnessed the most attacks with 22. One checkpoint was attacked in the Muqaddam district in the center, there were two kidnappings of farmers in the Khanaqin district in the northeast, along with 3 gun battles and 5 fields being burned, four of which occurred in Khanaqin. The town of Mubarak also in Khanaqin was attacked and held for up to an hour before the insurgents left. Kirkuk had 5 incidents including the kidnapping of a sheikh and a sheikh’s son in two separate events, and a power tower was blown up. Ninewa witnessed 5 incidents as well made up of a shooting, some mortars being fired on a town, and three fields burned all in the Makhmour district in the south. Finally there were 6 incidents in Salahaddin. Recently IS has returned to the Tuz Kharmato district in the east and there were three incidents there during the week including a convoy hit by an IED and a farmer being kidnapped. A checkpoint was also attacked in the Baiji area and some infiltrators caught in the Samarra district. IS is becoming bolder in Diyala. On May 14 there were 7 incidents alone including the assault on Mubarak. The insurgents have access to every rural area of the governorate but have concentrated on the Jalawla-Khanaqin districts and Muqdadiya this month. In Kirkuk the militants are based in the south in the Hawija district were they were never routed from during the war. IS is back to burning fields in Diyala and southern Ninewa this spring, a tactic they began using last month. This is to both drive people out of these areas and force the remainder to pay taxes as well. Last, IS has returned to eastern Salahaddin as already noted. This was a favorite target before because of the divide between Arabs and Kurds there. It also has proximity to its bases in northern Diyala. The movement back to Tuz Kharmto also shows that the group is looking to expand once more marking another development in its rebuilding.

Baghdad Post, "A fighter wounded from the tribal crowd with sniper fire in eastern Diyala," 5/8/20

Rudaw, "Armed clashes with ISIS after its attack on two villages in Khanaqin," 5/14/20