Review Culture, History & Ideology in the Formation of Ba’thist Iraq, 1968-89 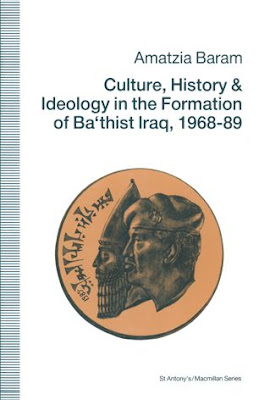 Culture, History & Ideology in the Formation of Ba’thist Iraq is a very short and concise history of the Baath Party’s move away from pan-Arabism to a new form of Iraqi nationalism that occurred after it took power for the second time. The Baath originally pushed a radical and revolutionary ideology of overthrowing Arab regimes and championed the Palestinians against Israel. A series of internal and external events however, changed it to focus upon securing its position within Iraq after the 1968 coup. University of Haifa’s Dr. Amatzia Baram provides a convincing argument for why this occurred and how it played out.


Immediately after the Baath came back into power in 1968 it carried out a dramatic about face in its ideology. Before Iraq was one of the most radical pan-Arab parties in the region. It advocated for overthrowing other Arab governments and the destruction of Israel. Several factors immediately led to a change in this stance however. First, Iraq stationed one-quarter of its army in Jordan to support the Palestinians which cost an unsustainable amount of money. Then in 1970 when the Jordanian government moved against the Palestinian Liberation Organization, Iraq did nothing. Afterward, Saddam Hussein said that Iraq had to focus upon itself. Second, the party wanted to resolve the long running Kurdish issue peacefully through negotiations. The Baath had to provide an accommodating ideology as a result since pan-Arabism had no appeal to a non-Arab people. Third, the government started a prolonged and violent struggle with the Shiite religious establishment. That increased after the Iranian Revolution and the subsequent Iran-Iraq War. Party leaders felt that Arab nationalism no longer had the appeal that it previously had and sought something different. Fourth, an internal power struggle within the Baath led to an anti-Syrian faction led by Saddam to ascend to the leadership dampening talk about uniting with Arab neighbors. Last, Baram barely mentions this but the Baath wanted to stay in power. It took part in the 1963 coup but was quickly ousted by the military. Now that it returned, it wanted to become permanent. Here Baram provides an important background for why the party was going to dramatically change its policies. The Baath was facing a combination of internal and external issues that led to a re-evaluation of its ideology. If it wasn’t going to champion the Palestinians or create a unified Arab nation, if it wanted to end the war with the Kurds, and appeal to the Shiite masses it had to come up with something new.

The result was a cultural campaign that championed the uniqueness of Iraq and its rich history. This started with the Education Ministry, and then a new National Folklore Troupe and the Mosul Spring Festival that promoted the traditions of different regions of the country. There was a move to preserve old Iraqi architecture. The Iraqi Fashion House talked about the different Iraqi attire from the various parts of the nation. There was a growth in archeology and the founding of various museums. The ruins of Babylon were rebuilt. Eight of Iraq’s provinces were renamed based upon ancient history. Ramadi for example became Anbar after an Abbasid Empire capital. Diwaniya was now Qadisiya after a famous battle where Arabs defeated the Persians in AD 635. Mosul was transformed into Ninewa after the Assyrians. Money and stamps used ancient scenes and figures. During the Iran-Iraq War Saddam was compared to Nebuchadnezzar. There was a precedent for this as well as during periods of the monarchy and the Qasim government, Iraq’s past was emphasized too. The point was to tie Iraqis to their history and argue that they were direct descendants of the people that started civilization. That Iraq was unique, and that was why it should be a leader in the region. The larger goal was to provide a cultural campaign that would appeal to Sunnis, Shiites and Kurds. There was not an emphasis upon being Arab for example, and all communities could be proud of this rich past. Baram goes through all the elements of this campaign from the festivals to writers and artists, and there is a picture section in the middle that highlights some of the sculptures, architecture and popular art that came out during this period.

Baram continued with his excellent history by pointing out the difficulties and changes this campaign faced. For one, Pan-Arabism considered history beginning with the Arab-Islamic period. This switch to pre-Islamic and pre-Arab times had to be justified. Some tried to overlook those issues, and just emphasized that Iraqis should be proud of their past. Others argued that Semitic people originated in Mesopotamia trying to link the past with the present Arabs. Another point was the attempt to reconcile with the Kurds failed and war broke out again, only to be crushed in 1975. Then during the Iran-Iraq War the Kurds joined Iran in the war, and then faced the Anfal campaign. All together that meant the government wasn’t as interested in appealing to the Kurds anymore. That didn’t mean the Kurds were ignored, there just wasn’t the urgency to directly address that community. Similarly, the government was going after the Shiite clergy while trying to make sure the wider Shiite population was loyal during the Iran-Iraq War. Finally, there was the issue of how the Baath could try to unite the country by pushing its diversity. How to balance the two was never resolved. The Baath policy was beset by these contradictions. That was especially apparent with the Kurds and Shiites that faced the political and military force of the state, while on the cultural and educational level were being courted. It could be argued for the Shiites at least that this campaign might have worked as the majority fought and died for the government during the war with Iran.

At just under 150 pages Culture, History & Ideology in the Formation of Ba’thist Iraq packs a lot of information. It is very readable and Baram covers a lot of territory. The Baath Party went through a dramatic transformation immediately after it took power and Baram provides reasons why it went in a new direction, how it carried out this new strategy, and the challenges it faced. The book does a great job of placing this policy within the larger context of Iraqi history as well. People always talk about how the differences in Iraq have been a historical hinderance. Few talk about this period when the government actually celebrated its different communities, its traditions, and attempted to create a new history connecting ancient Mesopotamia with the present. This came with a heavy dose of repression as well, but this was the first time this happened in a concerted and long running campaign, and Baram provides a great breakdown of why and how it happened.