Review The Future of Iraq, Dictatorship, Democracy, or Division? 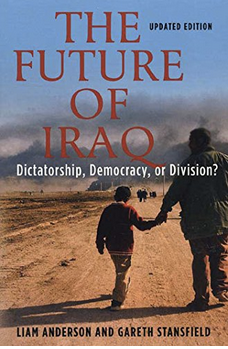 The Future of Iraq, Dictatorship, Democracy, or Division? by Liam Anderson and Gareth Stansfield is part history, part prescription for what the U.S. could do in Iraq. The history part is decent, but suffers from the western obsession with ethnosectarian divisions in Iraq arguing that has always kept the country from being unified. The second part predicted many of the problems the Americans faced during the occupation, but then becomes dated as it talks about democratization since it was originally written in 2003.


There are two main problems with The Future of Iraq. First, the introduction buys into the theory that the neoconservatives were the cause of the 2003 invasion. More importantly, it’s history is shaped by the idea that Iraq has always been split along ethnic and sectarian lines, a western trope about the country. Anderson and Stansfield wrote that the Bush administration’s goal in Iraq was to transform the Middle East and spread democracy as a means to undermine terrorism. While the president did promote democracy in the region, he was not a neoconservative. Rather, there were many different voices with different agendas behind the war. The neoconservatives in the White House were all mid-level officials rather than top ones with direct access to the president. When the book was written the neoconservatives were a popular focus in the United States, and that’s reflected in The Future of Iraq. Second, the thesis of the book is the well-worn Western idea that Kurds, Arabs, Shiites and Sunnis have always been divided. They base this upon the inclusion of the Ottoman province of Mosul, which included a large Kurdish population into an Arab state. Then how the British maintained the Sunni rule of the Ottomans over a Shiite majority, which was perpetuated by the following Iraqi regimes. The epilogue, which was written in 2005, talked about how the U.S. created a government with ethnosectarian quotas that reinforced the author’s argument. However their own history shows the problem with this idea. For example, it talks about how the Iraqi Communist Party was the largest organization in the country from the monarchy all the way to the Baathist period. The party appealed to all of Iraq’s different communities and was an ideological party rather than an ethnosectarian one. There were other major issues that also dominated the country such as British imperialism, pan-Arabism and Iraqi nationalism. The Baath party as well was not based upon identity politics. Like many western writers, Anderson and Stanfield seemed to believe the modern divisions in Iraq had always existed and that shaped their re-telling of its past.

On the positive side Anderson and Stansfield foresaw many of the issues that the United States would have trying to create a new Iraq. For instance, it asked if Sunnis would accept democracy because it would mean the loss of the privileges they accrued after years of running the state. They’d also heard a decade’s worth of anti-Shiite propaganda by the Saddam regime. Because they had so much to lose they would want Iraq to fail. The Americans also misinterpreted the desire of Shiites. Rather than being secular and reformist, religious exile parties came to the fore and demanded control of the state. Finally, they wrote that the central government and the Kurdish regional government would eventually come into conflict because Kurdistan would always want more autonomy and Baghdad would want more control. Last, it warned that the U.S. would only have one chance to build a democracy in Iraq, and that would depend upon how the population saw the occupation. The early mistakes and the emergence of the insurgency and Sadr rebellions showed that Washington would not have its way.

For a book written in 2003 in response to the up-coming U.S. invasion The Future of Iraq still has some merit. The problems the authors predicted for the American occupation mostly came true. The history also touches on the major topics of Iraq’s past. Given the shortcomings however of the focus upon ethnosectarian divisions and the discussion on how to build a democracy readers should probably look elsewhere for a discussion of Iraqi history and politics.