Review Hoodwinked, The Documents That Reveal How Bush Sold Us a War

Review Prados, John, Hoodwinked, The Documents That Reveal How Bush Sold Us a War, New York: The New Press, 2004 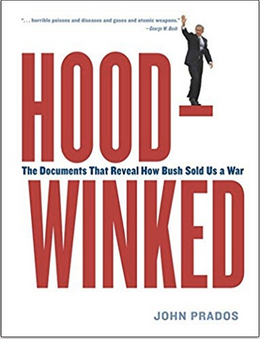 Like many books released immediately in the aftermath of the invasion of Iraq Hoodwinked, The Documents That Reveal How Bush Sold Us a War focuses upon the case the Bush administration made to justify war rather than why it happened. The 2002 National Intelligence Estimate on Iraq, President Bush’s 2003 State of the Union, Secretary of State Colin Powell’s address to the United Nations and other speeches and documents are all analyzed to explain the public campaign the White House launched in the run up to the conflict. The problems with U.S. intelligence and the arguments for war are emphasized. Despite lots of information on those topics coming out after the book was published, Hoodwinked is still a good starting point to understand how the White House sold the invasion.


Author John Prados starts the book by saying that the reasons for the Iraq war were not those given to the public. America’s claims that Iraq was a threat due to its WMD and connections to Al Qaeda were made to create support for the overthrow of Saddam Hussein, and that’s what Hoodwinked focuses upon. Unfortunately, there is nothing on Prados’ opening statement on why President Bush wanted to invade. This was a failing of all too many books that came out right after the invasion. It seemed like writers were caught up in how Washington’s arguments proved all wrong, and didn’t have the time to think about the bigger picture of its causes. This is a major flaw with Hoodwinked and other releases from this period.

That being said Prados does a great job going through the information campaign the Bush administration used to convince Congress and the American public of the need to depose Saddam. The author uses three means to achieve that. First, there are chapters starting in the fall of 2002 that go step by step over the White House’s arguments from Iraq trying to buy aluminum tubes for centrifuges to build a nuclear bomb to the story that Iraq and Al Qaeda had a long time relationship. Then a document such as the 2002 CIA White Paper, which was a public summary of the National Intelligence Estimate on Iraq is reproduced in full, and then there is an analysis and critique of it. The White Paper for instance, said that Iraq had restarted its nuclear program and had a map of all the facilities involved in that. The problem was the U.S. had no concrete information about any of those places since the U.N. inspections ended in the 1990s. Just as important when the inspections re-started in 2002 they went to every one of those plants and found nothing. The Ash Sharqat facilities was supposed to be working on separating enriched uranium. The Defense Intelligence Agency’s evidence that it was being used again was new security fences and access roads. U.S. intelligence even had contradictory reports. The Qaim facility was said to be a chemical facility, not a nuclear one by the DIA in 2002, and was inspected in December 2002, and nothing was found. The Tarmiya plant used electromagnets to separate enriched uranium, but was heavily bombed during the Gulf War. In 1995, Saddam’s son-in-law Hussein Kamal defected to Jordan and said that all the material from Tarmiya was removed and buried. The U.N. went there in December 2002 and found it destroyed. The U.S. had satellite photos of new construction at the Al Furat facility, but when inspectors visited there was no nuclear equipment there. That was what most American intelligence was like, suspicious activity on the outside, but nothing on what was happening on the inside. The administration dismissed the United Nations’ findings believing that Saddam was hiding his programs just like he tried to do in the 90s. This provides a scathing review of the shallow intelligence the U.S. had about Iraq, which was used as a basis for the war. That was why Prados called the book Hoodwinked because he believed the White House exaggerated and deceived the public to convince it of a war of choice against a threat that didn’t exist.

The book also covers the immediate postwar period when the U.S.’s argument came apart. No weapons were found, the administration’s campaign was exposed, and most importantly it never admitted that it was wrong. When no WMD stocks were discovered for instance, the White House changed its arguments that Iraq had programs, and then finally that Saddam wanted to have WMD in the future, and thus the war was justified. No one was held responsible, and the Americans became caught up in the U.S. occupation of Iraq and fighting the insurgency. Prados blames Bush and his cabinet one by one for their role in this fiasco. This critique would have been better if it had covered the motivations for the war, but as stated before, that is not covered. Since so much information came out about how wrong the U.S. was about Iraq as soon as the invasion was over, it seemed to consume many writers, and Prados was no exception. His strength was his ability to go through point by point what was wrong with the run up to the war. His weakness was not putting it into a larger context of why it happened.