Review Iraq Under Siege, The Deadly Impact of Sanctions and War 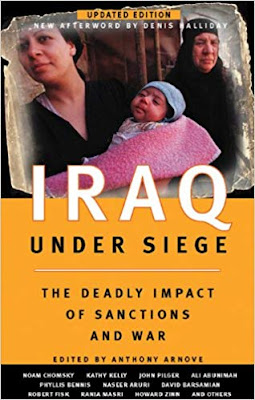 Iraq Under Siege, The Deadly Impact of Sanctions and War was written by western activists who were against the sanctions imposed on Iraq for the invasion of Kuwait. The economic isolation of Iraq was supposed to encourage it to exit its neighbor territory, but then became a means to punish and contain it. As Clinton administration officials said, the sanctions would remain until Saddam Hussein was out of office. While some of the chapters in this anthology deal with the effects of sanctions upon Iraqis, most are leftist essays against American imperialism.


The first part of Iraq Under Siege focuses upon criticism of U.S. foreign policy. There’s talk about American imperialism, that the first Bush administration was only interested in Iraq’s oil, that Washington wanted to protect Israel, that the U.S. wanted to be the hegemon in the Middle East, etc. Many of these pieces can’t stay focused upon Iraq, and some go completely off the rails. One by Noam Chomsky for example, said that most oil producing countries don’t have large populations because the rich and oil companies want to take all the profits, so the goal of the sanctions was to cut down the number of Iraqis so that it might be more easily controlled in the future. These are meant to explain why the United States maintained sanctions on Iraq, but fail because they are leftist diatribes full of stereotypes and tropes against America foreign policy. There is no serious analysis provided.

In the middle of the book there are some chapters that actually deal with the sanctions. One was by journalist John Pilger who went to Iraq and reported upon the humanitarian situation. The best was by Barbara Nimri Aziz about an Iraqi intellectual family and the sacrifices and losses they went through in the 90s. These are far better because they are by people with actual experience in Iraq. The 90s were a very difficult time for the country as its infrastructure had been destroyed during the Gulf War, and the sanctions caused huge distress. The middle section highlights many of these problems.

The sanctions period was a very important period in Iraqi history that needs serious discussion and commentary. Iraq Under Siege does not provide that. Most of the book reads like one opinion piece after another describing how bad the U.S. was and calling for activism to end the sanctions. The few chapters that actually focus upon Iraq can’t save this book.