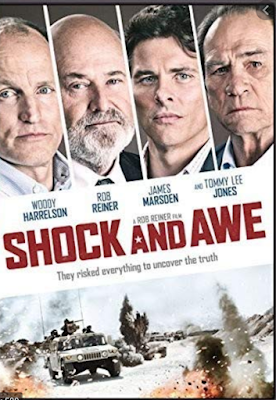 Shock and Awe derives its title from the bombing campaign that opened the U.S. invasion of Iraq in 2003. The event was greatly oversold as a massive series of air strikes when in actuality it was very limited and short lived. The movie takes that to describe the propaganda campaign the Bush administration launched in 2002 to sell the Iraq war to the American public. This film, produced and directed by Rob Reiner, focuses upon two real life reporters at Knight Ridder new service, Jonathan Landay (Woody Harrelson) and Warren Strobel (James Marsden) who were some of the few who actually investigated the White House’s claims about Iraq and found many problems. They were largely overlooked as the vast majority of the American media simply repeated what the government said with very little comment which is what the movie attempts to portray.


The film uses a bunch of made up sources to convey many of the actual events and even phrases that were used in the run up to the invasion For example, Landay and Strobel hear that on 9/11 Defense Secretary Donald Rumsfeld and many neoconservatives were talking about hitting Saddam Hussein because they didn’t think that bin Laden could have worked alone. Then sources tell them the Pentagon created its own intelligence unit to create ties between Iraq and al Qaeda. The story delves into things like the charge that Iraq tried to buy tubes for centrifuges to enrich uranium for a nuclear bomb, which intelligence analysts tell the two reporters that wasn’t true. It also talked about how the White House leaked stories to the New York Times and then used those reports as proof of its argument. That’s all backed up by the use of actual news clips from the time. In the process, it not only lays out the information campaign launched by the White House, but how reporting works. It’s about making phone calls, checking on sources, interviewing people, having your work edited, etc.

Of course this is Hollywood so they do take liberties. They weren’t happy with a Woodward and Bernstein All the President’s Men type story. They threw in a romance with Jessica Biel and Landay and Strobel getting self-righteous in a meeting with the Iraqi National Congress head Ahmed Chalabi.

One point Shock and Awe gets wrong is when they claim Cheney was lying about Iraq and its WMD. This is an oft made charge by opponents of the war, but several investigations about American intelligence show that while the White House might have presented everything as proven fact without all the qualifications and used some stories it shouldn’t have the CIA and others all believed Iraq had weapons and were producing them.

Shock and Awe does an effective job presenting the work of Knight Ridder and their reporting which turned out to be on point about Iraq. The problems with the film like the Jessica Biel character can be overlooked for the overall story. It does a good job hitting on a bunch of different claims the Bush administration made without getting caught up in all the details. It’s also a critique of the media with the major outlets like the New York Times, ABC and Fox relying upon their access to top administration officials for their reporting. That means they repeat what the White House is pushing and then present it to the public with very little criticism or outside sourcing thus advancing the president’s agenda rather than providing the public with all the information they should have in a democracy.