Review Surge, My Journey with General David Petraeus and the Remaking of the Iraq War

Mansoor, Peter, Surge, My Journey with General David Petraeus and the Remaking of the Iraq War, New Haven and London: Yale University Press, 2013 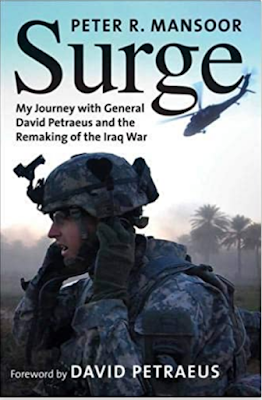 Peter Mansoor wanted to write an insider’s view of The Surge. He was more than qualified as he was the executive officer to General David Petraeus the commander of the new American strategy. The result was Surge, My Journey with General David Petraeus and the Remaking of the Iraq War. It gets off to a slow start as there is too much on American personnel, organization, etc. It picks up when the Surge actually starts. Mansoor’s thesis is that the Surge came at the right time and wouldn’t have worked earlier because the conditions were not right.


Mansoor lays out the main elements of the Surge. First, inside Baghdad combat outposts with U.S. and Iraqi forces would be set up in neighborhoods with the goal of protecting the population and denying space to the militants. Blast walls were erected to limit movement, special forces targeted leadership cadres and bases, and there was an outreach to groups that were considered reconcilable. General Petraeus also took advantage of the Anbar Awakening helping it spread from Ramadi to all of Anbar and eventually basing the Sahwa off of it where tribes and insurgents turned on the Islamic State of Iraq. This was the result of a sea change in the minds of Sunnis who realized they were losing the civil war with the Shiites, and decided the Americans were the lesser of evils. This became part of a plan to push local reconciliation with the hopes that could be linked to Baghdad and a national effort. There was also an information campaign aimed at both the Iraqi and U.S. publics to highlight the successes of the new strategy. Finally, there was a diplomatic push to get the Iraqi government to pass a series of benchmark laws. This was a result of President Bush finally realizing that the U.S. was losing the Iraq war. Before he was disconnected from events on the ground and the previous strategy was based upon handing off security to the Iraqis and then withdrawing. There was no thought on winning the war. Mansoor argues that the Surge was more than just a change in strategy but a mindset for the U.S. forces. It was also not a hearts and minds campaign. As he lays out the Surge was more than just protecting the population and included plenty of military operations as well. It also came at just the right time when Sunnis were changing their minds about the war and were open to working with the Americans instead of fighting them.

Surge also goes through the problems the Americans encountered. One of those was back in Washington where not only the Democratic controlled Congress but the head of the Central Command Admiral William Fallon wanted a withdrawal. There’s a whole in depth chapter on Petraeus and Ambassador Ryan Crocker’s testimony to the House and Senate in September 2007, which was a crucial moment to present the Surge to politicians. That section drags as Mansoor goes through almost every major Senator and Congressperson that asked questions. Another was with the Maliki government which Mansoor characterized as dysfunctional, sectarian, and most concerned with consolidating power in the prime minister’s hands. It put up all kinds of roadblocks to integrating the Sahwa for example which Petraeus was hoping would be part of a reconciliation process. In the conclusion, the author notes that the Sahwa were ultimately left on their own. Mansoor could have spent more time on these issues because many of them lasted past the two years of the Surge and had a far bigger impact on the country. Maliki became an autocrat for example, and his rejection of the Sahwa was exploited by the insurgency to make a comeback. Unfortunately Mansoor is focused upon the successes far more than the failures of the U.S. strategy.

The Surge succeeds in providing the insides and outs of how the Surge was formulated and implemented. It shows that the policy was not just about sending more troops or winning over the Iraqis but a multi-faceted strategy. Petraeus was also open to changes going on within Iraq such as the Awakening. While it mentions the difficulties the U.S. faced it is much more about the victories. That could be expected from an American officer so intimately involved. That means while the book adds many details it should be read with others to gain a full understanding of the complete context of this period.