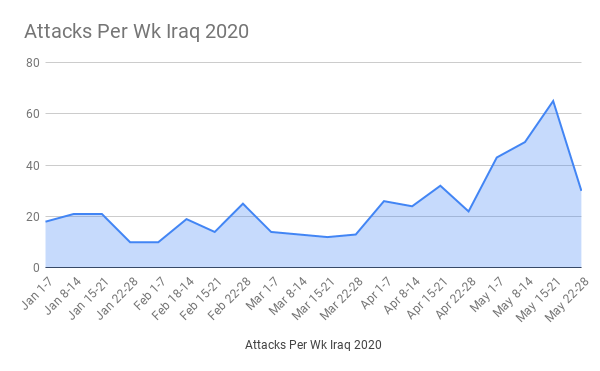 In April 2020 the Islamic State started its annual spring-summer offensive. Attacks went up to the highest amount since the same time in 2018. The fourth week of May however violence has gone back down. That raises the question of whether this is just a temporary dip or does IS have finite resources at the time and can only sustain a high number of operations for two months?

There were 30 incidents reported in Iraq in the fourth week of May. That was down from 65 the week before, and the lowest amount since 22 the fourth week of April. There were 10 incidents in Diyala, 8 in Kirkuk, 3 in Anbar and Salahaddin, and 2 in Babil, Baghdad, and Ninewa each. The current offensive started the first week of April. There was a temporary dip that fourth week of April, but otherwise incidents have consistently gone up. The drop in violence in the fourth week of April could be another temporary event or it could mark the end of this year’s offensive. That can’t be determined until more time passes. Last year’s campaign also started in April, went down in June, then went back up in August and September before it stopped. The 2019 campaign averaged 104.8 incidents per month compared to 169.1 per month in 2018. So far, this year’s offensive has averaged 148.0 incidents per month. It will be interesting to see what this year will be like as a measurement of the Islamic State’s rebuilding. Since 2019 its main priority has been to preserve its leadership and rebuild its cadres rather than carry out attacks. If this year’s offensive has more incidents it could mean it’s moving back into operations.

There were 30 casualties during the week, the fewest since the fourth week of March. 9 people died made up of 4 civilians and 5 members of the Iraqi Security Forces (ISF). 21 were injured including 4 Hashd al-Shaabi, 5 civilians, and 12 ISF. Diyala had the most casualties with 10 followed by 8 in Kirkuk. Like most of the previous weeks since April IS has targeted the security forces more than civilians.

Anbar has been secondary to the Islamic State for quite some time. There were 3 incidents there during the week. One was an attack upon a checkpoint in Akashat in the west towards Jordan, another occurred during a security sweep in Garma in the east where a group of three IS fighters was discovered leading to a short gun battle before they were killed. Finally, a car bomb was found south of Fallujah and defused. The province is mainly being used to move men and material in from Syria especially after it lost its last piece of territory there last year. Attacks only occur there occasionally as a result.

Babil and Baghdad have been included in the new campaign. There were two more incidents in northeast Babil’s Jurf al-Sakhr district. Some insurgents infiltrated into the district and got into a shootout while an IED wounded a Hashd member. In the capital governorate a grenade wounded a family of five in Husseiniya in the north and a checkpoint was assaulted in Yusifiya in the south. For the month, there have been 7 attacks so far in Babil, the most since 8 last August during 2019’s offensive. Almost every attack is in Jurf al-Sakhr because it is a Hashd base providing plenty of targets. Likewise, there have been 13 incidents so far in Baghdad in May when there were none in April and 7 in March. That could point to IS attempting to move back into the capital for the third time since the start of last year. The militants have been working on their networks into the capital but have shown no ability to sustain their effort.

The main targets of the Islamic State this spring have been Diyala, Kirkuk, Ninewa and Salahaddin. Diyala as usual, had the most attacks with 10 in the 4th week of May. Two checkpoints were shot at, two fields were burned, and there were two kidnappings as well. All but one of those incidents took place along a diagonal axis from the center of the governorate out to the Jalalwla and Khanaqin districts in the northeast corner by the Iranian-Kurdistan borders. IS has access to all the rural areas of the province, but this is where they have been focused upon for the last several weeks. There are continued reports of empty villages in these areas, which are being used as bases to launch further attacks. The security forces are constantly combing through these sections, but they only last a few days and have had no visible impact upon IS. Kirkuk saw 8 incidents including an attack upon a refinery, two kidnappings, 3 fields burned, and one attempt foiled. All IS activity occurs in the south where the group was never expelled and has been able to quickly rebuild as a result. Ninewa just had two incidents. One was an IED that set off a fire in a field and the other was a pair of IEDs that hit a police convoy. Both of these incidents happened in the south. IS also has cells in the west, but like Anbar those appear to be focused upon bringing in people and material in from Syria. Salahaddin saw three incidents, an assault on a checkpoint, and two infiltration tries. There have been 27 incidents in the province so far this month, which is the most since June 2018.

AIN, "The Hashd forces repelled an infiltration by ISIS groups in Tal Hasiba area of Salahaddin," 5/22/20

Baghdad Post, "A member of the Hashd militia was wounded by an explosive device, north of Hilla," 5/27/20

- “Tribal crowd warns of the increasing threat of ISIS terrorists in Diyala,” 5/25/20

Iraq Newspaper, "The ISIS terrorists executed kidnapped man in Jalawla and sent the video to his family," 5/25/20

- "Killing and wounding 6 police in Mosul by ISIS terrorist fire and the US defense secretary warns Iraq," 5/28/20

Al Maalomah, "Deactivate a booby-trapped vehicle during a raid south of Fallujah," 5/24/20

- "Diyala Civil Defense announces the fall of the first martyr due to ISIS fires," 5/24/20

- "A former government official warns of the birth of a sleeping emirate at the southern Diyala gate," 5/23/20

- "The popular crowd thwarts an infiltration attempt by ISIS remnants in Jurf al-Nasr," 5/22/20

- "The popular crowd thwarts an infiltration attempt by ISIS west of Samarra," 5/24/20

- "Without becoming ash…ISIS burns wheat fields for fourth time in a row in Diyala," 5/24/20

- "Four security elements killed and wounded, with an armed attack on a local refinery, north of Kirkuk," 5/22/20

- "One soldier was killed and another one wounded in an armed attack by ISIS, south of Baghdad," 5/27/20

- "A Terrorist, Tried To Burn Agricultural Crops, Arrested In Al-Zab District Of Kirkuk," 5/27/20

- "Two brothers have been kidnapped in mysterious circumstances, in a village North-East of Baquba," 5/27/20

- "Two policemen were wounded in an ISIS attack northeast of Baquba," 5/22/20

Al Sumaria, "Five members of one family were injured in a hand grenade explosion, north of Baghdad," 5/24/20