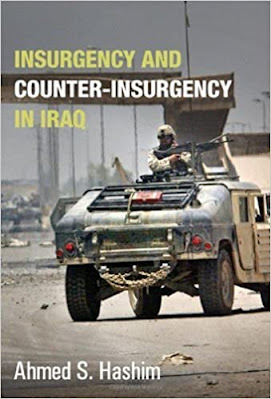 Insurgency and Counter-Insurgency In Iraq might be the best introduction to the subject. Ahmed Hashim worked in Iraq two times in 2003-04 and 2005 advising the U.S. military. He also did extensive research with dozens of quotes by Iraqis on the resistance to the U.S. occupation. While he covered the goals, organization, tactics and U.S. response to the insurgency, he might have done his best work on what caused it focusing upon Sunni grievances.


Hashim wrote that Sunnis joined the insurgency for many reasons from nationalism to honor to revenge to pride to religion, but to him the loss of identity was the most important. When the British created Iraq in the wake of World War I they gave power to the Sunni community even though it was a minority. For the following decades Sunnis came to believe that their interests were the interests of Iraq. The 2003 invasion destroyed that system and threatened their world view as well. They lost their status, their privilege, and believed that the Americans, the Shiites and Kurds were marginalizing them. Decades of Baathist propaganda and the rise of Salafism in the 1990s also made many Sunnis look down on Shiites and when they took over the state in 2005 it increased the identity crisis. Despite all that not all Sunnis immediately opposed the U.S. occupation. The majority took a wait and see approach. Hashim believed that the Coalition Provisional Authority could have co-opted the community, but instead not only ignored it, but instituted policies such as disbanding the military that made Sunnis feel like victims. The author makes a convincing case that this list of grievances that started right after the overthrow of Saddam are the main factors and those can still be found at work to the present day.

There’s also a section on how U.S. strategy failed, which is still relevant today because the Iraqi security forces are largely doing the same thing today. The Americans did things like failing to rebuild Iraq and restore services. It never dealt with the militias which challenged the state’s authority. It struggled to create an effective police and army. It carried out mass arrests which enraged Sunnis and short term security sweeps which allowed the militants to leave when they started and return when they ended. Many of these are still apparent in Iraq. Baghdad had no policy for rebuilding war ravaged areas in 2017 and many of those places still have destroyed and damaged housing and poor services. There are still militias in the form of the Hashd al-Shaabi who have even more power today than when Hashim wrote his book, and the army and police still face institutional problems. Finally the authorities still rely upon large security operations which only secure an area as long as forces are there and then the insurgents return afterward.

Where the book goes off track a bit is a chapter on identity politics in post-03 Iraq. It goes into the split between Sunnis and Shiites, whether the Kurds wanted to be independent from Iraq or no, etc. Reading the book today that’s really unnecessary to explain the insurgency, especially because he didn’t relate much of it to that topic. However, since the book was written in 2005 when many had little in depth knowledge of Iraq it was probably considered necessary.

If you want to get a good understanding of the origins of the Iraqi insurgency and why it still continues to this day there might not be a better source than Insurgency and Counter-Insurgency In Iraq. The insights into Sunni grievances is the highlight and the endless quotes by Iraqis support Hashim’s main points. The fact that it was written in 2005 and still stands up to today shows how spot on the author’s research and arguments were.