Islamic State Offensive In Iraq Takes Off In May

In April, the Islamic State began its annual spring-summer offensive. That month there were 109 incidents by the insurgency. IS took things to a new level in May with 194 incidents, the most since 239 in March 2018. The campaign has been focused upon establishing military control of the rural areas of central and northeast Diyala, southern Kirkuk, and Salahaddin with harassing attacks in Babil, Baghdad, Irbil, and Ninewa.

There were a total of 196 security incidents reported in the press in May. 2 of those were pro-Iran groups firing rockets at the Baghdad International Airport and the Green Zone. That left 194 incidents by the Islamic State with 71 in Diyala, 36 in Kirkuk, 29 in Salahaddin, 17 in Anbar, 14 in Baghdad and Ninewa each, 7 in Babil and 6 in Irbil.

There were 305 casualties during the month. 125 people died including 1 Peshmerga, 31 civilians, 40 Hashd al-Shaabi and 53 Iraqi Security Forces (ISF). Another 180 were wounded with 40 Hashd, 59 civilians and 81 ISF being injured. Diyala, which is the most violent province in Iraq led the nation with 126 casualties. 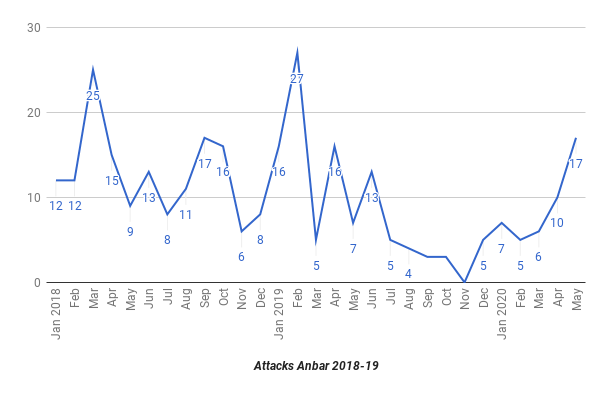 Attacks in Anbar had been relatively low since the summer of 2018, but that changed in May. There were 17 incidents that month up from 10 in April, 6 in March, and 5 in February. That was the most incidents since 27 in February 2018. The province has mostly been used to move in men from Syria after the Islamic State lost its last piece of territory there last year. Only 6 of the incidents however were actual attacks. The other 11 were militants being caught trying to infiltrate into an area or found in security sweeps along with 3 car bombs that were discovered and defused. That points to Anbar no longer being a center for the insurgency like it used to be. 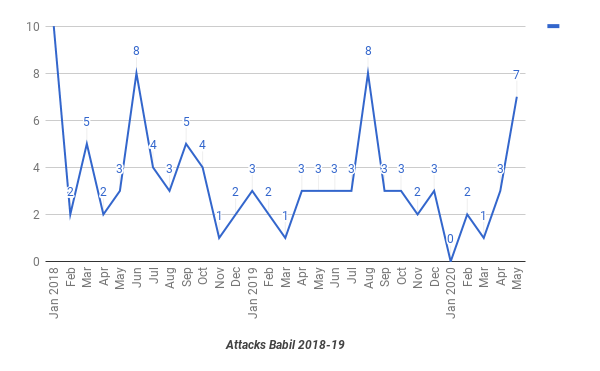 There were 7 incidents in Babil. That was the most since 8 in August 2019. All of the attacks were in the Jurf al-Sakhr district in the northeast. This area was emptied of civilians by the security forces and then turned into a large base for Kataib Hezbollah. That’s the main reason why IS hits the area because it is full of targets. Outside of the annual spring-summer offensive however the militants have tended to leave the governorate alone. 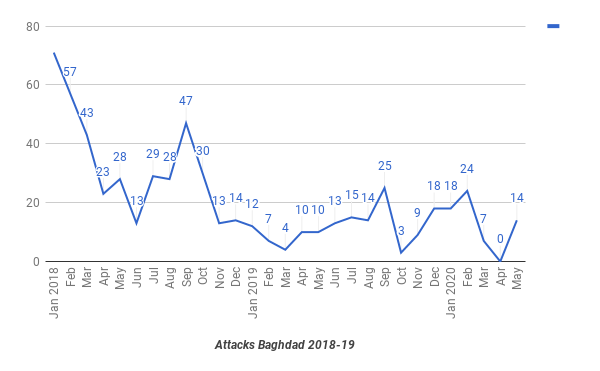 May marks the third time in the last year that the insurgents have attempted to move back into Baghdad. There were 14 incidents during the month up from 0 the month before. Last April IS slowly began creeping back into the capital with 10 incidents rising to 25 by September before they fell off because protests against the government started the next month and IS has stopped many of its operations during the demonstrations since they are opposed to the government. Then the Islamic State started all over again reaching 24 incidents in February 2020 before falling off once more. It’s apparent that the insurgents are trying to rebuild their cells in the Baghdad belts which are the out laying towns in the north south and west such as Tarmiya and Yusifiya. From there it has tried to hit the city itself. Each month it has been able to set off a series of IEDs on one day inside the city. That happened on May 10 with three bombs. This effort is still a work in progress as shown by the inability of the group to maintain any progress. 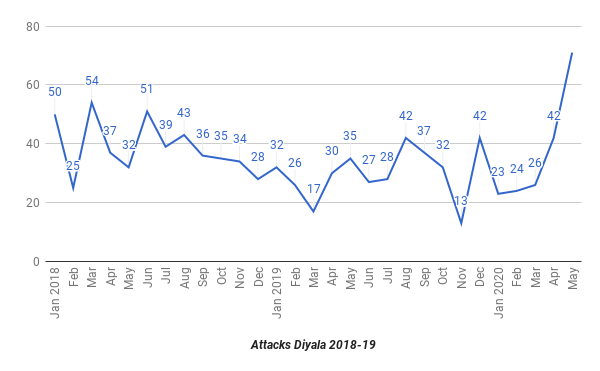 Diyala is the center of the insurgency in Iraq. The new offensive has concentrated IS’s operations there. Before the group would hit all over the province with most occurring in the Khanaqin district in the northeast by the Iranian-Kurdistan border. Now they have moved into the center into the Muqdadiya district. There were 71 incidents during the month, the most since August 2014. That included 1 attack upon a mukhtar, 3 towns attacked, 5 kidnappings, 8 gun battles, 9 assaults on checkpoints, and 14 fields burned. IS started attacking farms last year as a way to force people out of rural villages and enforce taxes. For several months now local officials have been warning that the militants are driving the population out of Khanaqin and Muqdadiya. That allows IS to operate unhindered and without worrying about anyone providing intelligence on their activities to the authorities. The militants can then set up bases and launch more operations from them. IS is now attempting to drive the security forces out of these two districts as seen by the fact that 16 Hashd and 23 ISF were killed out of 57 total and another 21 Hashd and 21 ISF were wounded out of 69 injured overall. The Islamic State never seized any territory in Diyala during the war. That meant it never had to switch out of an insurgency and has continued with its operations there ever since. 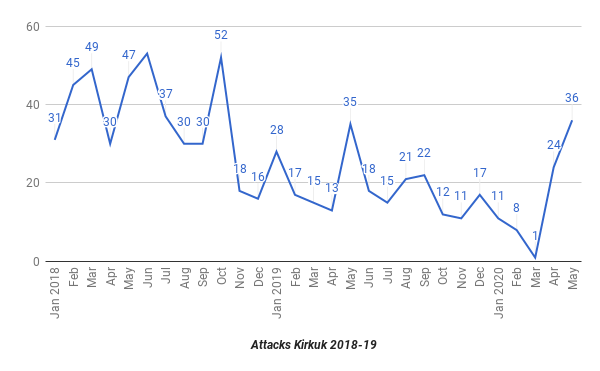 Kirkuk had the second most incidents during the month with 36. That was the most since 52 in October 2018. There were very few casualties in May with just 14 dead and 7 injured. Like Diyala 20 of those were members of the security forces. Part of that was the fact that 10 of the incidents were farms being set afire. Another 3 were electricity towers being blown up, along with a thermal camera installation. There were also four kidnappings. That left 18 attacks on civilians and the security forces. All of these incidents occur in the south and southeast in the Hawija and Daquq districts. Those two areas were never really cleared during the war because the militants slipped away rather than fight. They have since returned. 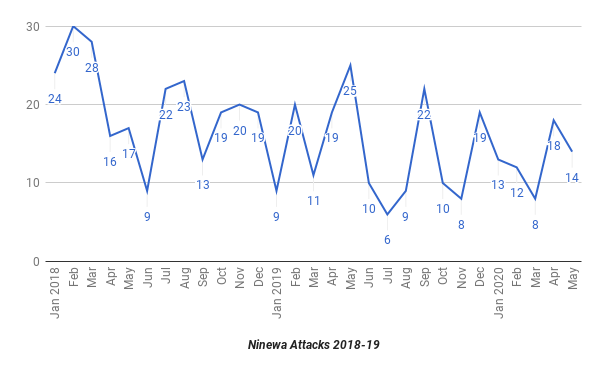 Ninewa was the only province where incidents went down from the month before. In April there were 18 dropping slightly to 14 in May. IS is carrying out two different activities in the governorate. The militants have shut down almost all their operations in the west to try to not draw attention to their smuggling in men from Syria. This is similar to what is happening in Anbar. In the south however, IS has picked up its attacks. Again, this is aimed at the security forces accounting for 15 of the 21 casualties. Incidents are still at a relatively low level and have constantly fluctuated since 2018. 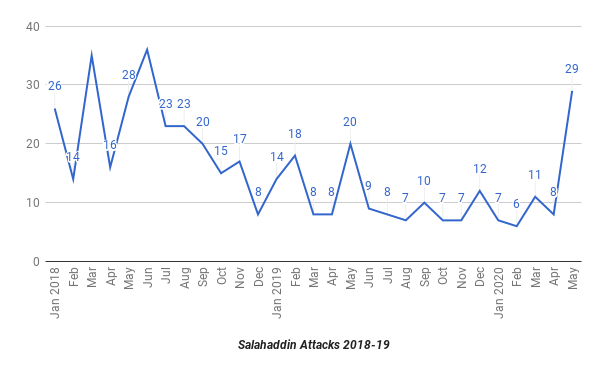 Finally, Salahaddin saw the second largest jump in IS operations in May. There were 29 incidents the most since 36 in June 2018. That included 2 fields burned, 2 kidnappings, 5 shootings at checkpoints, and 9 gun battles. These incidents occurred in three main areas during the month, Samarra in the center, Tuz Kharmato in the east, and Dujail in the south. The militants have attacked Samarra and Dujail before but moved back into Tuz this month. That was a favorite district before because it is split between Arabs and Kurds. Again, 64 of the 71 casualties were from the ISF and Hashd.

The last area hit by IS was the Makhmour district in southern Irbil. All six incidents were farms being burned. This appears to be an instance of the insurgents feeling out new areas to test security. Obviously there are many holes in that district which IS has discovered.

Violence By Province May 2020