Review What Happened, Inside the Bush White House and Washington’s Culture of Deception 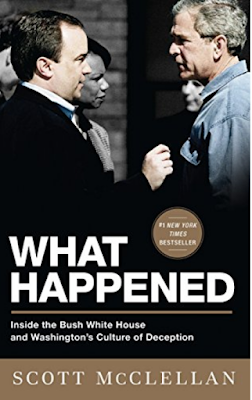 Scott McClellan was the White House spokesman from 2003-2006. He was a Texan who helped with George Bush’s presidential campaign in 2000, was the deputy White House Press Secretary, and then took over that position in May 2003. He originally believed Bush’s campaign promise that he would change the culture in Washington D.C., but he was completely disappointed. His book What Happened, Inside the Bush White House and Washington’s Culture of Deception was a criticism of what he felt went wrong with the Bush presidency. He wrote that Bush was not truthful with the public, was incapable of changing his mind after he made a decision and approached everything like it was a political campaign where winning the debate was the only thing that mattered.


McClellan spent a long time in politics and believed that the system in Washington D.C. was broken. He read a book that outlined the idea of the permanent campaign which he came to believe plagued both political parties. That’s the strategy that focuses upon manipulating public opinion to win support for an issue. It leads to things like introducing bills that are never meant to pass but to just gain headlines in the media or to make the other side look bad. It’s also about manipulating the debate rather than being truthful. It has led to a political culture where politics is war and destroying the other side is the paramount goal rather than compromising. Bush campaigned on being an outsider from Washington D.C. who would clean up the politics after all the scandals President Clinton went through. McClellan wrote that instead he embraced the permanent campaign. This idea shapes the entire book. McClellan uses it to explain everything from how the administration approached the War on Terror to most importantly how it dealt with Iraq. It’s hard to disagree with the author as you see this tactic being used all the time in American politics. It’s what also led McClellan to ultimately lose faith in the vision President Bush promoted.

The Iraq War was the primary example of the ultimate campaign. The author believed that the real reasons why Bush wanted to overthrow Saddam was to create a democracy and transform the Middle East. That was barely talked about because it would not convince the public of the necessity to go to war. Instead, the White House chose weapons of mass destruction (WMD) and Iraq’s alleged ties to Al Qaeda, something that would sell to the American public after 9/11. These issues were simplified and presented as truths when many of them were questionable and some proved to be false. There was no debate over whether the war was right or wrong, what the possible costs were or what would happen afterward, because again, those would not win the debate. The added irony was that they were barely talked about within the administration either because it was so focused upon starting the war. When no WMD or connections to Al Qaeda were found after the fall of Saddam they were never fully acknowledged by the White House because it was still intent upon selling the war no matter what. Bush’s credibility was hurt as a result and would decline even more when the occupation went wrong. McClellan uses this as an example of how the permanent campaign was bad for American politics. When it came to war and peace he argued that an honest debate would have best served the country, but that never happened. Everything was set upon having the invasion and nothing else mattered even after it was over. This was why figures like Vice President Dick Cheney kept on talking about Iraq’s involvement in 9/11 after those stories were proved false. It was why officials kept talking about WMD even after none were found after the war. Even when the administration was found to be wrong, it couldn’t admit it because it was committed to the campaign to sell the war. Again, this was what McClellan found to be wrong with American politics.

What Happened also delves into McClellan’s thoughts on Bush as president. McClellan was from Texas and became a fan of Bush when he was the state’s governor. Iraq however revealed the president’s worse characteristics. Bush didn’t believe in accountability hence no one was ever held responsible for any of the problems with the war. Most importantly he was stubborn and refused to change his mind after he made a decision. That’s why he was never able to admit to anything ever going wrong. He insisted that Saddam was a threat and that invasion was right. McClellan thought this cost Bush not only his standing, but meant he was never able to find a solution to Iraq. Many Iraq histories have commented on how Bush was disconnected from reality on the war. The country descended into civil war by 2006 the U.S. had no strategy and yet Bush was confident that the U.S. was winning. McClellan explains this was a result of Bush’s personality. He truly believed he was right no matter what.

McClellan reveals a lot about why the Bush administration went wrong. He believed that Bush’s personality along with the permanent campaign was the worst of both worlds. A stubborn president and a political strategy obsessed with winning meant when things went awry like in Iraq the White House wouldn’t admit to any problems, dug itself deeper into a hole, and ultimately lost the faith of the public. This explains the politics surrounding the Iraq War so much. It’s also a convincing argument about what’s wrong with American government today. McClellan wrote his book in part to tell the public about the country’s troubles from his own experience working in Washington D.C. with the hopes that it could bring about some change, but unfortunately it didn’t. It does however give an insider’s view of how the Bush White House operated.