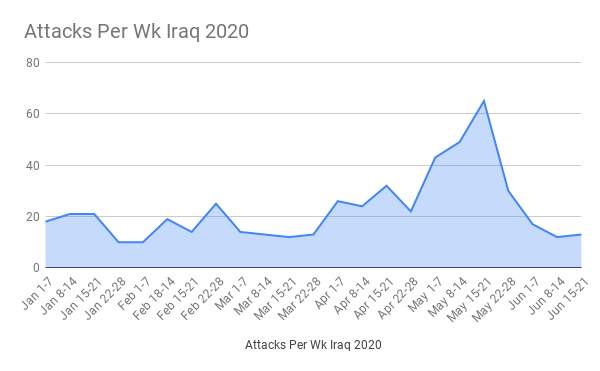 Violence in Iraq has returned to a very low level. For the third week in a row incidents were only in the teens. This came after the Islamic State announced a new offensive in April-May where attacks went up to 2018 levels. The government has also been launching an aggressive series of security sweeps which have also kept insurgent operations down.

From June 15-21 there were just 16 security incidents reported in the media. That was the same number from the week before. 2 of those incidents were pro-Iran groups firing rockets at targets in Baghdad that housed Americans, plus a third where rockets were discovered before they were launched. These types of attacks have been renewed as the Iraqi government has entered talks with the United States over a new security agreement. Tehran is trying to send the message that the Americans can be targeted at any time and that they should leave the country. That left 13 incidents likely by IS versus 12 the week before, and 17 the first week of June.

Incidents were distributed across just five provinces, 1 in Kirkuk, 4 in Baghdad and Diyala each, 2 in Ninewa, and 5 in Salahaddin.

Those led to 11 deaths and 19 wounded. 1 civilian, 4 Iraqi Security Forces (ISF), and 6 Hashd al-Shaabi lost their lives with another 5 ISF, 7 civilians, and 7 Hashd being injured. Salahaddin had the most casualties with 19, followed by 6 in Diyala, 4 in Ninewa, and 1 in Baghdad. Although casualties were low the security forces suffered more than civilians which has been a decided change over the last two months. It appears IS is attempting to intimidate and establish military superiority over the rural areas they operate in by going after the police, army, and Hashd.

Since the Islamic State lost its last bit of territory in Syria last year it has been moving in men and material from the country into Iraq largely via Anbar. In response the government has constant security operations in the large uninhabited areas of the province. There were seven during the week going through the desert areas, the border, and the Hit district.

Besides the three rocket incidents a lawyer was also assassinated in Tarmiya, a town in northern Baghdad province. This has been a main hub of militant activity for years.

Diyala had four incidents during the week. An army patrol was hit by an IED, a group of civilians were attacked, and an IS sniper killed a Hashd and wounded a soldier all in the Muqdadiya district in the center. An infiltration attempt was foiled in the Khanaqin district in the northeast. This province is the center of IS activity in Iraq which is why it regularly has a high number of incidents.

3 people who’d been kidnapped weeks before were rescued by the security forces in a village in the Daquq district in southern Kirkuk. IS was never expelled from the southern region of the governorate which is why almost all incidents occur there.

There were two IEDs in Ninewa targeting civilians. That led to four wounded total. Both occurred in the Qayara district south of Mosul. IS is also using western Ninewa to smuggle in people from Syria. Most attacks now occur in the south in places like Qayara.

Salahaddin was the most violent area of Iraq. It had five incidents including IEDs aimed at an army convoy and a Hashd patrol, a tribal Hashd leader was assassinated, and a checkpoint was shot at. The biggest event however was an attack upon a Hashd headquarters in the Samarra district that left 6 casualties. IS has greatly picked up its operations in the province in recent weeks. In response there have been a slew of security sweeps with three this week, one in the east, one in west Samarra in the center, and the last in Yathrib in the south.

Baghdad Post, "A lawyer was assassinated by gunmen north of Baghdad,' 6/19/20
- "The assassination of an official in the clan crowd by gunmen south of Salahaddin," 6/19/20

Al Maalomah, "Anbar .. Launching a security campaign to purify desert areas of ISIS remains," 6/18/20
- "The crowd is conducting a maneuver on the Iraqi-Syrian border," 6/11/20
- "Killing and wounding 4 fighters from the Popular Mobilization explosion, southeast of Salahaddin," 6/20/20
- "A member of the crowd was killed and a soldier was wounded by ISIS sniper fire, east Diyala," 6/20/20
- "The PMF carries out an inspection to pursue ISIS remnants in Anbar," 6/16/20
- "The popular crowd announces the liberation of 3 kidnapped in an ISIS cave, west of Daquq," 6/16/20
- "The popular crowd purges two villages of ISIS waste east of Salahaddin," 6/22/20

Al Sumaria, "A member of the crowd was killed in an attack on a security checkpoint in Metibji, 6/16/20
- "The popular crowd carries out raids and searches west of Samarra," 6/17/20