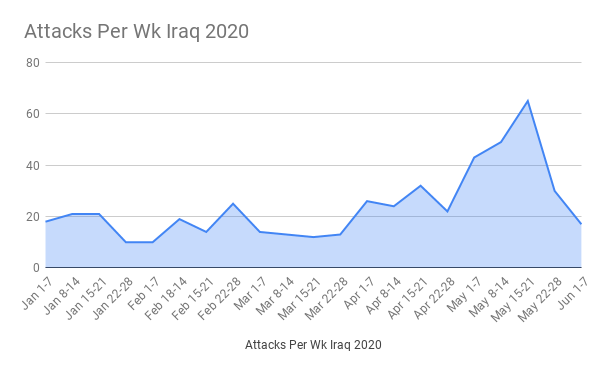 For the second week in a row violence dropped in Iraq. This might mean the sharp rise in attacks from April to May that reached 2018 levels might be over. On the other hand, the Iraqi forces conducted a large operation in the core areas where IS operates which could account for the drop. Only time will tell.


During the first week of June there were 17 incidents. That was the lowest amount since the fourth week of March before the Islamic State’s offensive started. That was down from 30 incidents the last full week of June, and a yearly high of 66 the week before that. There could be three reasons for the change. One is that the Islamic State’s offensive that started in May is now over. Two, this might be a temporary dip and incidents will go back up in the coming weeks as the insurgents usually carry out a spring-summer offensive lasting for several months. Third is that the recent government security operation called Iraqi Heroes caused the reduced number of incidents. The government forces went through the Waqf Basin in central Diyala, part of the Khanaqin district in the northeast, the Kirkuk-Salahaddin border in the southwest, the Hamrin Mountains and part of the Tuz Kharmato district in eastern Salahaddin. These are some of the core militant areas in the country. When the security forces move through an area IS steps back and then returns when they’re over. The coming weeks will tell which of these scenarios might be correct.
There were 32 casualties during the week. 4 Hashd al-Shaabi, 4 Iraqi Security Forces (ISF), and 5 civilians lost their lives. Another 2 civilians and 17 ISF were injured. Kirkuk had the most casualties with 14 followed by 10 in Diyala, and four each in Anbar and Irbil.

There were four incidents in Anbar. That included two gun battles, an IED upon a Hashd patrol, and mortars fired in the Rutba district in the west towards the Jordanian border. That was a lot of attacks for one week in the province. For example, there were 7 incidents total in January, 5 in February and 6 in March. Anbar is mostly used as a way station between Iraq and Syria but violence has increased with the new IS offensive. The army and Hashd carried out a sweep through the desert around Ramadi at the end of the week as well.

There were no incidents in Baghdad during the week. In May there was a large increase in incidents pointing towards another attempt by IS to infiltrate into the capital province. Again, it’s too early to tell whether that effort is over or not.

Diyala witnessed five incidents. There was a kidnapping, an infiltration attempt and a shooting in a town all in the Khanaqin district in the northeast, along with two other shootings in the Muqdadiya district in the center. Diyala is the main base for the insurgency in Iraq. Again, there were two large security sweeps that might have accounted for the low level of activity during the week compared to previous ones.

IS continues to hit the Makhmour district in southern Irbil. An army convoy was struck by an IED killing two soldiers and wounding two more. The insurgency has found gaps in the security in this area and are seeking to exploit it.

Three fields were burned in Kirkuk, and there were two more IEDs hitting the ISF. One bomb led to 10 police being wounded which was a very large amount of victims for a single IED. All of the incidents in the governorate take place in the south. That led to the Iraqi Heroes operation to start there on June 2 in an attempt to disrupt IS’s operations.

A suicide bomber was killed and an attempt to burn a field was stopped in Salahaddin. May saw a huge spike in violence in the governorate. Again, the Iraqi Heroes operation went through two parts of the province where IS is most active so that could account for the low level of activity.

Iraq Newspaper, "ISIS terrorists kills two members of the tribal crowd, a day after Ibn Anad visited Anbar," 6/5/20
- "The ISIS terrorists released kidnapped in Jalawla after execution of two others," 6/6/20

NINA, "3 ISIS Hideouts Destroyed, 5 IEDs Dismantled As Part Of Military Operation In The Waqf Basin In Diyala," 6/2/20
- "/3/ of police employees were injured in an armed attack in Diyala," 6/7/20
- "The army and popular crowd carry out an inspection operation in the Ramadi desert," 6/6/20- "The joint forces implement a security operation in Khanaqin, in Diyala," 6/3/20
- "An Attempt To Infiltrate ISIS In Naft Khana Basin In Diyala Thwarted," 6/1/20
- "Salah al-Din Operations Commander: The Joint forces enforce the blockade against ISIS in Hamrin," 6/2/20

Shafaaq News, "10 security personnel were injured in a bombing in Kirkuk," 6/3/20
- "The crowd kills an ISIS and wounded another, frustrating an ISIS operation north of Salahaddin," 6/5/20
- "Suicide bomber killed and ISIS leader arrested in Salahaddin and Ninewa," 6/5/20