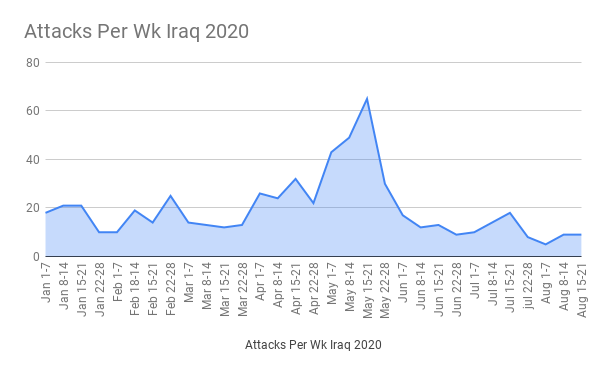 For the fourth week security incidents by the Islamic State were in single digits in Iraq. With no major security operations by the government going on the insurgents must be taking this time to focus upon rebuilding rather than combat. Pro-Iran groups continued their steady pace of operations against upon U.S. targets to coincide with Prime Minister Kazemi’s visit to Washington D.C.

There were a total of 14 incidents reported in the media from August 15-21. 5 of those were by pro-Iran groups. They fired rockets upon Camp Taji, the Green Zone and the  Baghdad International Airport. There were also two IEDs upon convoys carrying supplies to the Americans, one in Dhi Qar and the other in south Baghdad. One driver was killed in the capital as a result. Attacks picked up in June as the U.S. and Iraq entered talks for a new security agreement. August has had the most of any month so far with 17 to show defiance towards the premier meeting President Trump.

That left only 9 incidents by the Islamic State during the week. There was 1 incident in Anbar, 1 in Babil, 1 in Diyala, and 2 each in Kirkuk, Ninewa and Salahaddin.

13 died and 20 were wounded as a result. That was made up of 1 Hashd al-Shaabi, 5 civilians and 7 Iraqi Security Forces (ISF) that lost their lives and 6 civilians and 14 ISF that were injured. 21 of the 33 casualties were from the security forces which has been the pattern since Spring as IS has launched a war of attrition against the government’s forces to gain military superiority over the areas it operates in.

There was a shooting in the Garma district of eastern Anbar that killed a civilian. As usual, incidents were rare in the province since its mostly used as a logistics and smuggling hub for the Islamic State.

An IED killed a Hashd in the Jurf al-Sakhr district of northeast Babil. Previously IS was branching out to Hilla in the northern part of the governorate. Now it’s back to Jurf al-Sakhr which is a large Kataib Hezbollah base.

Diyala was quiet again the surest sign that the militants are holding back from operations currently. There was only one incident when an IED went off in the Muqdadiya district in the center leaving 4 soldiers wounded. Diyala is the core area of IS in Iraq and usually has the most incidents as a result. In August however there was only one incident the first week, 5 the next and then back down to one the third. In comparison there was an average of 6 incidents per week in July. The government did launch an operation in Muqdadiya, the second of the month. It’s not apparent that these are leading to the reduction in violence in Diyala however.

Two IEDs exploded in Kirkuk leaving two civilians dead and five wounded. Both occurred in the south where IS is most active. The group was never expelled from there during the war and now has de facto control over much of the area.

An old IED went off south of Mosul in the Shura sub-district wounding one civilian. Three more IEDs were discovered and dismantled in the same area. There were two security operations as well, one south of Mosul and one in the desert area in southwest Ninewa. Like Anbar, Ninewa is mostly used to move in men from Syria and carrying out smuggling to fund IS.

The two biggest incidents during the week happened in Salahaddin. First, there was a major attack upon the ISF in the Dujail district in the south. At first, it was reported as simply an IED, but then later the media said that gunfire was involved and lasted throughout the night. A total of 6 were killed, 5 from the ISF and another 8 ISF wounded. Next an IED went off in the Makhoul Mountains during a security operation that killed the provincial commander of the Counter Terror service along with another officer. Two more were wounded as well. In the last two months IS has been targeting senior officers of the Iraqi forces. For instance, last month a Hashd brigade commander was killed in the province.

AIN, "The popular crowd carries out a security operation to secure the villages south of Mosul," 8/18/20

- "A Popular Mobilization fighter was killed when an explosive device exploded north Babil," 8/19/20

- "Four civilians were killed and wounded in two explosions, west of Kirkuk," 8/16/20

- "An officer and a fighter of the Anti-Terrorism Service killed in an explosive device in the Makhoul Mountains," 8/21/20

- "A Preemptive Operation In The Desert Southwest Of Nineveh Governorate," 8/21/20

Al Sumaria, "13 civilians and police were killed and wounded in an explosive device explosion in Dujail," 8/20/20