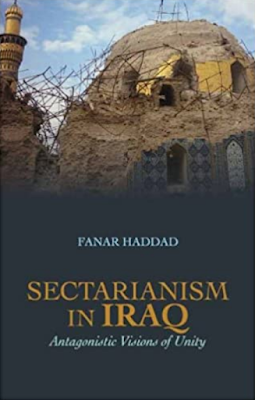 Sectarianism became the main way to explain Iraq after 2003. The new political system was based upon quotas for the different communities and then the civil war broke out. Many Westerners thought Iraq wasn’t a real country and should be broken apart because they believed the divide between Sunnis and Shiites was so deep the country could never come together. Fanar Haddad a visiting fellow at the London School of Economics wrote probably the best book on the topic Sectarianism In Iraq, Antagonistic Visions of Unity. The author begins by laying out his theory, gives some historical background, and then applies his ideas to the 1990s-2000s. Haddad tried to explain how sectarianism varies with time and place, is based upon competition over the state and society rather than theology, and the current situation was the result of the Iraqi state weakening during the 1990s and the aftermath of the 2003 invasion.

Haddad’s ideas about sect focuses upon what he terms myth-symbol complexes which are stories, histories and memories that define a group. Hussein bin Ali, the grandson of the Prophet Mohammed for example who was killed in the Battle of Karbala is used to express Shiite victimization. The celebration of his death was banned by the Baath and then celebrated after 2003 as an assertion of a newfound Shiite identity. By themselves there is nothing wrong with these practices. However in certain situations they can antagonize others and lead them to form competing identities. That’s what happened in Iraq over the last few decades.

Sectarianism In Iraq argues that when national identity falters like what happened in Iraq in the 1990s due to the 1991 uprising and the sanctions others like sect can rise in importance. During the revolt Saddam lost control of the entire south and then led a bloody repression, hyper-inflation hit due to the sanctions, Baathism lost all legitimacy, and the Faith Campaign increased religiosity and highlighted the differences between Shiites and Sunnis. This created an environment where many Shiites began to reject the state and claim victimization at the hands of Saddam. Talking about sect however was generally considered taboo in Iraqi society so these complaints were left to fester and only became public after 2003. Ideas about sect had been brought up before in Iraq. However it was this specific time Haddad writes that shaped what would happen next.

After the U.S. invasion everything changed. Sectarian identity was politicized. Shiites were able to add their iconography to the state. Ayatollah Sistani showed his influence over the country. The U.S. institutionalized sect by creating quotas for the government with Shiites having the majority of positions. Sunnis on the other hand faced an identity crisis. The Iraq that they had known for generations no longer existed. They feared the emergency of Shiite identity and their parties. Because of years of Baathist propaganda they associated Shiites with Iran the archrival of Iraq. Sunnis felt they had to respond in kind. The occupation meant this took a violent turn as anti-U.S. attacks became anti-Shiite. The mistake many Westerners made which Haddad hoped to correct was that they took the 2000s as how Iraq always was rather than being a specific time. The book lays out how this was a conflict of myth-symbols as the two communities created their own divergent stories. This didn’t mean they didn’t believe in Iraq anymore. Both would make all kinds of claims to Iraqi nationalism. Rather they were competing to see who could control the state and culture.

Sectarianism In Iraq is a must read. It makes a convincing argument that the current sectarian divide isn’t the result of an age old division between Sunnis and Shiites but rather came out of the environment created in the 1990s. This was when a new Shiite identity emerged. Sunnis would follow suit the next decade. The two were created in opposition as the two competed for control of Iraqi society and government. The book is part academic as it goes through theories on identity, ethnic conflict, etc. It’s part history as it covers the 1990s-2000s. The rest is analysis as it shows how myth-symbols were deployed in speeches, poems, songs, and in interpreting the past. All together it is one of the few books that makes sense of the country’s identity politics.