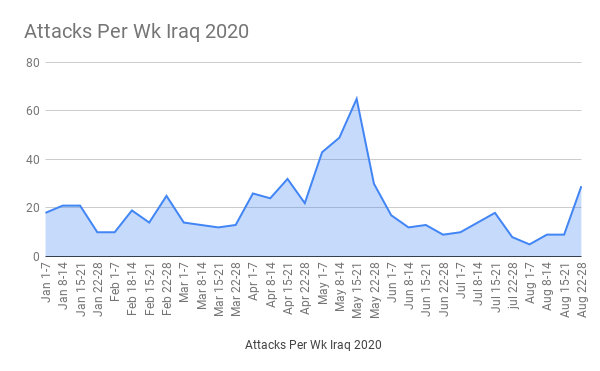 After two months of Iraq being relatively quiet security incidents suddenly shot up in the last week of August. This could be the start of a late summer offensive, but it’s still too early to tell.

Pro-Iran groups conducted three attacks during the week. They were all in Baghdad where two convoys carrying supplies to the Americans were hit by IEDs and rockets fell on the Green Zone. In June these units started a new wave of operations as the United States and Iraq entered negotiations over a new security agreement which Tehran opposes. In August the prime minister went to Washington D.C. and met with President Trump and the pro-Iran groups responded with 20 attacks to embarrass the premier.

Those left 23 dead and 41 wounded. 2 Hashd al-Shaabi, 10 civilians, and 11 Iraqi Security Forces (ISF) lost their lives and another 2 U.N. workers, 5 Hashd, 16 ISF, and 18 civilians were injured. As usual 34 of the 64 dead and wounded were from the security forces as IS has launched a war of attrition against them. Diyala had the most casualties with 27 followed by 14 in Kirkuk, 11 in Anbar, 6 in Ninewa, and 4 in Salahaddin.

A sign that IS might be up to something new was the four incidents in Anbar. Some IEDs were dismantled in the Rutba district, an IED killed 3 civilians, a checkpoint was attacked and there was a gun battle both in the Qaim district along the Syrian border. There was also a security sweep through that area and another in the western desert. Previously there had only been one incident the third week of August, one the week before that and none the first week of the month. That is the norm because the province is mostly used for logistics and smuggling by the insurgents. When there are four incidents in one week then, that definitely points to an increase in IS activity that could be the sign of something bigger happening in the rest of Iraq.

Government forces went through Tarmiya which is in northern Baghdad. While IS has given up on infiltrating the capital there are still cells in the outlying areas. Tarmiya is one of them. That last attack in the province by militants was in that area.

Diyala returned as the center of IS in Iraq. There were 15 incidents spread across the province with 7 in the Khanaqin district in the northeast. They included some trucks being stopped, burned, and four drivers kidnapped with three later found dead. There were also two mortar attacks upon villages, two villages assaulted, and six checkpoints shot at. One of the attacks upon a checkpoint resulted in a Hashd commander being killed. Part of IS’s on-going war of attrition versus the government’s forces is the targeting of high ranking officers. The previous week the Counter Terror chief of Salahaddin was killed.

An IED left two soldiers wounded in Makhmour in southern Irbil. During the spring offensive IS was hitting Irbil every week looking for weak spots between the Iraqi and Kurdish forces. Then it suddenly stopped. A new attack there is another sign that IS might be picking up operations.

There were two incidents in Kirkuk. An IED left six wounded in Kirkuk city and there was a gun battle in the Sadiya area that killed 4 police and wounded 4 more. There was a security sweep as well. Sadiya is in the south where most of the violence takes place. Every now and then however there is an incident in Kirkuk city.

Four IEDs detonated in Ninewa. There were spread across the south and west. This included one incident where two United Nations workers were wounded. Government forces also went through the Qayara and Shura areas in the south and Mosul.

A sniper shot at a checkpoint, an IED went off, and there was a gun battle in the Samarra district of Salahaddin. Government forces also went through that last area.

- "Four Kurdish Civilians Executed by IS after Being Kidnapped from Disputed Areas," 8/27/20

Iraq Newspaper, "The terrorists ISIS launch a dawn attack on the 41st Brigade Asaib Qais in the Tal al-Dhahab area, south of Samarra," 8/27/20

- "The arrest of ISIS members in preemptive security operation in western Anbar," 8/23/20

- "The Popular Mobilization Forces foils an infiltration attempt by ISIS south of Samarra," 8/27/20

- "The Popular Mobilization Forces carry out a search operation to pursue ISIS southwest of Kirkuk," 8/27/20

- "The Popular Mobilization Forces carry out a security operation in search of wanted persons on the right side of Mosul," 8/27/20- "The Shiite crowd is chasing ISIS in Tal Salima, Diyala," 8/26/20

- "Three civilians, including two children, were killed when a landmine exploded in western Anbar," 8/22/20

- "Four soldiers were killed and wounded in an ISIS attack on a military post northeast of Baqubah," 8/27/20

- "A number of terrorists were killed and wounded in a security operation north of Baghdad," 8/23/20

- "Three people from one family were injured in a bomb explosion in Diyala," 8/26/20

- "Three Soldiers Killed And Wounded In An ISIS Attack Northeast of Baquba," 8/25/20

- "Thwarting an attempt to target the military convoys with IEDs in Rutba in Anbar," 8/25/20

- "Two civilians were injured in an explosive device explosion south of Mosul," 8/26/20

Al Sumaria, "Security media: A bomb exploded on a company contracting with the International Coalition near Taji," 8/23/20