Vincent, Steven, In The Red Zone, A Journey Into the Soul of Iraq, Dallas: Spencer Publishing Company, 2004 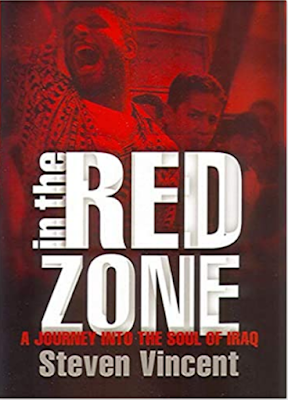 In The Red Zone, A Journey Into The Soul of Iraq was written by freelance journalist Steven Vincent. The author travelled to Iraq twice from 2003-04 and talked almost exclusively to Iraqis about how they were feeling. That was how the book was sold, but that was misleading. What he actually wrote was a diatribe to justify his support of the invasion of Iraq. Vincent lived in New York City on 9/11 and saw the attack as an act of evil that the U.S. needed to avenge. He argued that Arabs were backwards and their world needed to be shaken up by invading Iraq and bringing them democracy. Rather than explaining what Iraqis told him he used them as foils to argue his views that Iraqis welcomed the invasion, that people that were against the invasion were anti-American, and those that were fighting the U.S. in Iraq were Islamofascists.

The first few chapters of the book reveal Vincent’s intent. The first chapter is about how almost every Iraqi he met supported the invasion. The first was an ex-pat family returning to Iraq from Vienna who said that people would have never protested against the war if they knew what Iraq was like under Saddam. Then there was Qasim who ran an art gallery in Baghdad who publicly disliked the Americans, but privately told Vincent that maybe they were carrying out God’s will. The author went to a café and met intellectuals who were all pro-war. One cab driver even refused to accept his pay because Vincent was an American. He did say that a few Iraqis were negative about the new Iraq but they tended to be Sunnis. Right after the invasion there were people who were happy with the change in regime. The problem is the more you read into the book the more apparent it was that Iraqis talked against the U.S. and called it an occupation all the time which annoyed Vincent to no end. It’s the first hint that In The Red Zone isn’t really about what Iraqis said, but portrays what Vincent wanted to see. That’s far more apparent in the following sections.

When Vincent discussed the insurgency he dropped all pretentions that he was simply writing about Iraqis and revealed that the book was really about himself. He wrote that opposition to the U.S. occupation was illegitimate and was the result of the Arabs sense of victimization, their tendency to be violent, and their small mindedness born out of tribalism. He felt that Iraqis were full of defeatism and impotence for having been invaded and not being able to remove Saddam themselves feeding into their ideas of being victims and wanted to save face via armed resistance. He admitted that the U.S. made some mistakes in Iraq, and that Sunnis resented their loss of power, but the real issue was the backwardness of Iraqis. He said it was incomprehensible that Iraqis would not welcome their liberation by the Americans. In fact, he even rejected the term occupation claiming that was anti-American and created by the media. He argued that there couldn’t be a resistance or an insurgency in Iraq when they were fighting against democracy. Instead he thought they should be called Islamofascists. This was a perfect example of the author using his trip to Iraq to give his ideas bonafides. These weren’t the results of Vincent listening to Iraqis and trying to understand them. Rather it was him using them to explain why he thought the Middle East created evil like 9/11 and the Iraqi insurgency. He projected his ideas about the Iraqis and even admitted as much in his conclusion.

The author’s other favorite topic was the skewering of the anti-war movement. Vincent had a long list of people that he felt were against the Iraq invasion including NGO workers, the western media, pacifists and hilariously Canadians. He wrote about how they would talk bad about the Americans and their crimes in Iraq but never the crimes of Saddam and the insurgency which proved their were simply anti-American at heart. He gets in a self-righteous fervor every time he talks about them and then condemns them for being sanctimonious. All this originated from his desire for people to celebrate the liberation of Iraq. He therefore had no place for any opponents to the invasion. Again, this had nothing to do with Iraqis he met and what they felt but was rather another part of his argument. He saw the U.S. in a struggle against evil and therefore no sane person could stand against it. The only reason why they would was because they hated America.

In The Red Zone turns out to be one long diatribe. Vincent’s discussions with Iraqis gets lost in his condemnations of what he termed their unreasonable nature. In his conclusion he wrote that the United States needed to strike deeper into the Iraqi nation and culture to destroy their tribalism, sectarianism, and tradition so that they would have the chance to embrace democracy and spread it across the Middle East. Arguing this point was why he wrote the book not to discover what Iraqis were saying. Anyone that opposed him whether that be anti-war advocates, the media or Iraqis were summarily dismissed as being anti-American. In his eyes the U.S. was going to change the Middle East whether it liked it or not. He didn’t care what Iraqis thought because they were backwards anyways and needed to be forced out of their worldview. This hubris was exactly the kind of thinking that led to the invasion in the first place.