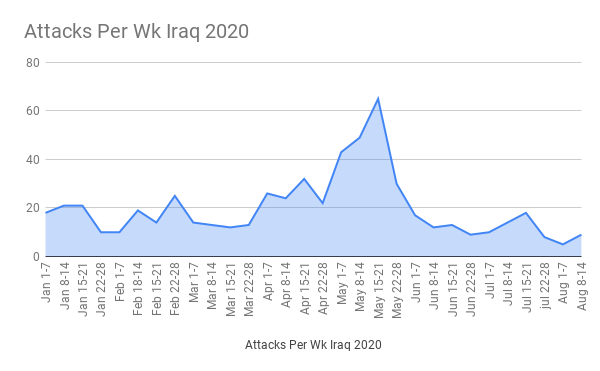 For the third straight week Islamic State security incidents were in the single digits. This represents a new low for insurgent activity since 2003. At the same time pro-Iran groups are picking up attacks and accounted for almost half the incidents the second week of August.

There were 19 incidents reported in Iraq from August 8-14. 8 of those were by pro-Iran groups. During the week they launched rockets against Balad Air Base in Salahaddin, Baghdad International Airport, twice against the Green Zone, although one of those resulted in the rockets landing in the Tigris River, and three convoys carrying supplies to the U.S. were struck by IEDs in Basra, Dhi Qar, and Diwaniya. These groups, likely connected to Hashd brigades, have increased their attacks this month. There have been a total of 15 so far in August versus 12 in July, 8 in June and 2 in May. This was prompted by Baghdad entering into negotiations with the United States over a new security agreement. Prime Minister Mustafa Kazemi is planning a visit to Washington D.C. soon to continue those talks probably provoking the uptick this month.

7 people were killed and 22 were wounded the second week of August. That was made up of 1 Hashd al-Shaabi, 1 Iraqi Security Forces (ISF), and 5 civilians that lost their lives along with 6 Hashd and 16 civilians that were injured. This is the first time in months that civilians (21 total) outnumbered security forces (8 total) in casualties. The Islamic State is currently launching what it calls a war of attrition against the government’s forces and they have routinely had the most dead and wounded each month since Spring as a result.

In Anbar, an IED went off in the Ana district in the north along the Euphrates River that left one dead. There are few incidents in Anbar as IS mostly uses it to move in men from Syria into Iraq. It’s also an important way station in the militants smuggling between the two countries.

Besides the four pro-Iran incidents in Baghdad there was also a shooting death in Tarmiya in the north. IS has largely given up on infiltrating into the province although it still has cells in the north, south and west. That has meant pro-Iran groups are usually responsible for most of the attacks there.

Diyala returned to the most violent area of the country. There were five incidents total including a wedding procession that was ambushed that left one dead and 5 wounded, a shooting of two cars that left seven wounded, an attack upon a checkpoint, a civilian dying from gunfire, and an IED that hit some Hashd. Three of the incidents took place in the Muqdadiya district in the center, one in the Khanaqin district in the northeast, and one in the Baquba district in the southwest. The government also conducted a sweep through northern Muqdadiya. IS has de facto control of many of the rural areas of Muqdadiya and Khanaqin and have driven out hundreds of families and emptied dozens of villages. This provides it the perfect environment to rebuild itself and is the reason why Diyala regularly has the most attacks.

Two villages were attacked in the Hawija district of southern Kirkuk. In the town of Majid, IS wounded two civilians and set up an IED along the road where the security forces responded which left 1 police and 4 Hashd dead. Like Khanaqin and Muqdadiya in Diyala, IS has influence over Hawija which it was never cleared from during the war.

There was only one incident in Ninewa when an IED exploded west of Mosul. Like Anbar, Ninewa is no longer a battlefront but is now part of the Islamic State’s logistics network as its used to bring in men and supplies from Syria along with smuggling to raise funds.

The deputy governor’s house was shot at in the Ishaqi district of southern Salahaddin. The government forces continued to sweep through the Samarra district as well. Attacks in Salahaddin have gone up and down over the months. It is no longer a major battlefront however.

- "Diyala … the death of one of the wounded in the Abu Karma wedding ambush, and demands for the spread of the popular crowd," 8/12/20

NINA, "2 Fighters Of The Popular Mobilization Forces Wounded By An Explosive Device In Diyala," 8/10/20

- "A military operation to track down ISIS remnants carried out in the villages of northern Muqdadiya in Diyala," 8/9/20

- "An officer was killed and four civilians and members of the Popular Mobilization Forces were wounded in an ISIS attack west of Kirkuk," 8/11/20

- "The Popular Mobilization Forces Carry Out Raid And Search Operation West Of Samarra," 8/10/20- "Targeting the Green Zone with a Katyusha missile," 8/11/20

NI-"A Tribal Mobilization Fighter Martyred In An ISIS Attack On A Checkpoint on The Outskirts Of Muqdadiya, Diyala," 8/13/20

Al Sumaria, "A civilian was killed when an explosive device exploded west of Ramadi," 8/13/20