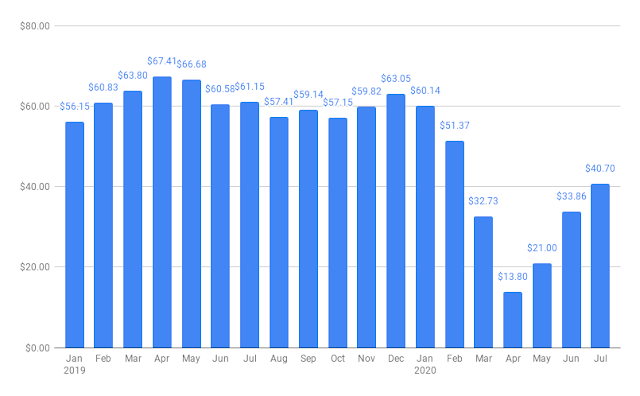 Ahmed Tabaqchali, the CIO of Asia Frontier Capital Iraq Fund and an adjunct assistant professor at the American University of Iraq Sulaymaniya wrote another very interesting piece on the institutional dilemmas facing Iraq’s economy. He argued that the Iraqi elite are on course to bankrupt the state in order to maintain their power.

The dilemma Iraq is facing is that the budget as currently constituted is unsustainable. The ruling parties keep adding jobs, pensions, and increasing their pay. These are all used in patronage networks to maintain support for the elite. The dilemma comes from the fact that the oil industry collapsed with the Saudi-Russia dispute that led to a short production war and then the COVID-19 pandemic that cut off demand. The International Monetary Fund estimated that the coronavirus will have a much deeper effect upon the global economy than previously believed. Tabaqchali shares that opinion writing that there will be sluggish growth for years afterward like what happened after the 2008 recession. That means that oil prices will not recover anytime soon, which is devastating for Iraq the most oil dependent country in the world. Over 90% of its revenues come from petroleum sales. Without the business recovering there’s no way the government can pay for the ever expanding spending the elite demand.

The article provided some numbers to show how deep in the hole Iraq is. At 2019 levels public salaries and pensions would cost $50 billion. Oil Investment would be another $16 billion. That could be cut to a minimum of around $10 billion to keep the industry going which is paramount to the Iraqi economy. That compared with Iraq’s revenue of only around $39 billion a year if oil was going for around $40 a barrel. In the first six months of 2020 Iraqi crude has averaged $35.48 per barrel and sold for $33.86 in June. Prime Minister Mustafa al-Kazemi has said that his administration is seeking to boost the non-oil sectors, but this has been repeated by all his predecessors with little to show for it. Tabaqchali writes that part of the economy could only bring in $10 billion a year at best. There is also still costs for services and investment. All together the author thought Iraq would be running about a $33 billion deficit. Baghdad is unlikely to be able to borrow that much and raiding the foreign reserves that stand at $62 billion would only last just over a year before they got too low.

What is the government doing about this situation? Nothing because the ruling parties won’t allow any serious reform. PM Kazemi tried a 10% cut in salaries and pensions for most public employees in June, but parliament blocked the order. That was a sign that the political parties wouldn’t accept any changes even the smallest cut to their patronage networks. Instead, their general feeling is that oil prices will recover and things will return to normal. Iraq has never been good at strategic planning because the elite are only focused upon their short term survival. That depends upon maintaining jobs, pensions and government contracts to their followers. The elite are acting like the story of the Emperor of Nero who was said to have fiddled while Rome burned.