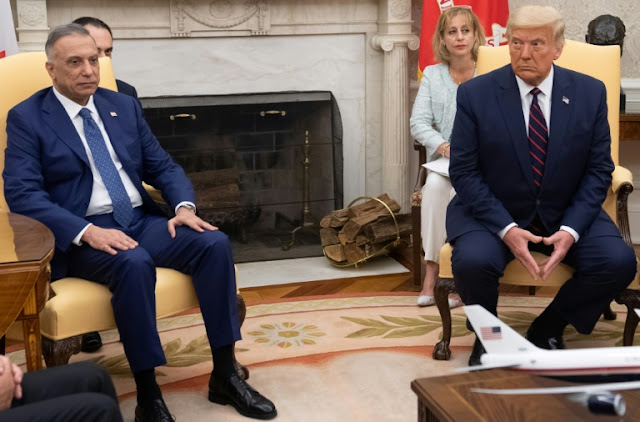 Iraq’s Prime Minister Mustafa al-Kazemi recently paid a trip to the United States to meet with President Donald Trump. The two countries are in negotiations for a new security agreement. Iran objects to these talks and wants the U.S. to leave and therefore has ordered its proxies to pick up attacks upon American targets in Iraq. Those same groups are carrying out an intimidation campaign against protest activists in the country as well. Both of these are meant to humiliate the premier and show that he has no control over them. They are doing an effective job.

The attacks on U.S. targets started in early June. That began with a rocket attack upon the Baghdad International Airport on June 8. There were 8 such incidents in June, 9 in July  and 10 from Aug 1-23. This tactic has been used for years by groups linked with Iran dating back to the U.S. occupation when the Mahdi Army and Special Groups used to lob rockets at the Green Zone all the time. A twist was added in July when a convoy carrying supplies to the Americans in Muthanna was attacked on the 11th. That was followed by an IED used against another convoy in Dhi Qar on July 22, which has now become the norm with 8 more occurring in August. When these attacks started Prime Minister Kazemi promised the perpetrators would be found. That led to a raid upon the offices of Kataib Hezbollah, one of the organizations widely believed to be behind these incidents in Baghdad a few days later, but the men arrested were turned over the Hashd Commission and released with no punishment. The Hashd are only nominally under the command of the prime minister. The Kataib Hezbollah episode showed how precarious that situation is. The government has taken no action since then even though these attacks have increased from 8 in June to 12 in July to 19 from August 1-23. Iran has ordered these attacks to show its disapproval of the American presence in Iraq and that it can hit U.S. targets in the country anytime it wants. The surge in August was timed to coincide with Kazemi’s trip to Washington D.C.

Even more embarrassing for the Iraqi leader was the latest wave of assassination of social activists. In July, the annual protests began demanding electricity and water, wages to be paid to public workers, contract workers to be given full time jobs, and for better governance and accountability. Immediately pro-Iran groups, which have accused the demonstrators of being American puppets started a campaign to terrorize those involved. That started on July 16 when an activist was kidnapped in Baghdad. Then a series of assassinations and bombings began across Babil, Basra, Dhi Qar, Diyala, Maysan, and Wasit. That was topped off by a bomb placed outside an activist’s house in Dhi Qar and the assassination of a woman doctor involved in the protests and two of her friends being wounded in a shooting in Basra City on August 19 the day Kazemi arrived in America. Then three more people escaped an assassination attempt the next day in Babil. That led the State Department to issue a statement condemning this campaign of murders. Here Tehran’s allies achieved exactly what they wanted. What should have been a trip centered around U.S.-Iraqi ties was overshadowed by the deaths of protesters. Again, the prime minister ordered a crackdown, this time in Basra, but it’s questionable whether anything will be achieved especially because attacks have occurred in six other provinces.

Kazemi was already in a difficult situation when he took office. He has no political party. He runs an interim administration until the next elections. The country is facing the greatest economic crisis since 2003, and some of Iran’s allies blamed him for helping with the deaths of Iranian Revolutionary Guards Quds Force commander General Suleimani and the deputy head of the Hashd Commission Abu Muhandis. Now he’s directly being challenged by some members of the Hashd who are thumbing their noses at his authority. His warning to Kataib Hezbollah completely failed, and he has not called out any specific group since then. It’s unclear whether he wants a direct confrontation with them or not and what that means for the future of his government.

- “Iran Labelled Iraqi Female Activist as “US Mercenary” Before Her Assassination: Report,” 8/20/20

- “A campaign to liquidate Basra activists … the assassination of Dr. Reham Yacoub and her friend by unknown fire,” 8/19/20

- "Insurgents burn 3 vehicles shipping for American forces in Al-Muthanna on the international highway," 7/11/20

Al Nasiriya, “A civilian activist in the city of Nasiriya was subjected to a failed assassination attempt,” 8/15/20

- “Gunmen Target The House Of A Civilian Activist With An RPG In The Center Of Maysan Governorate,” 8/4/20

- "A Katyusha rocket prepared for launch was found in one of the Baghdad areas," 7/31/20

- "A Missile Prepared To Be Launched Towards The Green Zone, Found And Dismantled East Of Baghdad," 7/10/20

- “Three activists survived an assassination attempt with silencer weapons in the South Hilla,” 8/20/20

Al Noor, "An Explosive Device Targeting A Truck Carrying Equipment For The American Army In Nasiriya," 8/4/20

Shafaaq News, "A missile landed in the vicinity of Baghdad International Airport," 6/8/20

- "Targeting a camp near Baghdad with two Katyusha rockets," 8/3/20

- “An “unknown” force raids the home of a civilian activist who participated in demonstrations in Diyala,” 8/15/20

Al Sumaria, “The killing of a civilian activist in an armed attack in central Basra,” 8/14/20

- "Security media: A bomb exploded on a company contracting with the International Coalition near Taji," 8/23/20

Wataniq, “The assassination of the civilian activist Mohammed Zamel in Baghdad,” 8/21/20